As part of their Montreal game showcase announcements, NVIDIA has announced that their GeForce ShadowPlay feature will finally be getting a beta release date - October 28th - along with some additional game streaming functionality beyond what was initially announced.

ShadowPlay, as you may recall, is NVIDIA’s hardware encoding enabled video recording utility that’s part of their GeForce Experience software utility. ShadowPlay was first announced back at the launch of the GTX 780 in May, and is intended to be NVIDIA’s take on video recording while leveraging their NVENC hardware H.264 encoder. By using their hardware encoder as opposed to software encoding as is almost always the case on existing utilities, the overhead from recording should be significantly reduced, thereby making recording a nearly free operation. NVIDIA’s goal is to support both traditional recording and a 20 minute always-on rolling window recording, to capture and save footage after the fact. Video recording in this manner has always been something of an obvious use of the technology at hand, but ultimately it’s not something that anyone has seriously attempted at implementing until now. 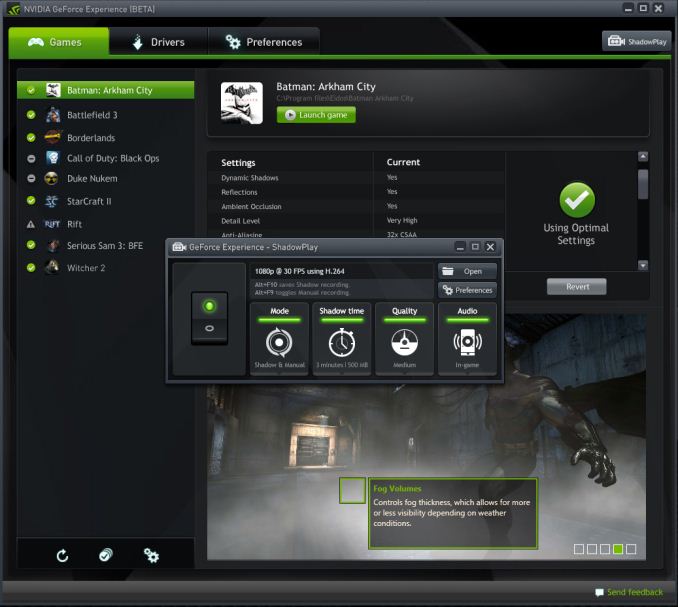 Moving on, along with the previously planned recording features the release version of ShadowPlay will also be receiving some additional game streaming features that have been added in the interim. Twich.tv support is being integrated into the client, allowing ShadowPlay to be used to broadcast to the popular game streaming service. Like video recording software in general, Twitch clients are primarily software driven, so the idea here is to leverage ShadowPlay and the NVENC hardware to offer Twitch streaming without the heavy overhead those clients incur. Their ShadowPlay implementation should be fast enough, NVIDIA tells us, that it will have no problem streaming out to Twitch at 60fps while still keeping the impact to the recording PC minimal. 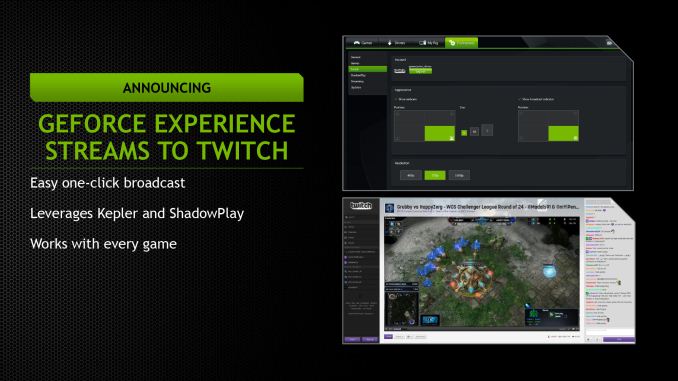 The beta for the initial version of ShadowPlay will be released on October 28th, which happens to coincide with the launch of the company’s holiday game bundles. NVIDIA is not committing to a release on the Twitch functionality however, so all indications right now are that it won’t be in the initial version. As always we’ll have more details on the client once it’s closer to launch.

On a side note, as our regular readers are aware this release is months later than NVIDIA originally planned, as ShadowPlay was originally intended to be released over the summer. However the client ended up being delayed after NVIDIA realized that their initial plans to use M2TS container files would be problematic due to the fact that the container format isn’t well supported by 3rd party software, particularly Windows Media Player. As a result the company has gone back to the drawing board and changed the client to use the more ubiquitous MP4 container format, which will bring with it much greater compatibility at the cost of delaying the client in order to implement the necessary changes.