Asus ships their TOP card card at 970MHz for the base GPU clock, 1070MHz for the GPU boost clock, and 6400MHz for the memory, which compared to the R9 280X reference clocks is a very significant overclock of 120MHz (14%) for the core clock, 70MHz (7%) for the boost clock, and 400MHz (7%) for the memory overclock. The narrowing of the gap between the core clock and the boost clock is particularly interesting, as it means the Asus card operates in a smaller range of clockspeeds than reference cards do (100MHz versus 150MHz). The core overclock in particular virtually guarantees that the card will be operating at higher clockspeeds than most reference clocked 280Xs when they’re boosting, never mind when the Asus card is also boosting. The fact that PowerTune Boost on the 280X is equivalent in operation to how it was on the 7970GE – which is to say opaque – means that it’s difficult to predict exactly how this overclock will affect its performance, so for that we’ll have to turn to our performance numbers later. 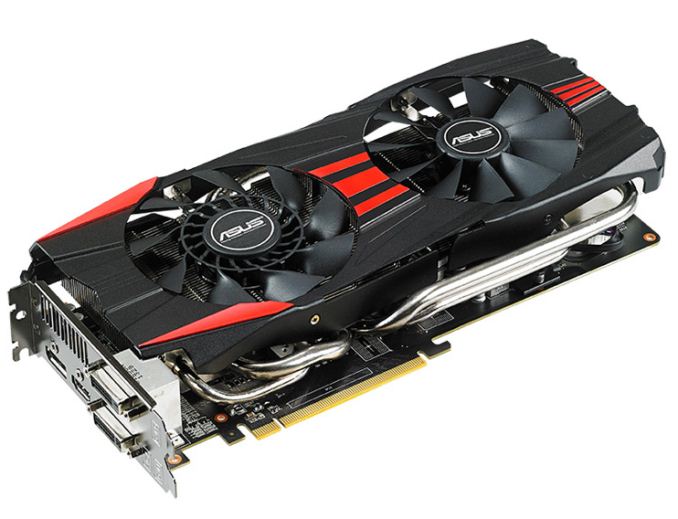 Diving into the design of the 280X DCUII TOP, while Asus’s design is fundamentally yet another dual fan open air cooler, upon further examination it’s clear that for their design Asus has gone with something that can safely be described as exotic and unusual. This is almost immediately apparent in looking at their DirectCU II cooler, or more specifically the fans on it. While the right fan is a standard 95mm axial fan, the left fan is a 100mm fan that is easily the oddest fan we’ve seen in quite some time.

Asus calls it “CoolTech” and it’s essentially an effort to build a fan that’s both an axial fan and a blower (radial) fan at the same time, explaining the radial-like center and axial-like outer edge of the fan. Asus tells us that they’re shooting for a fan that can move air over a wider angle than a traditional axial fan, and while we’re hardly qualified to evaluate that claim, it is regardless certainly something we’ve never seen before. 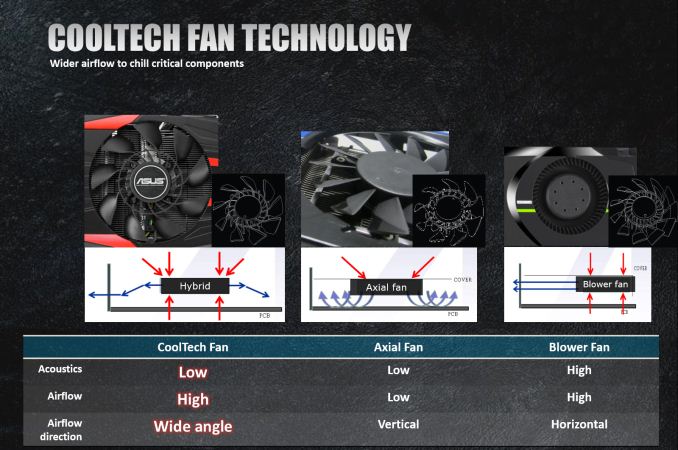 Asus’s choice in fans aside, for their 280X card Asus has also gone with a fairly large single segment heatsink to provide heat dissipation for their GPU. The DirectCU II heatsink itself measures 10.5 inches and brings the total length of the card out to about 11.5 inches. Embedded in the heatsink are 5 heatpipes that run between the GPU core and various points on the heatsink, the largest heatpipe measuring 10mm in diameter. Meanwhile a smaller separate heatsink is mounted to the MOSFETs on the board to provide cooling for those, with the Hynix 6GHz GDDR5 RAM chips running bare. Asus tells us this design is 20% cooler and much quieter than the reference design for 280X, but since that design isn’t in retail it’s something of a moot point as Asus’s competition will be other custom designs. 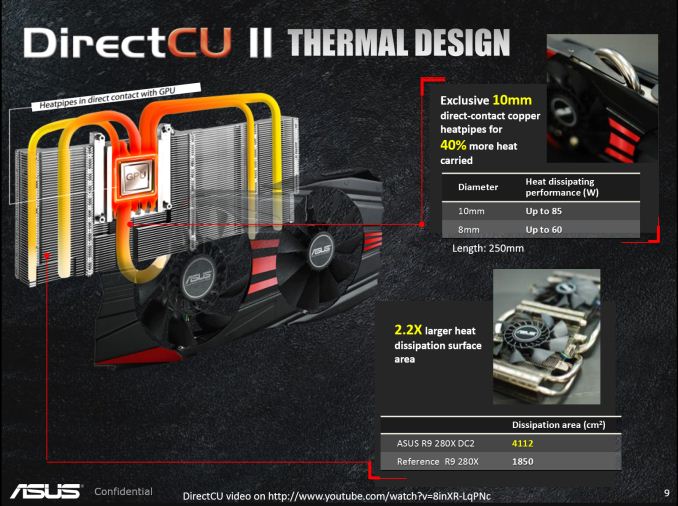 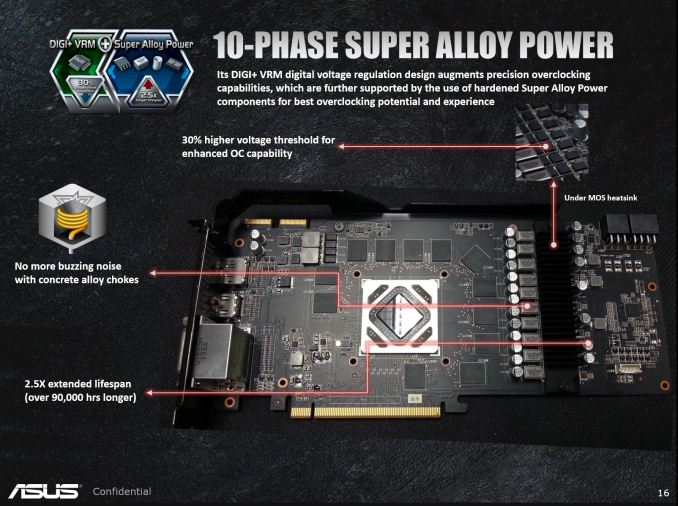 Moving on, like most of Asus’s customized high-end cards the company has outfit the 280X DCUII TOP with their DIGI+ digital VRM management IC and Super Alloy Power discrete components. As to be expected, Asus is promoting these component choices as improving overclocking stability while further improving the lifespan of the components themselves. Perhaps more importantly, Asus has gone with a 10 phase power implementation on their card to give the card more overclocking headroom on the power side, outfitting the card with 8 power phases for the GPU as opposed to the typical 5 phases, and the same 2 phase memory/IO setup. As we’ll see in our look at performance and power consumption Asus already seems to be running this card at over 250W, so even before end-user overclocking they’re already making use of their own overclocking headroom to provide the factory overclock and the power needed to operate it.

Speaking of overclocking, the 280X DCUII TOP comes with Asus’s GPU Tweak overclocking software for further end-user overclocking. This is the first time we’ve seen their GPU Tweak software in a video card review, and it’s clear right off the bat that they’ve been watching MSI closely and have implemented something very similar to MSI’s Afterburner software. 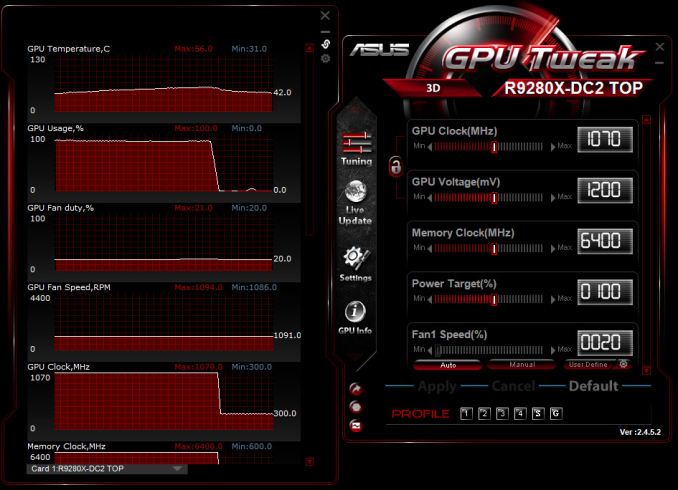 The end result is a very competent overclocking suite that offers all of the overclocking and monitoring functionality we’ve come to expect from a good overclocking utility, including a wide array of monitoring options and support for GPU voltage control. Asus’s taste in skins is unfortunate – a low contrast red on black – but otherwise the UI itself is similarly solid. To that end GPU Tweak won’t match Afterburner on some of its more fringe features such as recording and overlays, but as a pure overclocking utility it stands up rather nicely.

On a side note, Asus also throws in a live streaming utility called GPU Tweak Streaming, apparently aimed at the DOTA/League of Legends/Let’s Play crowd. Having no real experience with such utilities I can hardly comment on it, but at a superficial level it seems to do what it’s supposed to.

Moving on, let’s briefly talk about I/IO options. In a slight deviation from what we normally see for a Radeon card, Asus has dropped the two Mini DisplayPorts for a single full-size DisplayPort. Given the seemingly random nature by which various board partners go about choosing which port to use we can hardly speculate on why this is, but all things considered I’m not sure why Asus would want fewer connectivity options. This leaves Asus with 2x DL-DVI, 1x HDMI, and 1x DisplayPort 1.2 for connectivity, for a total of 4 ports.

Winding things down, I also wanted to quickly call attention to a couple of specific design decisions Asus made with their card. The first is a rather useful change Asus made with their PCIe power connectors. Asus has reversed the power connectors so that they’re facing the rear of the card rather than the front, and consequently the clips on the plugs don’t dig into the heatsink. This is the first time we’ve seen anyone reverse the connectors like this, and it’s a handy change that makes unplugging the card much easier. And as a side benefit, they’ve also put LEDs on the card that indicate whether there is a working PCIe power connection, just in case you’re the forgetful type who doesn’t always remember to plug in those connectors (like myself). 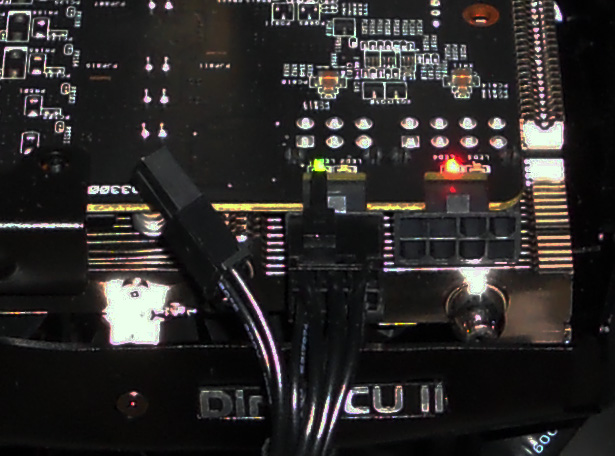 At the same time however the odd shape of the shroud over the card deserves a brief mention for an opposite reason. Getting the PCIe plugs in and out will be easy, but with the shroud sticking up almost an inch and a half towards the front of the card, screwing and unscrewing the card’s bracket requires nimble fingers or a good magnetized screwdriver, making it more difficult (though by no means impossible) than it really should be.

Finally, let’s quickly talk warranties and pricing. Asus is offering their standard 3 year warranty with this card, which although is not quite as long as XFX’s warranty is at least typical for this industry. Meanwhile on pricing Asus has very much gone for the kill, pricing the card at just $10 over MSRP, or $309. As we’ll see the factory overclock alone is good for a several percent improvement in performance over a stock 280X, never mind Asus’s cooling performance and value added features such as their software. Although this is hardly a representative sample of all 280X cards on the market, in this light the 280X DCUII TOP is looking especially good.