I ran the i7-4650U based 13-inch MBA through the same suite of battery life tests as the un-upgraded base model. What's important to note about all of these tests is that the amount of work done per cycle of the test doesn't vary based on performance. There's enough idle time baked in to make sure that the Core i7 based 13-inch MBA isn't artifically penalized by having to do more work than the i5 model simply because it's faster. The other thing I noticed while testing these two machines is that although both were equipped with the exact same Samsung panel, their brightness curves were slightly different. At the same brightness setting under OS X (or Windows 8), both panels responded differently. Both were capable of similar max brightness values but it's clear that either Apple is doing some calibration here that's panel lot specific or there's a significant variance in how these panel/backlight/electronics combinations respond (or both).

I reproduced the battery life test details below:

The light and medium suites are inherently related - they use the same workload and simply vary the aggressiveness of that workload. The light test hits four different websites every minute, pausing for nearly the entire time to simulate reading time. Flash is enabled and present on three of the sites. The long pause time between page loads is what really makes this a light test. Web browsing may be the medium for the test but if all you’re doing is typing, watching Twitter update and maybe lazily doing some other content consumption this is a good representation of the battery life you’ll see. It’s a great way of estimating battery life if you’re going to be using your notebook as a glorified typewriter (likely a conservative estimate for that usage model).

The medium test hits the same webpages (Flash and all) but far more aggressively. Here there’s less than 10 seconds of reading time before going onto the next page. It sounds like a small change but the impact on battery life is tremendous.

Both the light and medium tests are run in their default state with processor graphics enabled, as well as with the discrete GPU forced on. I run with the dGPU on as well because it’s far too often that a single application open in the background will fire up the dGPU and contribute to draining your battery. The goal here is to deliver useful numbers after all.

The final test is very similar to our old heavy multitasking battery life tests, but with some updates. Here I’m downloading large files at a constant 1MB/s from a dedicated server, while playing back a looped 1080p H.264 movie (the Skyfall trailer) all while running the medium battery life test. The end result is a workload that gives you a good idea of what a heavy multitasking usage model will do in terms of battery life. I’ve found that OS X tends to fire up the dGPU anyway while running this workload so I saw no reason to run a separate set of numbers for processor and discrete graphics. 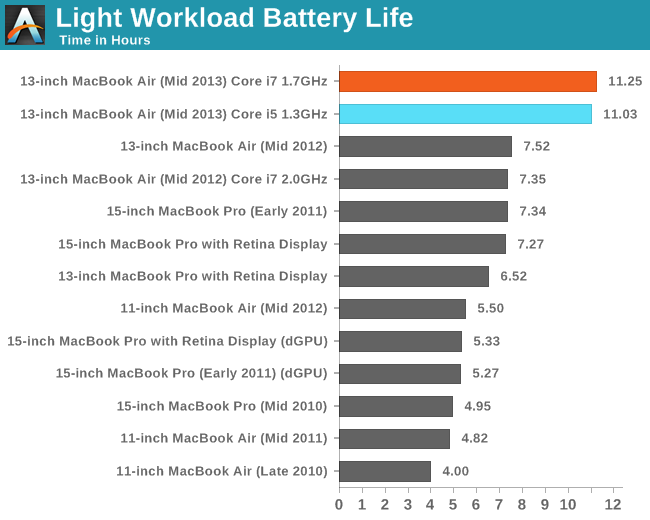 In our mostly idle workload, there's virtually no difference between the two parts in terms of battery life. The i7-4650U is actually able to boast a slightly higher number here but for all intents and purposes the two are equal. Apple's 12 hour estimate comes from a slightly lighter workload than what we run, so I see no reason that Apple couldn't claim equivalent max battery life regardless of what CPU option you pick. 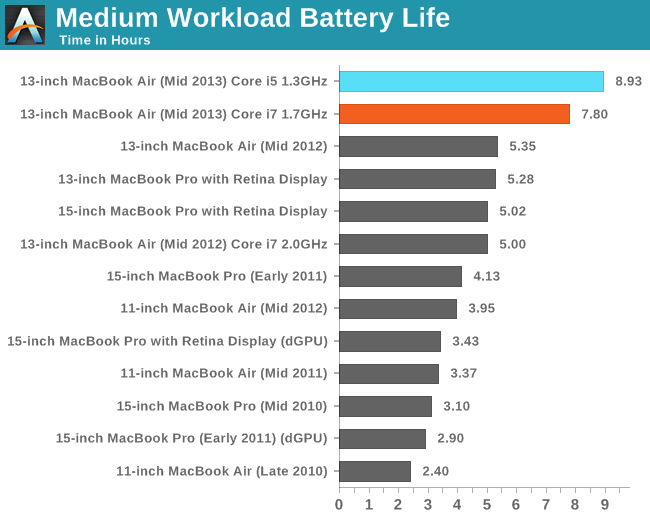 Under load we begin to see the expected: the Core i7 upgrade does have a power cost associated with it. There's around a 13% reduction in battery life here compared to the standard 13-inch MBA configuration. Heavier workloads tend to force the CPU cores into higher frequency (and thus higher voltage) states. In the case of the i7 both the frequency and voltages are higher, which drives power consumption higher than the i5 resulting in lower battery life. 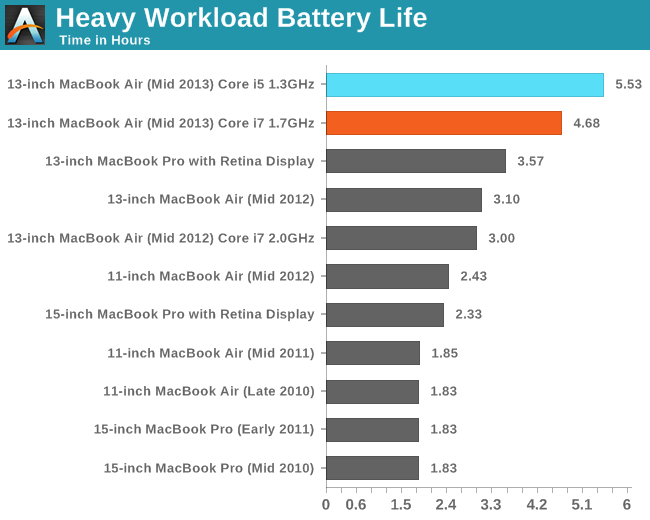 The gap between the i5 and i7 grows to its largest point in our heaviest workload, which makes sense. Here there's around an 18% reduction, or almost a full hour of battery life (52 minutes). If you ran both processors at full tilt nonstop (think looped Cinebench until both batteries die) you'd probably see an even larger gap. In this case I think the differences here are pretty reasonable expectations for most target usage models of the MacBook Air.

As the MacBook Air isn't a handheld tablet, the limit for what's an acceptable max skin temperature is much higher. Just as there's an impact on battery life with the Core i7, there's also an impact on thermals. I ran a CPU and GPU intensive workload and measured thermals at three different points on the system: max temperature on the keyboard side of the system (upper left corner of the keyboard), max temperature on the bottom of the machine as well as the max temp reported by the CPU core proximity thermistor.

Average temperatures aren't substantially higher on the i7, however you will notice that there's a column for max observed temperature on the bottom of the chassis where the upgraded MacBook Air does show a considerably higher temperature. The higher temp isn't sustained but I did record occasional blips up to 46.6 °C on the bottom of the chassis while the i5 model pretty much topped out at its sustained temperature. Internal temps are obviously much higher as well.

The impact on acoustics wasn't really noticeable. Under extended load both systems hit the same 6500 RPM fan speed, which given the same cooling system produced identical acoustic profiles. I tried to see if the i7 would ramp to 6500 RPM any quicker than the i5 but in most cases I don't believe it did, at least appreciably so.