Core i7 vs. Core i5: Understanding the Power Story

Between generations Apple constantly struggles between squeezing every last ounce of max performance out of silicon and reducing system temperatures. I believe Apple's philosophy here is that most of the time your CPU should be running at relatively low utilization and as a result offering the full dynamic range of CPU performance is preferred to clamping max performance in order to preserve lower thermals. The problem is that in some cases, lazy background task management (e.g. keeping too many Safari windows open with Flash active) can drive CPU usage and thermals up even if you're actively doing nothing on the machine. This scenario coupled with Haswell ULT's excellent idle power consumption I believe are primary motivators for Mavericks' App Nap and occluded window slumber features. 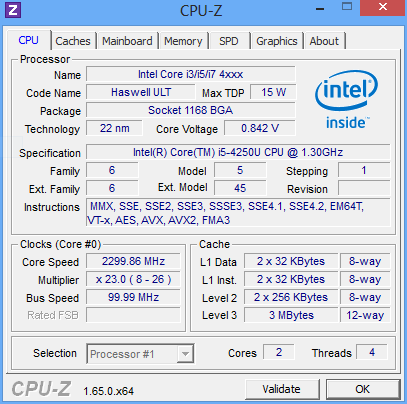 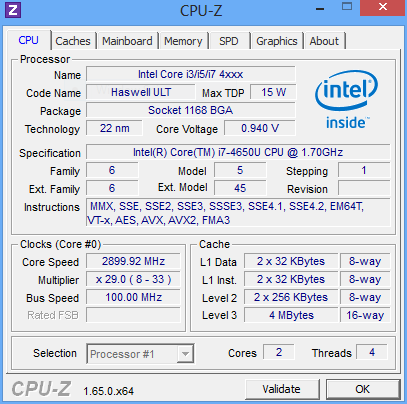 To understand the impact on thermals (and battery life) of the Core i7-4650U on the 13-inch MacBook Air you need to understand what's going on under the hood. To hit higher frequencies, the i7-4650U generally requires a higher voltage. Power consumption (and thus thermal dissipation) can scale linearly with frequency, but it scales quadratically with voltage. The combination of the two is quite possibly the worst case scenario from a power consumption standpoint. This is why it's generally always best to increase performance via process shrinks or architectural enhancements vs. simply scaling frequency. In the case of the i7-4650U we're not talking about huge frequency/voltage scaling here, but rather a tradeoff between added performance and increased power consumption. In the table below I noted typical CPU core voltages for a couple of different operating modes on my i5-4250U and i7-4650U samples. Several years ago Intel introduced voltage binning even at a given frequency, so the voltages you see in the table below are only applicable to my parts (or other similar parts) - you could see a range of acceptable voltages in other binned parts even carrying the same model number. The values in parantheses indicate the CPU frequency (or frequencies) observed during the workload.

There are a bunch of observations here. First off, the two parts are very comparable at idle - this is how Apple can quote all implementations of the MacBook Air as being capable of up to 12 hours of battery life. At idle large parts of the silicon are clock gated if not fully power gated. Idle voltages are extremely low (even compared to what you find in modern smartphones) and both parts run at the same 800MHz frequency at idle, so power consumption is comparable between the two at idle.

Using Cinebench 11.5, I ramped up a FP intensive single threaded workload. FP workloads tend to force a bunch of large units into switching making this a great test for voltage scaling. Here we see that the i5-4250U is capable of hitting its max turbo frequency but for the most part it hangs out around 2.3GHz. The same is true for the i7-4650U, 3.3GHz is possible but most of the time it's sitting down at 2.9GHz. The i7-4650U needs higher voltages all around to hit these higher frequencies.

Next, I cranked up the number of threads. First you'll notice a reduction in clock speeds and voltages. This is where multithreading can actually be good for power consumption. Running more cores at a lower voltage for a shorter period of time can reduce total energy consumed while performing a task. The i5-4250U has no issues running at its max DC turbo frequency (2.3GHz), while the i7-4650U mostly sticks to 2.8GHz with occasional bursts up to 2.9GHz. Note that the 4650U's min voltage at 2.8GHz is actually lower than the 4250U's here. In order to hit these higher frequencies within the same TDP, Intel does have to bin for parts that do a bit better at higher frequencies whereas to make the cut for a 4250U the leakage requirements aren't as severe.

There shouldn't be any surprises thus far, but this data should give us an indication of what we can expect in terms of battery life and thermals. Where the i7 vs i5 comparison becomes tricky is if you look at workloads that can complete quick enough due to the faster performance in order to offset any additional power consumption.