Having taken a quick look at overall system performance, it’s time to get down to the real meat and potatoes of this review and of the Genesis’ existence: gaming.

The Genesis fundamentally exists for two reasons: you’re either playing on a triple monitor 2D/3D surround setup, or you’re playing Crysis 3. There is simply no other scenario where three Titan cards are necessary, as we’ll see. Genesis was meant to play games, and it was meant to do so at the highest resolutions with the highest settings; no compromise gaming at its finest.

To illustrate this point, we’ve run our Genesis system with 1, 2, and 3 Titan cards enabled to look at not only what its shipping performance is, but what scaling is like from 1 GPU to multiple GPUs. As we’ve discussed before, using multiple GPUs is not a foolproof way to improve performance due to the inherent limitations of AFR, but when we’re up to a single Titan card this is the only way to further improve performance.

We’re also throwing in numbers from our GPU testbed, where available. Since we can’t control for the differences in the testbed (not the least the cooling differences) we can’t hold the two of them equal. But we can at least showcase the difference between our testbed and the Genesis due to configuration, cooling, and CPU differences. 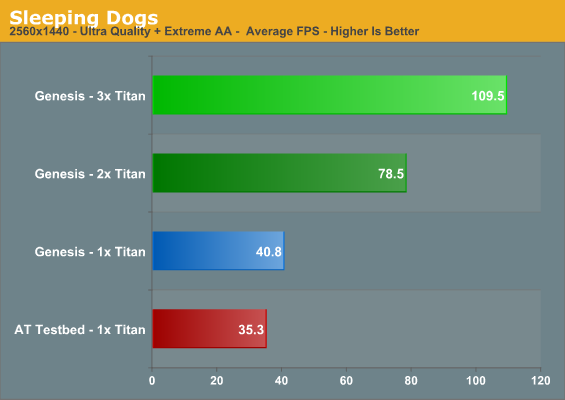 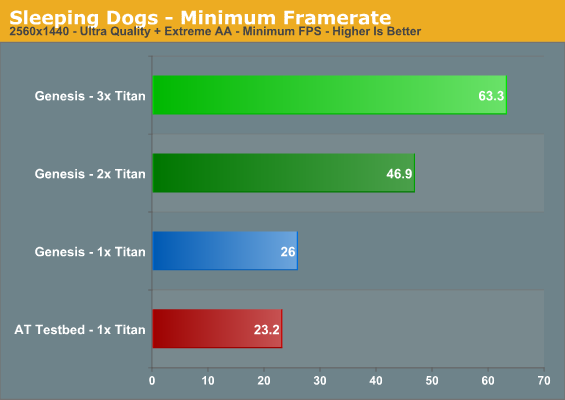 Sleeping Dogs’ benchmark doesn’t work correctly at 5760, so we’re stuck looking at 2560x1440 here. But even so it presents an interesting case study since Sleeping Dogs’ highest settings involve super-sample anti-aliasing nearly the entire screen, a performance-brutal but very effective method of eliminating jaggies. 1 Titan can’t do the job here while keeping average framerates above 60, so 2 are necessary. But to keep the minimum framerates above 60fps becomes a task for no less than 3 Titans.

Scaling ends up being very good here. 1 to 2 Titans is a 92% increase in performance. Meanwhile 2 to 3 Titans is not as great at 39% (out of 50%), but there’s also a very real possibility we’re hitting CPU limits here. As we’ll see, tri-SLI Titans can be very hard to feed even with a 4.9GHz SNB-E processor. 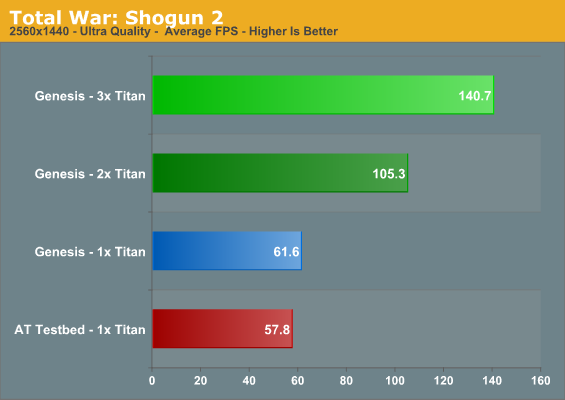 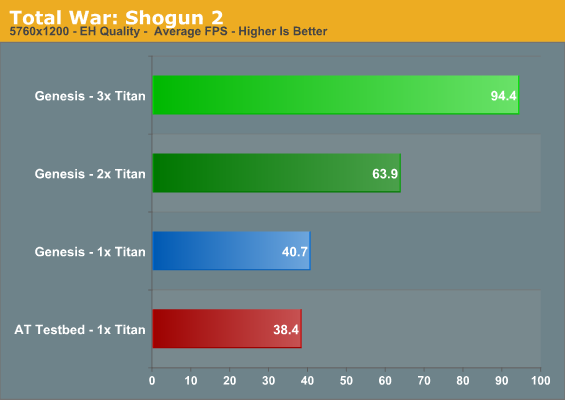 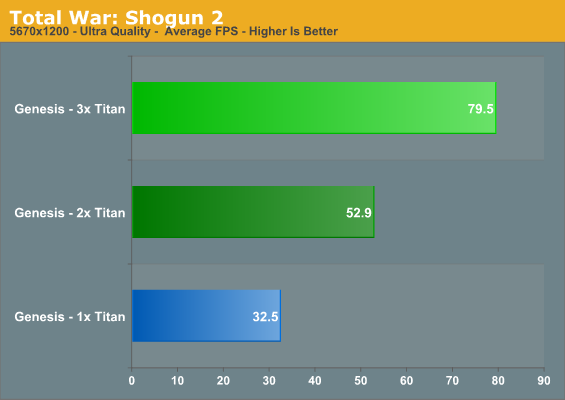 Total War 2 also scales up well with multiple Titans, though as a turn based strategy game there isn’t the same need for incredible performance here as there is with our action games. At 2560 even 1 Titan is more than enough, and at 5760 with absolutely everything cranked up, 1 Titan is still above 30fps. Still, you technically need 3 Titans to get ahead of 60fps. Oddly enough, at times the gains from a 3rd Titan are closer to the theoretical gains we’d expect than adding the 2nd Titan. 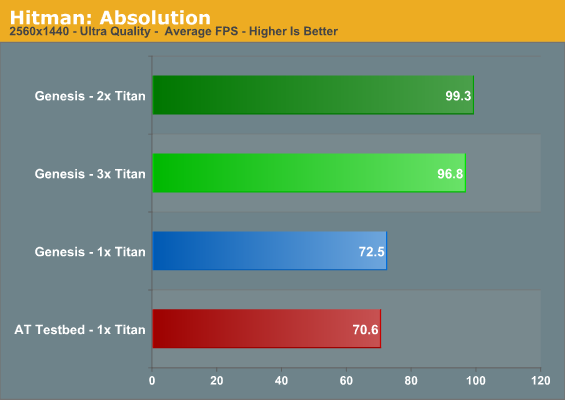 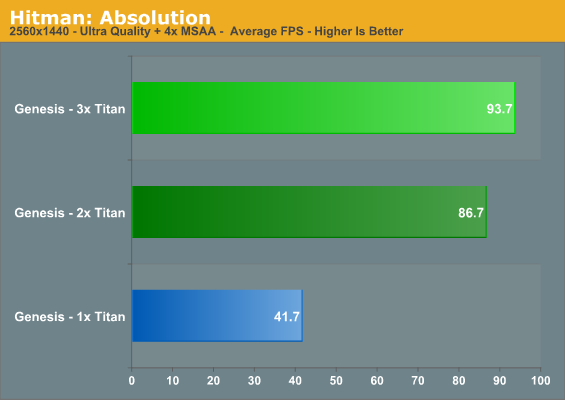 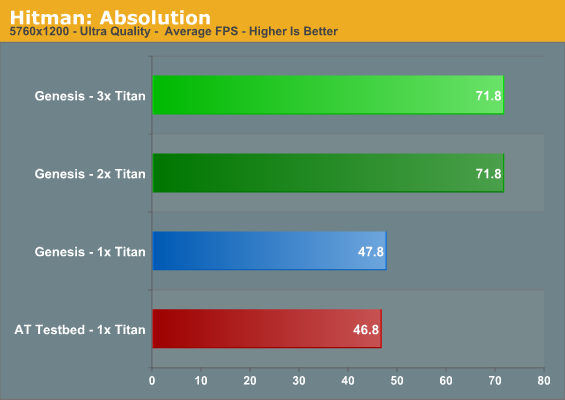 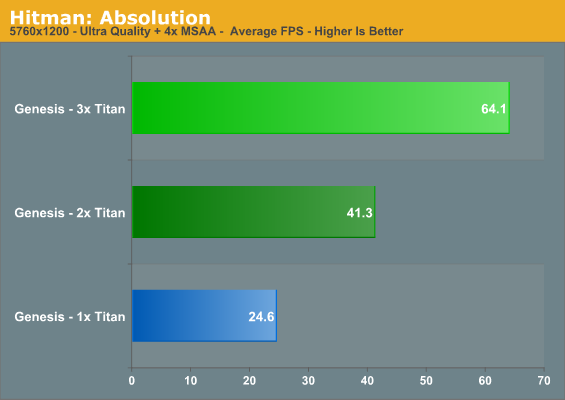 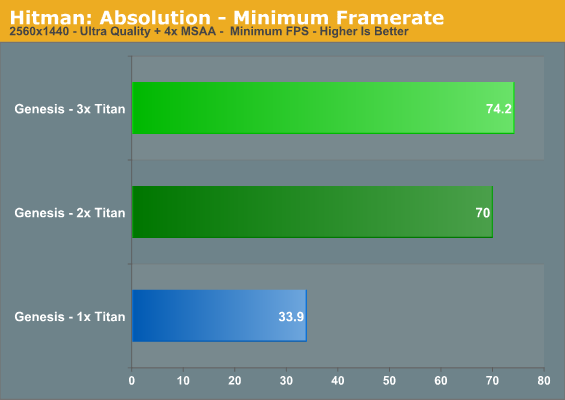 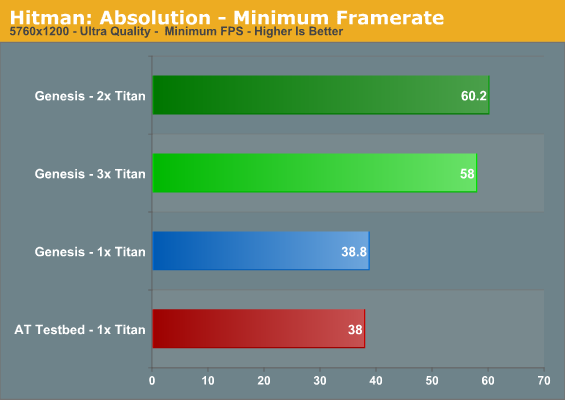 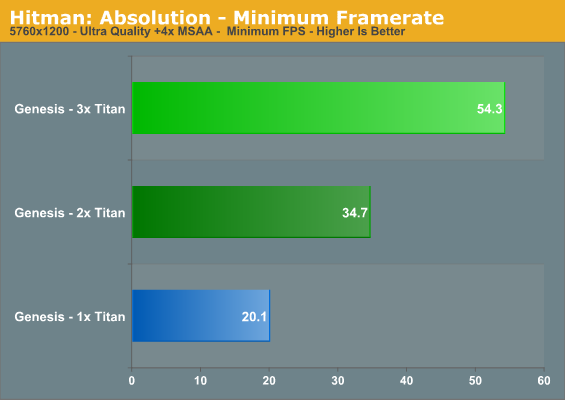 Hitman is our first good example of being CPU limited, which is a big problem any kind of multiple-Titan computer faces, including the Genesis. Thanks to the embarrassingly parallel nature of graphics rendering, the GPU side of the equation gets faster at a much greater rate than the CPUs feeding those GPUs, so it’s easy to get CPU bottlenecked, and even easier when dealing with multiple GPUs. Our in-game experience isn’t quite the CPU limited for the most part, but especially at lower resolutions the performance it’s hard to feed multiple Titans.

Overall anything short of 5760 with 4x MSAA fails to make a 3rd Titan worthwhile. On the other hand, you do need at least 2 Titans to handle MSAA even at 2560, with the 3rd making itself felt at 5760. So there is a use for 3 Titans even in a more CPU limited scenario, but it will require the highest resolutions with anti-aliasing, reinforcing the fact that the Genesis’ capabilities are best suited to driving a surround setup.