HP's Moonshot 1500: Our Evalution So Far

We have not tested it yet, but we have no doubts that HP's Moonshot 1500 is a great chassis. The server nodes get power and access to 3 different fabrics from a very advanced backplane, and share power, cooling and management. HP brings some of the best ideas of the blade and the microserver world together. Network and server management gets a lot simpler this way. 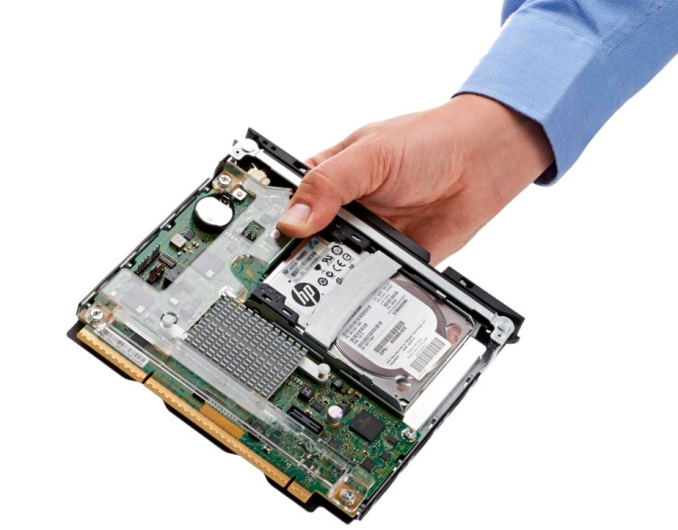 But the server cartridge is a whole different story. The inclusion of the local harddisk is the ideal recipe for increasing management costs quickly. Replacing a bad harddisk - still the most common failure inside the server rack - involves pulling out an extremely heavy server as far as you can, removing the access panel, removing a server cartridge and lastly replacing the harddisk. That is a long and costly procedure compared to simply pushing the release button of hotpluggable harddisks, which can be found in the front of most servers, including the Boston Viridis.

Secondly, the performance per Watt is fantastic... if you compare it with old 1U servers. Consuming 850 Watt for 180 slow threads, or 5W per thread is nothing to write home about. A modern low power blade or a design like Supermicro's Twin² or even HP's own SL series can offer 32 Xeon E5 threads for about 200 W. That is 6.25 Watt per "real Xeon" thread, which is, even in very low IPC workloads, at least 3 times faster!  Want even more proof that 5W for a wimpy thread is nothing special? SeaMicro claims 3.2 kW for a complete system with harddisks, memory and 512 Opteron Piledriver cores. That is 6.25W per real heavy duty core!

Of course, those calculations are based upon paper specs. But we tested Calxeda's technology first hand, and the Boston Viridis with Calxeda went as low as 8.33W for 4 threads, or a little bit more than 2W per thread. Granted, that is without storage but even if you add a 4W 2.5 inch harddisk, we get 3W per thread!

Still not convinced? Well, Intel's own benchmarks are pretty spicy to say the least. This slide can be found in the S1200 presentation:

Again, a relatively simple Atom S1260 server node needs about 20 W. But notice how little power the Xeon E3 needs. Even with 2 SSDs, 16 (!)GB of RAM, 10 Gigabit Ethernet, you are looking at 60W for 8 fast threads. Make the two systems similar (the 10 Gb PHY consume easily 5-8W more than the 1 Gb) and you get about 6 W for the Xeon thread and 5 W for the Atom thread.

Let us cut to the chase: the current Atom has a pretty bad performance/watt ratio. And the way the HP server cartridges are built today does not make it better. Compare the mini-blade approach with the EnergyCard approach of Calxeda or the "credit card servers" of SeaMicro and you'll understand that there are better and more innovative ways to design microservers.

To sum it all up, the HP Moonshot is a good platform. But both SeaMicro and Calxeda already offer better designed server nodes. And there are much better CPUs on the market for microservers: AMD's lowest power Piledrivers, Calxeda A9 based EnergyCore and Intel's own Xeon E3-1265L offer a massively better performance/watt ratio. No matter what the software stack is, no matter what the most important metric is for you, one of those three will be able to beat the S1260. The Xeon offers the best single threaded integer performance, the Opteron can offer the best floating point performance (for HPC apps that can be recompiled) and if performance does not matter, the ARM based Calxeda EnergyCard sips much less power than the Atom.

Sure, the Atom S1200 can run on top of (64 bit) Windows Server and ESXi, something that is not possible now with the ARM based Calxeda EneryCore.  But Windows server is seldomly seen in the hyperscale servers and so is ESXi. ESXi is a lot more popular in the hosting market, but let us not forget that VT-x is not enough to run ESXi smoothly. We have been accustomed to very low virtualization overhead thanks to the fact that the CPU architects have reduced the VMexit and entry latencies and introduced technologies like Extended Page Tables combine with very large TLBs. Those vast improvements for virtualization performance have not been implemented in the Atom. Running ESXi on top of the S1260 with 8GB of RAM might not be a very pleasant experience..

To sum it up, we are not exactly thrilled with HP's CPU choices. Luckily, Calxeda is one of the prime partners of HP's Moonshot Project. Lastly, this platform will be outdated soon.