As we briefly mentioned at the beginning of this article, the GeForce GTX Titan takes a large number of cues from the GTX 690. Chief among these is that it’s a luxury card, and as such is built to similar standards as the GTX 690. Consequently, like the GTX 690, Titan is essentially in a league of its own when it comes to build quality.

Much like the GTX 690 was to the GTX 590, Titan is an evolution of the cooler found on the GTX 580. This means we’re looking at a card roughly 10.5” in length using a double-wide cooler. The basis of Titan’s cooler is a radial fan (blower) sitting towards the back of the card, with the GPU, RAM, and most of the power regulation circuitry in front of the fan. As a result the bulk of the hot air generated by Titan is blown forwards and out of the card. However it’s worth noting that unlike most other blowers technically the back side isn’t sealed, and while there is relatively little circuitry behind the fan, it would be incorrect to state that the card is fully exhausting. With that said, leaving the back side of the card open seems to be more about noise and aesthetics than it does heat management. 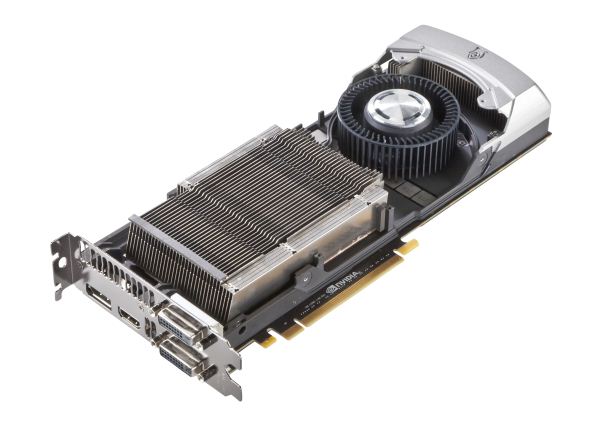 Like the GTX 580 but unlike the GTX 680, heat transfer is provided by a nickel tipped aluminum heatsink attached to the GPU via a vapor chamber. We typically only see vapor chambers on premium cards due to their greater costs, but also when space is at a premium. Meanwhile NVIDIA seems to be pushing the limits of heatsink size here, with the fins on Titan’s heatsink actually running beyond the base of the vapor chamber. Meanwhile providing the thermal interface between the GPU itself and the vapor chamber is a silk screened application of a high-end Shin-Etsu thermal compound; NVIDIA claims this compound offers over twice the performance of GTX 680’s grease, although of all of NVIDIA’s claims this is the least possible to validate.

Moving on, catching what the vapor chamber doesn’t cover is an aluminum baseplate that runs along the card, not only providing structural rigidity but also providing cooling for the VRMs and for the RAM on the front side of the card. Baseplates aren’t anything new for NVIDIA, but again this is something that we don’t see a lot of except on their more premium cards.

Capping off Titan we have its most visible luxury aspects. Like the GTX 690 before it, NVIDIA has replaced virtually every bit of plastic with metal for aesthetic/perceptual purposes. This time the entire shroud and fan housing is composed of casted aluminum, which NVIDIA tells us is easier to cast than the previous mix of aluminum and magnesium that the GTX 690 used. Meanwhile the polycarbonate window makes its return allowing you to see Titan’s heatsink solely for the sake of it.

As for the back side of the card, keeping with most of NVIDIA’s cards Titan runs with a bare back. The GDDR5 RAM chips don’t require any kind of additional cooling, and a metal backplate while making for a great feeling card, occupies precious space that would otherwise impede cooling in tight spaces.

Meanwhile for RAM it should come as no particular surprise that NVIDIA is once more using 6GHz RAM here. Specifically, NVIDIA is using 24 6GHz Samsung 2Gb modules here, totaling up to the 6GB of RAM we see on the card. 12 modules are on front with the other 12 modules on the rear. The overclocking headroom on 6GHz RAM seems to vary from chip to chip, so while Titan should have some memory overclocking headroom it’s hard to say just what the combination of luck and the wider 384bit memory bus will do.

Providing power for all of this is a pair of PCIe power sockets, a 6pin and an 8pin, for a combined total of 300W of capacity. With Titan only having a TDP of 250W in the first place, this leaves quite a bit of headroom before ever needing to run outside of the PCIe specification.

At the other end of Titan we can see that NVIDIA has once again gone back to their “standard” port configuration for the GeForce 600 series: two DL-DVI ports, one HDMI port, and one full-size DisplayPort. Like the rest of the 600 family, Titan can drive up to four displays so this configuration is a good match. Though I would still like to see two mini-DisplayPorts in the place of the full size DisplayPort, in order to tap the greater functionality DisplayPort offers though its port conversion mechanisms.