To measure the integer processing potential of the various CPUs, we'll turn to several different workloads. First up, we have 7z LZMA compression and decompression, again looking at performance with one to four threads. On the next page, we'll look at gcc compiler performance.

Compression is a low IPC workload that's sensitive to memory parallelism and latency. The instruction mix is a bit different, but this kind of workload is still somewhat similar to many server workloads. 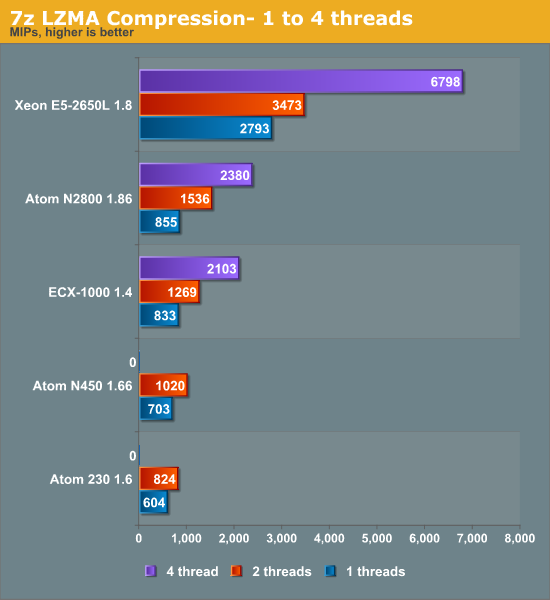 Clock for clock, the out-of-order Cortex-A9 inside the Calxeda EXC-1000 beats the in-order Atom core. A single Cortex-A9 has no trouble beating the older Atoms while likewise coming close to the much higher clocked N2800. The N2800 and ECX-1000 perform similarly.

Decompression is pretty branch intensive and depends on the latencies of multiply and shift instructions. 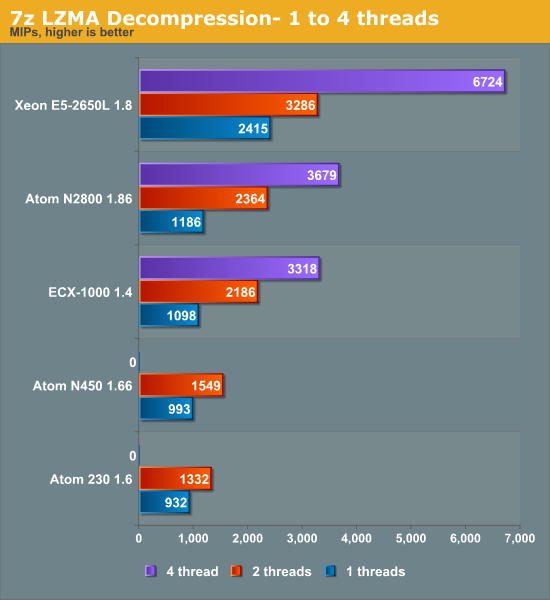 Looking at both decompression and compression, it looks like a quad ARM Cortex-A9 is about as fast as one Xeon core (without Hyper-Threading) at the same clock. We need about six Cortex-A9 cores to match the Xeon core with Hyper-Threading enabled. The quad-core ECX-1000 1.4GHz is also close to the dual-core, four-threaded Atom at 1.86GHz. This bodes well for Calxeda as the 6.1W S1240 only runs at 1.6GHz.