The final unknown in all of this is power consumption. ARM's Cortex A15 isn't really supposed to be a sipper of power, and when placed in a notebook I don't know that there's a lot we can conclude about how it stacks up to Atom either. Some high level power consumption data would normally help but these two platforms are fairly different:

The new Chromebook consumes considerably less power at idle than its predecessor. The smaller display, simplified motherboard and truly integrated SoC platform are likely all to thank for this. The significant reduction in power also helps explain the big reduction in battery capacity as well.

Under load, the two platforms do see differing levels of additional power consumption. The new Exynos 5 based Chromebook sees a dramatic increase in power consumption under load, hitting 10.5W (a 66% increase over idle) while running Mozilla's Kraken benchmark. The Atom N570 based Chromebook increases power consumption as well, but just not by as significant a degree: ~25%. This actually helps illustrate exactly why Atom wasn't phone worthy in its earlier incarnations. Contrary to popular belief, it wasn't actually peak power consumption that was the problem (a move to 32nm can easily eat into these numbers). The total platform power consumption, particularly at idle, was Atom's real problem in the early days. It also turns out that this is much of what keeps Intel's Core processors from moving into ultra mobile form factors, something that Haswell is supposed to address.

Given that we're dealing with somewhat different panels here, I wanted to see what power consumption looked like if we removed the panels from the equations. I re-ran all of the power data with the display turned off:

The old Atom based Chromebook uses more than twice the idle power of the new version - it's no wonder Google was able to get away with a battery half the size. Once again however we see a much larger increase in power consumption once the Cortex A15 is under heavy load. Active power consumption more than doubles on the new Chromebook, while we see around a 30% increase on the Atom based system. I do wonder what will have to be done to get the Exynos 5 Dual into a smartphone as an increase of ~4W under load just won't cut it in a phone. The Atom platform shows a 2.6W increase in power under load, which sounds about right for a high clocked 45nm part. 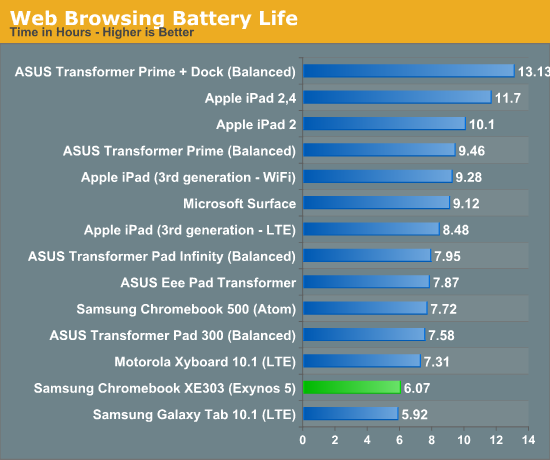 Despite the more power efficient platform, the reduction in battery capacity puts the new Chromebook well below the Atom model in battery life. Our wireless web browsing test put the new Chromebook at just over 6 hours of continuous use on a single charge. For a notebook that's not too bad, but compared to modern tablets it's not good. 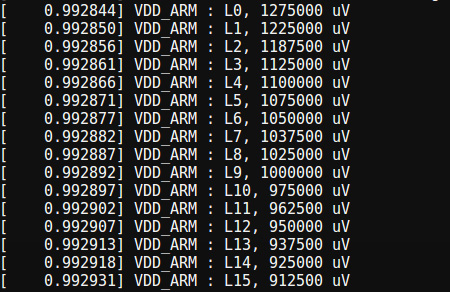 The performance gains over Atom (and by extension, the ARM Cortex A9) do give us some indication as to what could be done to get Exynos 5 into a smartphone. By dropping clocks much lower than 1.7GHz Samsung would be able to maintain a performance advantage in a very power constrained device and hopefully keep power in check. The photo above features a list of all of the voltage levels supported by Samsung's Exynos 5 Dual as implemented in the new Chromebook.