Performance: Atom vs. ARM's Cortex A15

In our iPhone 5 review I included this crude diagram comparing the high level micro-architecture layouts of the current crop of mobile CPU cores. While most of the cores looked fairly similar, the one to really stand out is ARM's Cortex A15. A three issue, OoO core, the Cortex A15 was designed to put ARM in a completely new performance category. 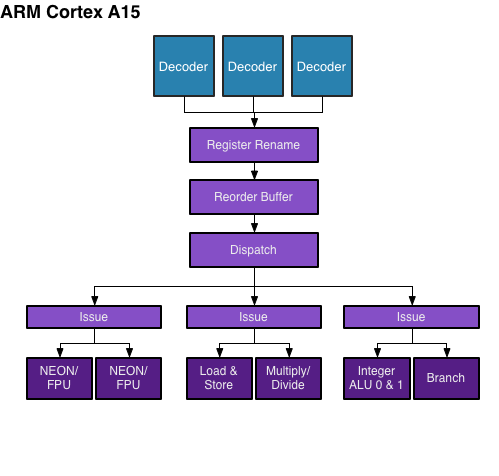 For 2013, the Cortex A15 is expected to be the ARM CPU core of choice for the next wave of smartphone and tablet SoCs. NVIDIA's Wayne should integrate multiple Cortex A15s as well as competing solutions from Samsung and TI. Samsung's Exynos 5 Dual, found in the new Chromebook, integrates two ARM Cortex A15 cores running at 1.7GHz. As our first experience with a Cortex A15, I wanted to get a good idea for how it would compare to Intel's Atom. And now me comparing to the older Chromebook 500 makes sense. The Atom N570 in the older Chromebook is the closest approximation we have to the currently shipping Atom based mobile SoCs. There are a number of enhancements to the newer chips (particularly when it comes to power consumption), but the base core is very similar. It's clear that the Sandy Bridge Celeron based Chromebook is faster than this new Cortex A15 design, but how about the old dual-core Atom model?

As Chrome OS is built around the Chrome browser, our tests had to be largely JavaScript based unfortunately. The good news is that even given the nature of the benchmarks, we're able to get a good feel for performance between the two SoC platforms. Both systems were running the latest version of Chrome OS at the time of publishing.

The Cortex A15 is fast. Across the board we're seeing a 40 - 65% increase in performance over a dual-core Atom. Although it's not clear how performance will be impacted as companies work to stick Cortex A15 based SoCs in smartphones with tighter power/thermal budgets, in notebooks (and perhaps even tablets) the Cortex A15 looks capable of delivering a good 1 - 2 generation boost over Intel's original Atom core.

The IE10 browser tests tend to agree with our JavaScript performance tests, although the CSS Maze Solver benchmark shows a huge advantage for ARM over Intel's Atom here.

GPU performance is an even bigger advantage for the Exynos 5 Dual over Intel's old Atom N570 (GMA-3150 GPU). I ran three different webGL tests, each of which showed just how bad the old Atom GPU core was. 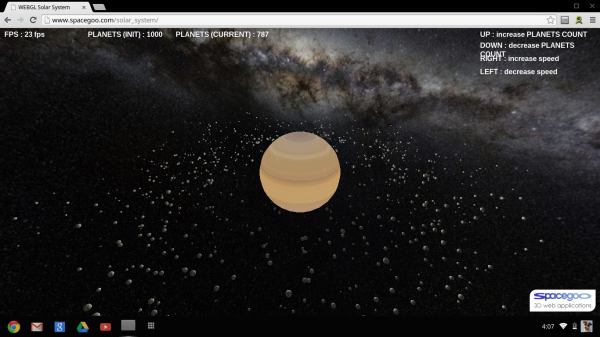 This comparison isn't really all that fair as the newer Atom cores use Imagination GPUs, although even then they are using relatively underpowered solutions compared to what Samsung is shipping on the Exynos 5 Dual.

The more relevant conclusions here apply to the CPU comparison. Next year Intel is expected to introduce its first new Atom core since the platform's introduction five years ago. The new architecture will bring an Out of Order execution core as well as a tangible performance increase. The question is whether or not this will be enough to fend off advances from Cortex A15 based designs.

In our Surface review I looked at Clovertrail Windows 8 tablet performance and put it a good 40%+ faster than NVIDIA's Tegra 3. If ARM's Cortex A15 is able to outperform Clovertrail by a similar margin, it could make the next generation of Windows RT tablets even more attractive. Keep in mind that we're looking at an older Atom platform here and not Clovertrail, so the performance deltas could shrink a bit.