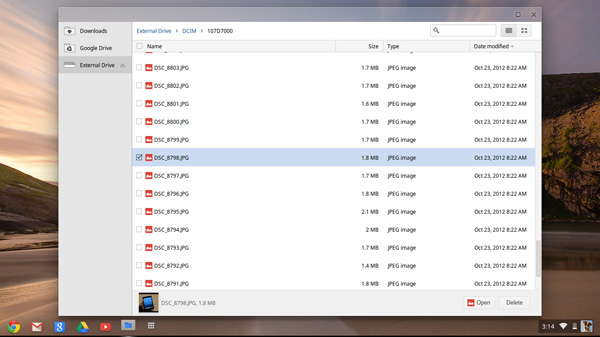 Chromebooks have never been all that robust when it comes to user experience. When Google first announced them they didn't even support mounting USB storage, although that has since been rectified. Although Google may have grand visions for where Chrome OS could go, today it serves one real purpose: to provide an affordable platform for a good web experience free of viruses and malware. To that end, the new Chromebook accomplishes its goal fairly well - as did the devices that came before it.

Chrome tends to be my favorite browser, and the experience maps fairly well the Chromebook platform. Web pages render properly and quickly (given the hardware that is). Compatibility isn't an issue. Everything just seems to work.

Obviously a major selling point of Chrome OS is that the web now allows for many content rich applications to be delivered directly in the browser rather than through a standalone executable. Google helps give access to these applications through the Chrome Web Store, although it's important to note that not all of them will run on the ARM based Chromebook (nor is there a good listing of those that will/won't run). The apps themselves vary in type from simple games to productivity tools. Many are quite functional, but the performance just isn't very good compared to a $500 tablet or even a $500 PC. 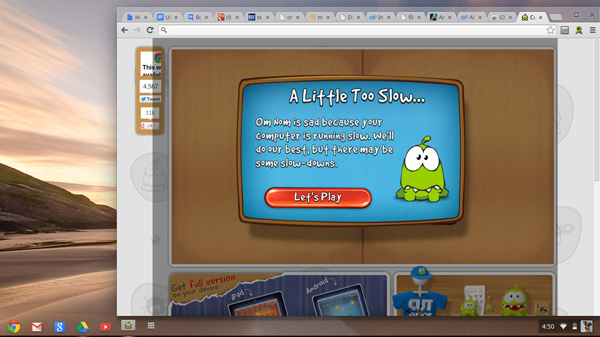 Technically the Chromebook can do a lot, but for anything other than browsing, YouTube and Google docs use I wouldn't get my hopes up. The heavier apps just don't run smoothly on the platform. Even web browsing isn't what I'd consider fast, but it's still acceptable. To put things in perspective, I got a performance warning trying to play Cut the Rope on the new Chromebook. Stability can also be a problem. Try to deviate too much from normal web browsing and you'll be greeted with long pauses and even system locks. For example, while testing WebGL performance on the new Chromebook I had to power cycle the machine after the browser became unresponsive. Normal web browsing is fine though.

There are other annoyances that aren't strictly performance related. For example, Netflix streaming won't work on the new Chromebook. Although image browsing support is native to the OS, there's no support for RAW camera files from a DSLR.

For the basic necessities however, the Chromebook does embody the fast enough computing concept. I researched, wrote and did almost all of my work while preparing this review on the Chromebook and generally found the experience acceptable. Other features like Pandora worked just fine (although I'd occasionally get hiccups in music playback if I loaded a particularly complex page). Whenever I'd switch back to my Ivy Bridge notebook I'd really appreciate the extra speed, but for writing and web browsing duties the Chromebook got the job done. Had Chrome OS been built around a lesser browser I don't think I would be as positive about the experience.