Alongside OpenGL ES 3.0, desktop OpenGL is also being iterated upon today with the launch of OpenGL 4.3. Unlike OpenGL ES this is only a much smaller point update. This is not to say that it’s unimportant, but it will bring a smaller list of new features to the table.

At the same time though, this also marks what may potentially be an interesting inflection point for OpenGL gaming on the desktop. On Windows OpenGL usage has never been lower; the only AAA game engine still based on OpenGL is id Tech 5, which with the termination of licensing by id is only used internally. Khronos of course would like to change that, so when Valve Software says that they’re going to be porting Source over to Linux (thereby increasing the audience for OpenGL games) it’s of quite some interest to Khronos. At the same time desktop OpenGL still has a long way to go to recapture its glory days in the late 90’s and early 2000’s, so Khronos is doing what they can to spur that on.

Because OpenGL ES 3.0 is largely taken from desktop OpenGL in the first place, there aren’t a ton of changes due to this. But there is one: texture compression. The aforementioned standardization around ETC applies to both OpenGL ES and OpenGL, which means that starting with OpenGL 4.3, desktop OpenGL will have a standard texture compression format. 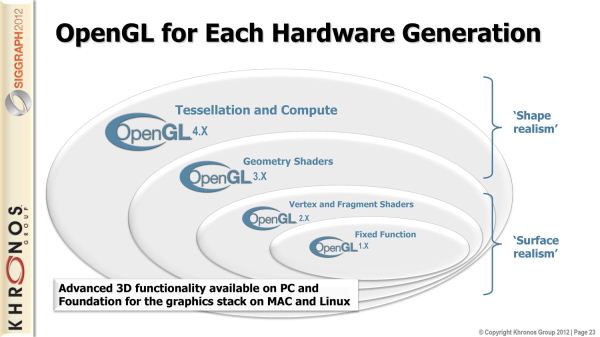 Practically speaking, this won’t make a huge difference to desktop developers right now. Because S3TC is a required part of the Direct3D specification and all desktop GPUs support Direct3D, S3TC has been a de-facto OpenGL standard for nearly 10 years now. And because few developers will target OpenGL 4.3 right away, that won’t change. But this means that developers targeting 4.3 do finally have a choice in texture compression, and developers doing cross-platform development with OpenGL ES can use the same texture compression format in both cases.

It’s worth noting though that just because a GPU “supports” ETC doesn’t mean it has hardware support. NVIDIA has told us that they’ll be 4.3 compliant, but they’re handling ETC by decompressing the texture in their drivers before sending it over to the GPU in an uncompressed format, and while AMD wasn’t able to get back to us in time it’s almost certainly the same story over there. For ports of OpenGL ES games this isn’t going to be a problem (dGPUs have plenty of high-bandwidth memory), but it means S3TC will remain the de-facto standard desktop OpenGL texture compression format for now.

Moving on, while OpenGL ES 3.0 compatibility is a big deal for OpenGL, it’s actually not the biggest feature addition for OpenGL 4.3. For that we turn to compute shaders.

As a bit of background, when meaningful compute functionality was introduced for GPUs, Microsoft and Khronos went in two separate directions. Khronos of course created OpenCL, a full-featured ANSI C based API for compute. Microsoft on the other hand introduced compute shaders, which was a special class of HLSL designed for compute. OpenCL is far more flexible, but flexibility has its price. Specifically, implementing compute functionality in OpenGL games often wasn’t as easy as the equivalent functionality using a Direct3D compute shader, and the overhead of OpenCL limited performance.

The end result is that Khronos has decided to implement compute shaders in OpenGL in order to bridge this gap. OpenCL of course remains as Khronos’s premiere compute API for both stand-alone compute applications and OpenGL games/applications that need the full flexibility, for but games that don’t need that level of flexibility and only want to run compute work on a GPU there is now another option. 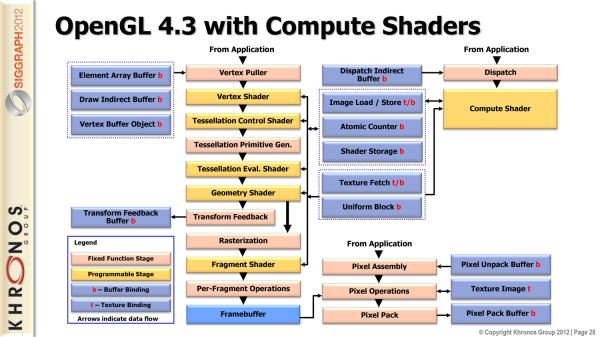 Moving on, OpenGL 4.3 will also be introducing some new texture and buffer features. On the texture side of things, one new feature will be texture views, which allow for a texture to be “viewed” in a different way by interpreting its results in a different manner, all without needing to duplicate the texture for modification. As for buffers, 4.3 introduces support for reading and writing to very large buffers across all shader types and all stages. The idea behind this is that it’s an efficient way for those new compute shaders to communicate with the graphics pipeline, given the large amount of data that can be in flight with a compute shader.

Wrapping things up, for some time now Khronos has been working on bringing OpenGL into alignment with Direct3D in order to close the feature and developer gap that has been created between the two. As Khronos correctly notes, with the addition of compute shader functionality OpenGL is now a true superset of Direct3D. If desktop OpenGL is going to see a resurgence in the next few years, it’s now in a far better position to pull that off than it was in before.