As we’ve noted in our rundowns of OpenGL and OpenGL ES, the inclusion of ETC texture compression support as part of the core OpenGL standards has finally given OpenGL a standard texture compression format after a number of years. At the same time however, the ETC format itself is approaching several years old, and not unlike S3TC it’s only designed for a limited number of cases. So while Khronos has ETC right now, in the future they want better texture compression and are now taking the first steps to make that happen.

As the winning proposal in that search, if all goes according to plan ASTC will eventually become OpenGL and OpenGL ES’s mandatory next generation texture compression algorithm. In the meantime Khronos is introducing it as an optional feature of OpenGL ES 3.0 and OpenGL 4.3 in order to solicit feedback from hardware and software developers. Only once all parties are satisfied with ASTC to the point that it’s ready to be implemented into hardware can it meaningfully be moved into the core OpenGL specifications. 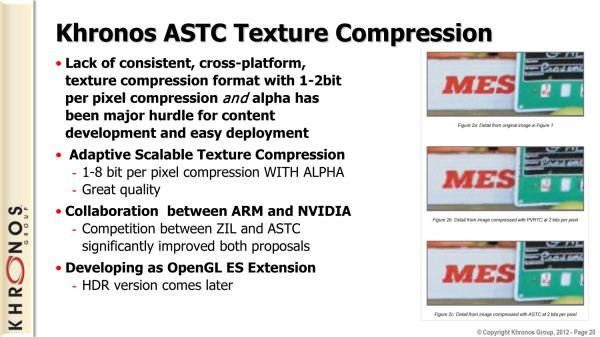 So what makes ASTC next-generation anyhow? Since the introduction of S3TC in the 90s, various parties have been attempting to improve on texture compression with limited results. In the Direct3D world where S3TC is standard, we’ve seen Microsoft add specialized formats for normal maps and other texture types that are not color maps, but only relatively recently did they add another color map compression method with BC7. BC7 in turn is a high quality but lower compression ratio algorithm that solves the gradient issues S3TC faces, but for a 24bit RGB texture it’s only a 3:1 compression ratio versus 6:1 for S3TC (32bit RGBA fares better; both are 4:1). 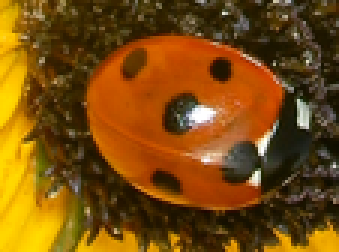 Meanwhile in the mobile space we’ve seen the industry’s respective GPU manufacturers create their own texture compression formats to get around the fact that S3TC is not royalty free (and as such can’t be included in OpenGL). And while Imagination Technologies in particular has an interesting method in PVRTC that unlike the other formats is not block based – and thereby can offer a 2bpp (16:1) compression ratio – it has its own pros and cons. Then of course there’s the matter trying to convince holders of these compression methods to freely license them for inclusion in OpenGL, when S3/VIA has over the years made a tidy profit off of S3TC’s inclusion in Direct3D.

The end result is that the industry is ripe for a royalty free next generation texture compression format, and ARM + NVIDIA intend to deliver on that with the backing of Khronos.

As you can imagine, Khronos is rather excited about the potential for ASTC. With their strong position in the mobile graphics space they need to provide paths to improving mobile graphics quality and performance amidst the reality of Moore’s Law and the other realities of SoC manufacturing. Specifically, mobile GPU bandwidth isn’t expected to grow by leaps and bounds like shading performance, meaning Khronos and its members need to do more with what amounts to less memory bandwidth. For Khronos texture compression is key, as ASTC will allow developers to pack in smaller textures and/or improve their texture quality without using larger textures, thereby making the most of the limited memory bandwidth available.

Of course the desktop world also stands to benefit. ARM’s objective PSNR data for ASTC has it performing far better than S3TC at the same compression ratio, which would bring higher quality texture compression to the desktop at the same texture size. And since ASTC is being developed by Khronos members and released royalty free, at this point there’s no reason to believe that Direct3D couldn’t adopt it in the future, especially since all major Direct3D GPUs also support OpenGL in the first place, so the requisite hardware would already be in place.

With all of that said, there’s still quite a bit of a distance to go between where ASTC is at today and where Khronos would like it to end up. For the time being ASTC needs to prove itself as an optional extension, so that GPU vendors are willing to implement it in hardware. It’s only after it becomes a hardware feature that ASTC can be widely adopted by developers.