In conjunction with next-generation GPUs, OpenGL ES 3.0 will make a number of new features available to mobile and embedded devices. In terms of functionality, OpenGL ES 3.0 is largely a mobile implementation of the OpenGL 3.3 feature set, with a couple notable features missing and a few additional features plucked from later revisions of OpenGL. In terms of backwards compatibility only OpenGL 4.3 is a complete superset of OpenGL ES 3.0, but for most purposes OpenGL 3.1 is probably the closest desktop OpenGL specification.

On that note, though drawing a comparison to Direct3D isn’t particularly straightforward, since we get asked about it so much we’ll try to answer it. Direct3D of course had a major reachitecting with Direct3D 10 back in 2007, which added a number of features to the API  while giving Microsoft a chance to clean out a great deal of fixed-function legacy cruft. From a major feature perspective OpenGL did not reach parity with Direct3D 10 until OpenGL 3.2, which among other things introduced geometry shader support.

OpenGL ES 3.0 also adds support for Uniform Buffer Objects, which is a useful and efficient data buffer type for use with shaders.

As is common with most OpenGL releases, OpenGL ES 3.0 includes a new version of the GL ES Shading Langauge, used to program shader effects. The primary addition for GLSL ES 3.0 is full support for 32bit integer and 32bit floating point (i.e. full precision) data types and operations.  Previously only lower precisions were supported, which are easier to compute (it takes less hardware and less memory), but as shader complexity increases the relatively large precision errors become even larger.

GLSL ES 3.0 has also seen some syntax and feature tweaks to make it more like desktop OpenGL. This doesn’t change the fact that only OpenGL 4.3 is a complete superset of OpenGL ES 3.0, but it makes it easier for developers used to desktop GLSL to work on GLSL ES and vice versa.

While OpenGL ES 3.0 doesn’t get geometry shaders, it does get several features to help with geometry in general. Chief among these are the addition of occlusion queries and geometry instancing. Occlusion queries allows for fast hardware testing of whether an object’s pixels are blocking (occluding) another object, which is helpful for quickly figuring out whether something can be skipped because it’s occluded. Meanwhile geometry instancing allows the hardware to draw the same object multiple times while only requiring the complete object to be submitted to the rendering pipeline once. This makes trees and other common objects easier for the CPU to set up as it doesn’t need to keep resubmitting the entire object in different locations.

OpenGL ES 3.0 adds support for a number of texture features; in fact it’s far too many to break down. The big additions are support for floating point textures (to go with the aforementioned FP32 support), 3D textures, depth textures, non-power-of-two textures, and 1 & 2 channel textures (R & R/G).

Multiple Render Target support allows the GPU to render to multiple textures at once. Simply put, the significance of this feature is that it’s necessary for practical real-time deferred rendering.

Because there isn’t a standard texture compression format in OpenGL ES 2.0, developers have to pack their textures multiple times for different hardware, which takes up time and more importantly space. This is a particular problem for Android developers since the platform supports multiple GPUs (versus the PowerVR-only iOS). 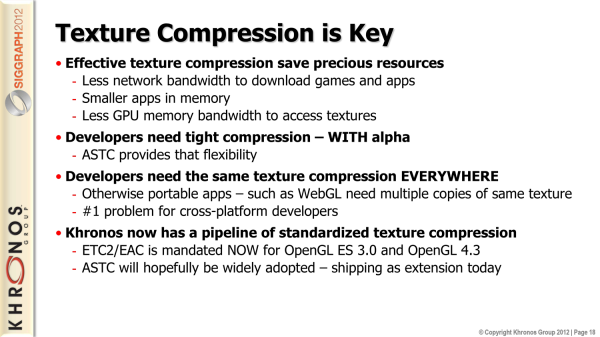 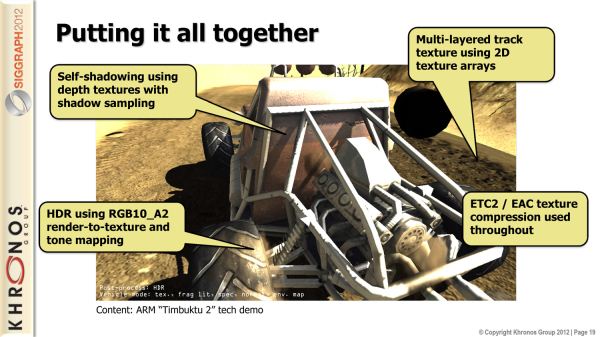 At the same time it will be interesting to see how developers adopt ETC. Just because it’s a standard doesn’t mean it has to be used, and while we can’t imagine Android developers not using it once OpenGL ES 3.0 is the baseline for applications, Apple bears keeping an eye on. As a PowerVR-only shop they have used PVRTC since day one, and so long as they don’t change to another brand of GPUs they wouldn’t need to actually back ETC.

Of course ETC isn’t the only texture compression format in the pipeline. Khronos is also working on the very interesting ASTC, which we’ll get to in a bit.