Of course no review of the Radeon HD 7000 series would be complete without a look at overclocking. In all of our testing AMD’s Southern Islands GPUs have proven to be impressive overclockers, including the reference 7870. In our 7870 review we hit 1150MHz on the core and 5.4GHz for the RAM, which made for a rather hefty overclock.

Our retail cards in turn one up the reference 7870. For core overclocking we hit 1200MHz on both cards, which is a 100MHz (9%) overclock over their factory overclocks, for a total of a rather incredible 200MHz (20%) overclock compared to a 7870’s stock clock. Given the overclockability we’ve seen for the Pitcairn GPU it’s unlikely that HIS, PowerColor, and other partners are having to do too much work for their factory overclocked cards, but we believe there’s at least some simple binning going on here, which would explain the better overclocks we’re seeing on these retail cards.

Interestingly this is all without overvolting of any kind. There still aren’t any tools capable of voltage control on the AMD reference PCB, so the limit is what you can get at reference voltages. If Pitcairn responds well to overvolting though, things could get very interesting in the future.

So what does a core clock of 1200MHz and a memory clock of 5.4GHz get you? In short, a lot of performance. But first, a look at power, temp, and noise. 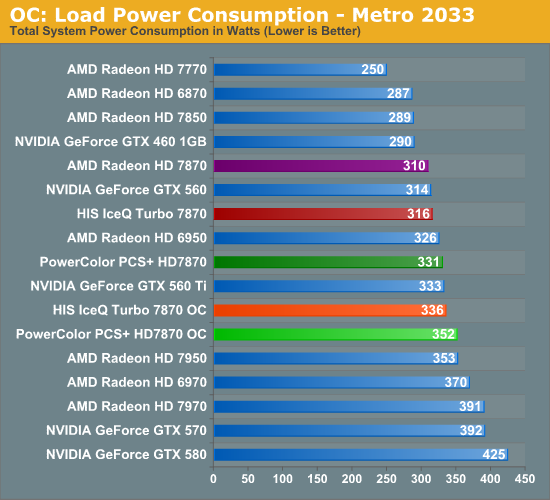 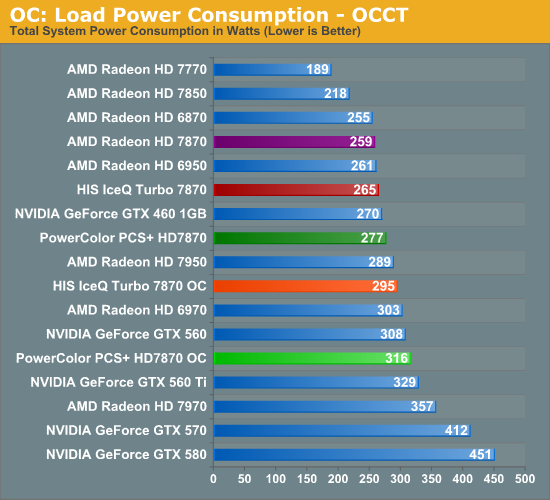 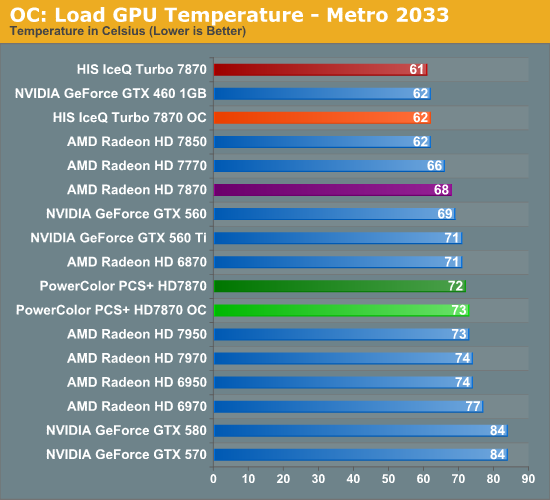 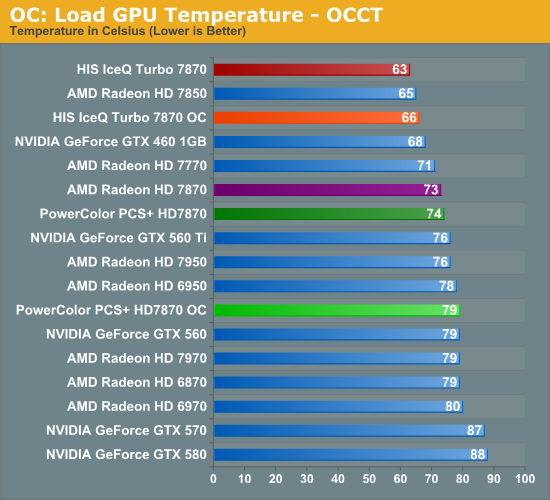 With the increase in power consumption comes the requisite increase in temperatures. At 79C under OCCT the PCS+ HD7870 is still well within our comfort zone, and this is the pathological case. Under Metro the increase is but a fraction, with temperatures going up by only a single degree.

Meanwhile the IceQ Turbo 7870 continues to flaunt its unusual cooler here. Under Metro it reaches a still relatively chilly 62C, and even OCCT can only get the card up to 66C, which is practically unheard of for a 190W card. Once HIS gets voltage controls working, voltage tweakers may very well end up having a field day here as there’s a good 15C+ of thermal headroom to play with on the GPU. Assuming of course that the VRM circuitry on the AMD reference PCB can hold up to further abuse. 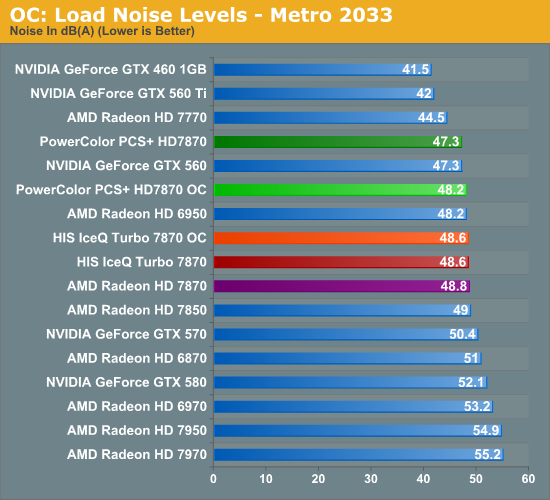 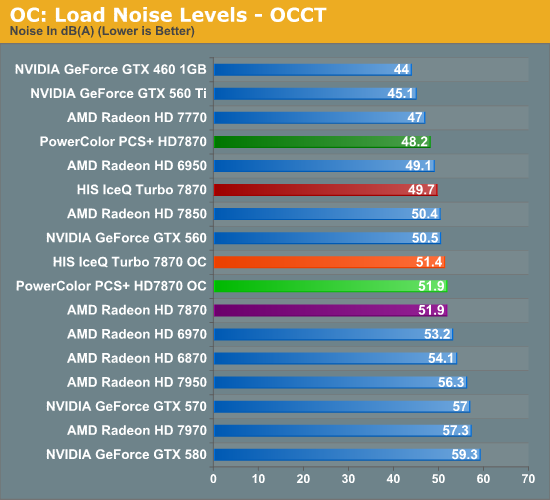 Finally, when it comes to noise the fact that temperatures don’t significantly rise under Metro means that there’s a minimal shift in load noise here. Our double overclocked cards are still quieter than the reference 7870, which in the case of the IceQ Turbo is thanks in large part to its low temperatures requiring no further work from the fan. Meanwhile the PCS+ gives up most of its noise advantage here. OCCT on the other hand finally sees every card jump up above 50dB, with both cards tying or beating the reference 7870 by a fraction of a decibel.

Ultimately the second overclock does have an impact on power consumption, but particularly when paying attention to gameplay as opposed to the pathological OCCT, the cost is very cheap. Unless you’re on a specific power budget or need to stay below the equivalent of 50dB on our charts, there’s still a fair bit of headroom to play with on these retail 7870s.