As with the rest of Southern Islands, AMD is making sure to promote the overclockability of their cards. And why not? So far we’ve seen every 7700 and 7900 card overclock by at least 12% on stock voltage, indicating there’s a surprising amount of headroom in these cards. The fact that performance has been scaling so well with overclocking only makes overclocking even more enticing. Who doesn’t want free performance?

So how does Pircairn and the 7800 series stack up compared to the 7700 and 7900 series when it comes to overclocking? Quite well actually; it easily lives up to the standards set by AMD’s previous Southern Islands cards.

As for memory overclocking, we hit 5.4GHz on both cards before general performance started to plateau, representing a 12.5% memory overclock. Considering that both cards use the same RAM on the same PCB, and the performance limitation is the memory bus itself, this is consistent with what we would have expected. With that said, we are a bit surprised that we got so far over 5GHz on 2Gb GDDR5 memory chips only rated for 5GHz in the first place; it indicates that Hynix’s GDDR5 production very mature.

With that said, because of the unique and non-retail nature of the 7850 AMD supplied us, the 7850 overclocking results should be considered low-confidence. The retail 7850 cards will be using simpler and no doubt cheaper coolers, PCBs, and VRMs; all of these can reduce the amount of overclocking headroom a card has. It’s by no means impossible that a 7850 could hit 1050MHz/5.4GHz, but it’s far more likely on a 7870 PCB than it is on a 7850 PCB.

Anyhow we’ll take a look at gaming performance in a moment, but in the meantime let’s take a look at what our overclocks do to power, temperature, and noise. 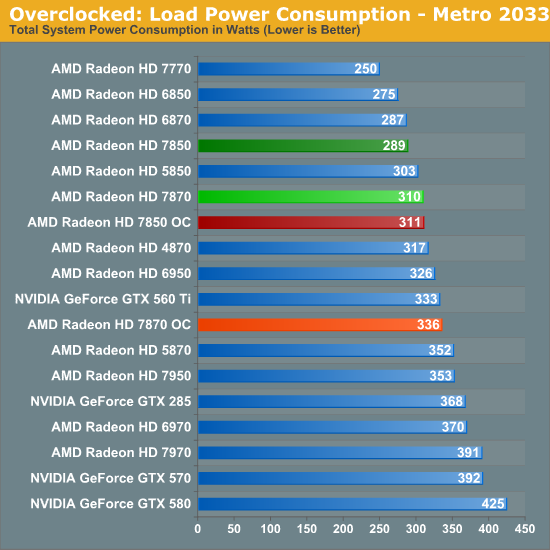 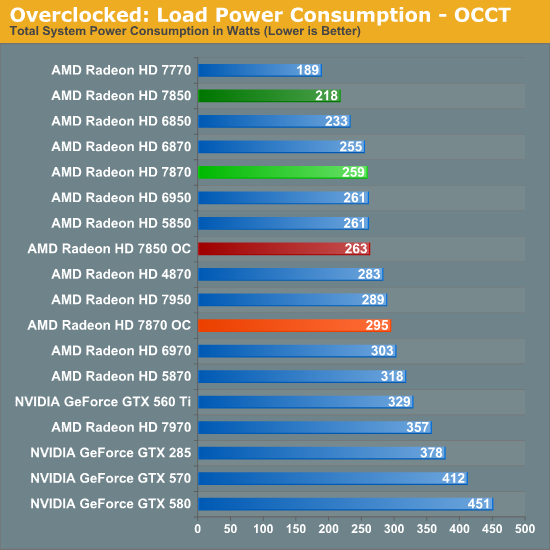 Even without a voltage increase overclocking does cause power consumption to go up, but not by a great deal. Under Metro the total difference is roughly 21W for the 7850 and 25W for the 7870, at least some of which can be traced back to the increased load on the CPU. Whereas on OCCT there’s a difference of nearly 40W on both cards, thanks to the increased PowerTune limits we’re using to avoid any kind of throttling when overclocked. All things considered with our overclocks power consumption for the 7850 approaches that of the 7870 and the 7870 approaches the GTX 560 Ti, which as we’ll see is a fairly small power consumption increase for the performance increase we’re getting. 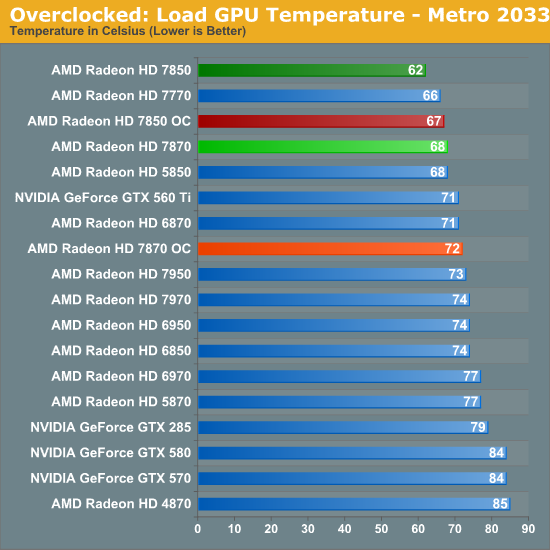 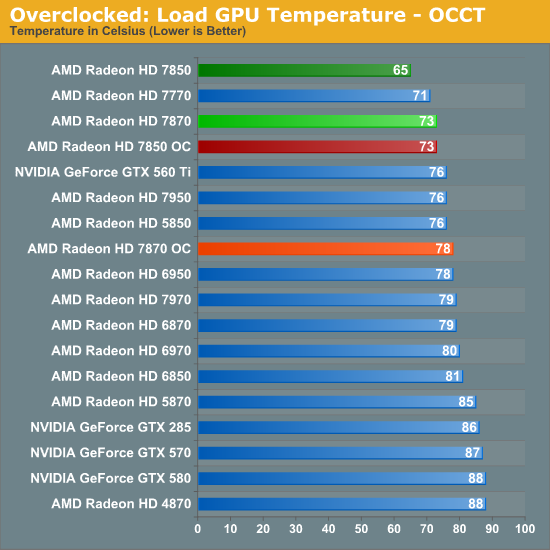 Of course when power consumption goes up so does temperature. For both cards under Metro and for the 7870 under OCCT this amounts to a 5C increase, while the 7850 rises 8C under Metro. However as with our regular temperature readings we would not suggest putting too much consideration into the 7950 numbers since it’s using a non-retail design. 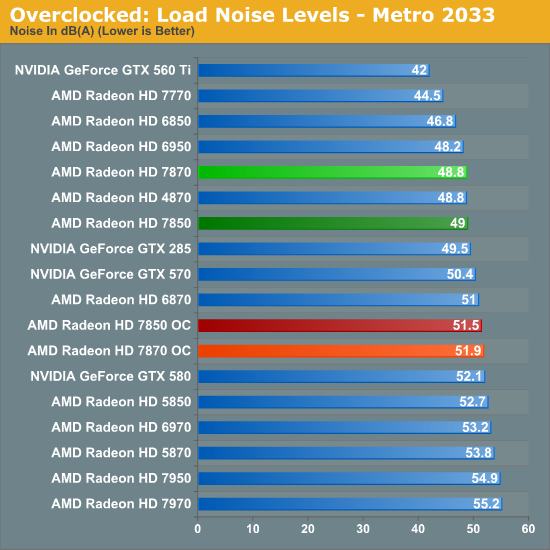 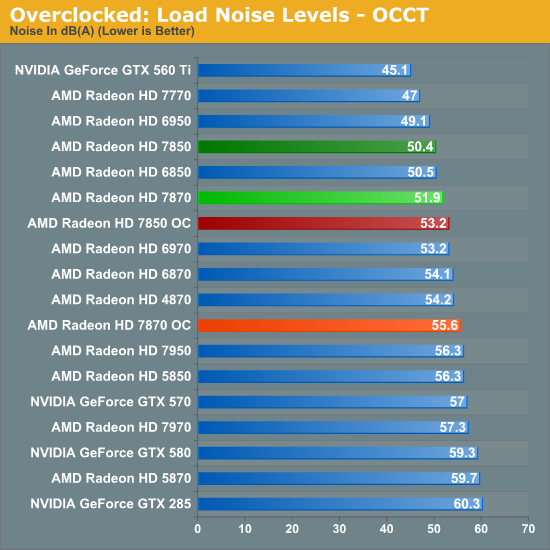 AMD’s conservative fan profiles mean that what are already somewhat loud cards get a bit louder, but in spite of what the earlier power draw differences would imply the increase in noise is rather limited. Paying particular attention to Metro 2033 here, the 7870 is just shy of 3dB louder at 51.9dB, while the 7850 increases by 2.7dB to 51.5dB. OCCT does end up being worse at 2.8dB and 3.7dB louder respectively, but keep in mind this is our pathological case with a much higher PowerTune limit.