As always, we wrap up our look at a new video card with a look at the physical performance attributes: power consumption, temperatures, and noise. Thanks to TSMC’s 28nm process AMD has been able to offer 6900 series performance on a much smaller chip, but what has that done to power consumption and all of its related properties? Let’s find out.

Please note that we’re including our 7870-based 7850 in these charts, even though none of AMD’s partners will be shipping a card in this exact configuration. Power consumption should be nearly identical to shipping cards, but temperatures and noise readings are going to be significantly different since most of those cards will be using open air coolers.

When getting a voltage reading on our 7800 cards through GPU-Z, it was interesting to note that the load voltage was almost identical between the two cards: 1.219v versus 1.213v. While we believe GPU-Z is giving us the right readings, we’re not sure whether the 7850 voltages are the same we’ll be seeing on shipping cards because of the PCB differences. 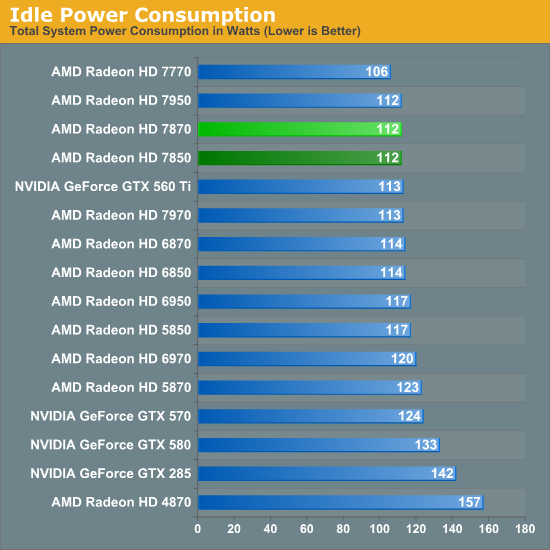 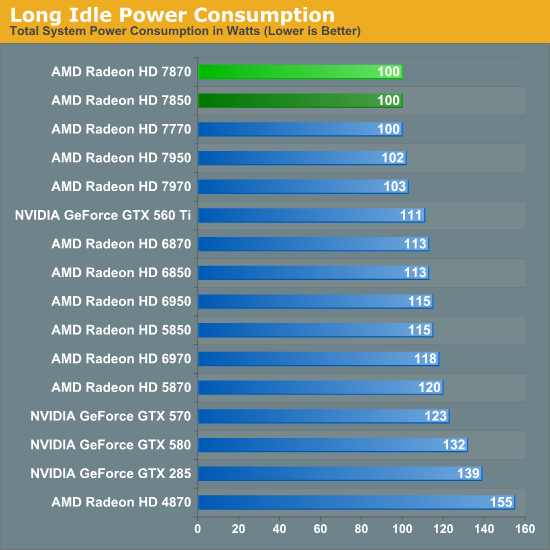 Long idle power consumption is virtually identical with the rest of the Southern Islands cards thanks to AMD’s ZeroCore Power technology. The next closest card is the GTX 560 Ti, and that’s at nearly 10W higher. 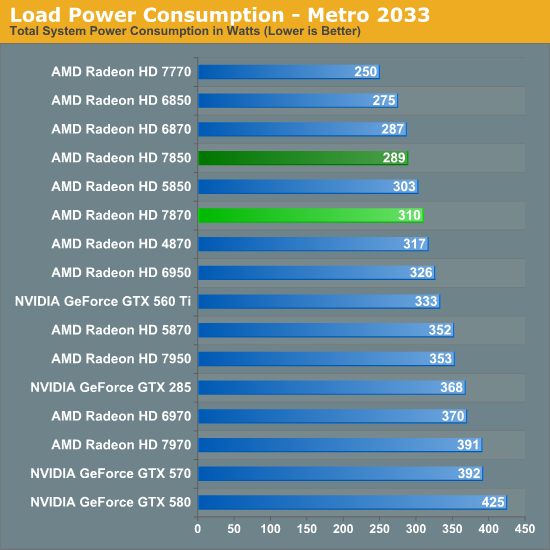 Moving on to load power testing, we have Metro 2033. Load power consumption here is about where you’d expect it to be, with the 7800 setups drawing more at the wall than the 6800 setups, but less than the 7900 and 6900 series. This is largely a consequence of performance, as the higher rendering performance of the 7800 series versus the 6800 series drives up CPU power consumption in order to generate more frames. 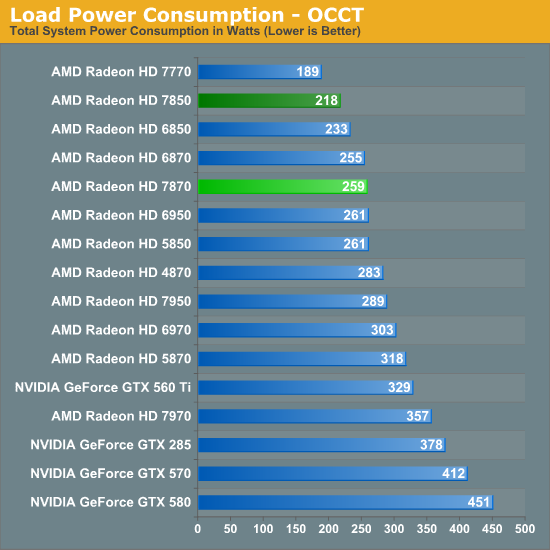 OCCT on the other hand gives us a more purified look at power consumption, and as you’d expect for 28nm it looks good. The 7870 ends up drawing only a few more watts at the wall compared to the 6870, showcasing the fact that the 7800 series is a drop-in replacement for the 6800 series from a power consumption perspective. The 7850 looks even better, capping out at 15W below the 6850, most likely as a result of PowerTune keeping the card firmly at 150W. Though it’s interesting to note that the measurements at the wall don’t perfectly align with the differences in PowerTune limits, with the 7850 drawing 30W more than the 7770 at the wall compared to a 50W PT difference, while the 7950 draws 30W more at the wall over the 7870 even though there’s only supposed to be a 10W PT difference. 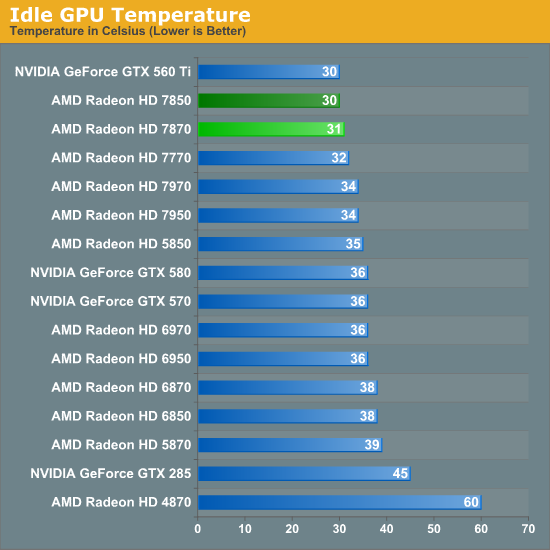 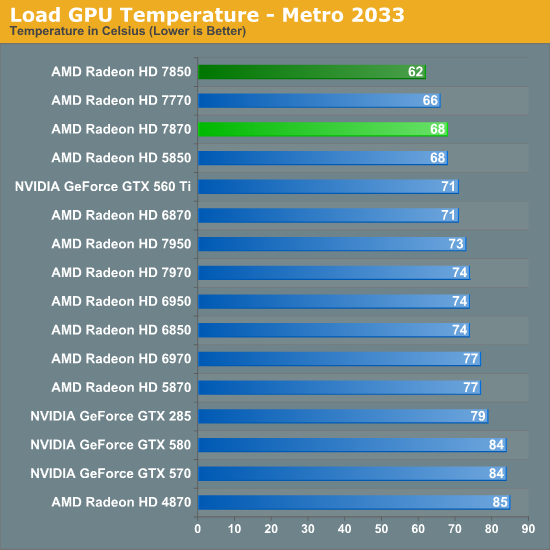 Under load, Metro temperatures are also quite good. At 62C the 7850 is the coolest card in this performance class, but keep in mind that it’s basically using an oversized cooler; retail cards will be open air coolers with much different characteristics. Otherwise at 68C the 7870 is still among the coolest cards, coming ahead of even the historically cool GTX 560 Ti, never mind the much hotter 6900 series. 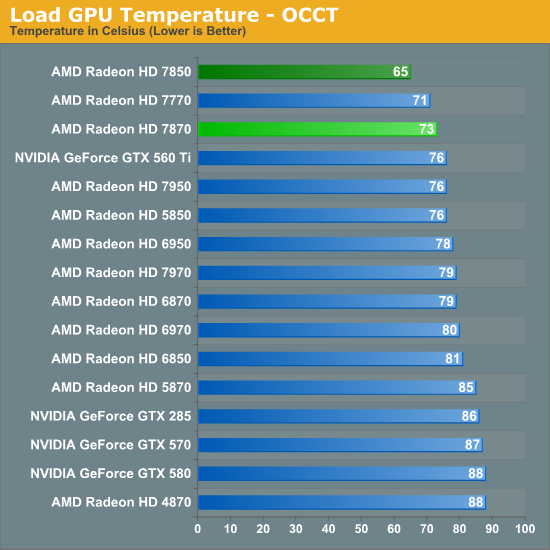 Load temperatures climb under OCCT, but again the 7800 series is among the coolest temperatures we see. Here we see the 7870 peak at 73C, whereas its last generation counterpart would be at 80C and the GTX 570 at a toasty 87C. 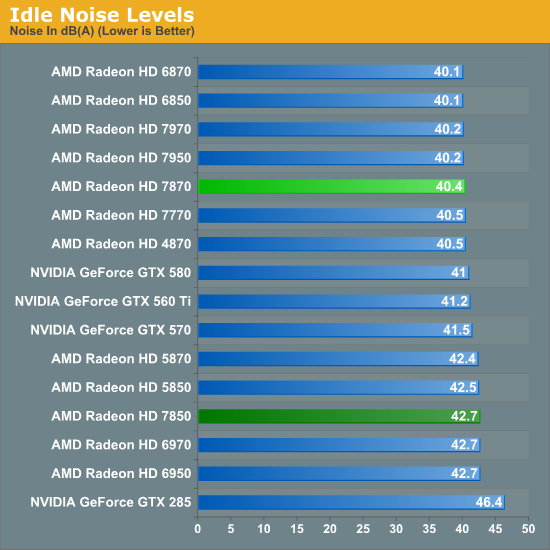 Moving on to noise testing, there are no major surprises at idle, with the 7870 hugging 40db. For whatever reason the 7850’s minimum fan state is roughly 200RPM higher than the 7870’s, but since no one will be using this cooler it’s not a significant result. 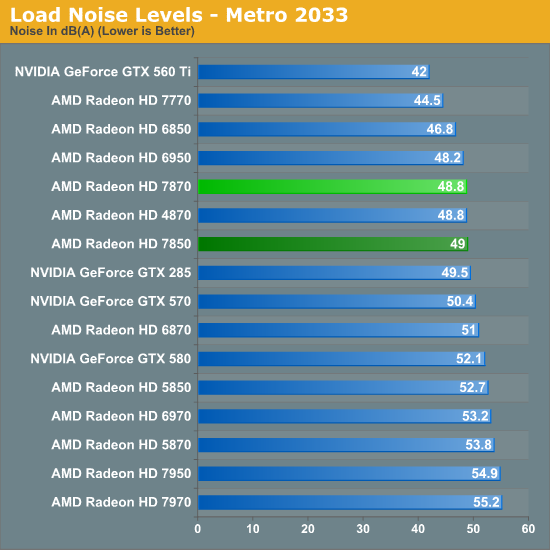 Consistent with AMD’s other 7000 series cards, we’re once again seeing the consequences of AMD’s aggressive cooling policies coupled with the use of a blower. At 48.8dB the 7870 is still quieter than the blower-based 6870, but it’s significantly louder than the open air cooled GTX 560 Ti, even though the latter consumes far more power and generates far more heat.  This doesn’t make the use of a blower the wrong choice, but combined with aggressive cooling policies it does hurt AMD. The GTX 570, in spite of using much more power than the 7870, is only less than 2dB louder even though it too uses a blower. 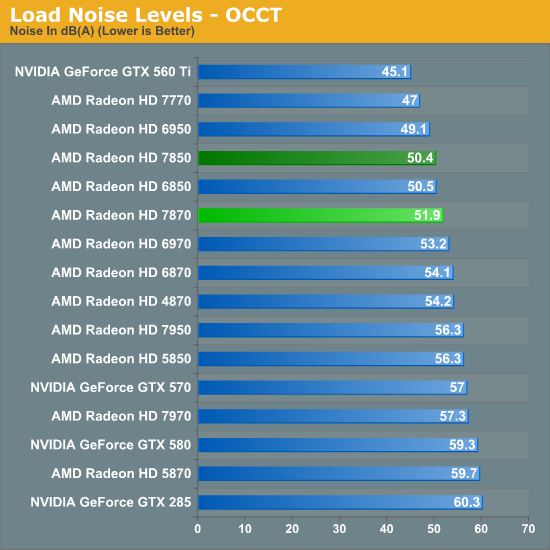 Last, but not least we have our OCCT noise results. Unlike Metro the 7800 series does better on a relative basis here, but this is mostly because NVIDIA doesn’t have a power throttling system quite like PowerTune. At 51.9dB the 7870 is not the quietest card, but it still manages to beat the 6970 and the PowerTune-less 6870.

All things considered there are no great surprises here on a relative basis, as the 7800 series performs like we’d expect for a blower based sub-200W video card.  Due to TSMC's 28nm process AMD greatly improves on their performance/power and performance/noise ratios with the 7800 series compared to the 6800 and 6900 series, while for their power class the 7800 series is slightly ahead of the pack on both power consumption and noise.

With that said, keep in mind that since most of AMD’s partners will be using open air coolers these results won’t be applicable to most retail cards. So for the temp/noise characteristics of retail cards you’ll want to look at individual card reviews when those start appearing later this month. This is particularly true for the 7950, where all of the retail cards will be using a different design than our sample.