In their marketing materials AMD is heavily pushing overclocking, and they have good reason to. With the 7970 we’ve established that Tahiti has quite a bit of overclocking headroom, and as the 7950 is clocked lower by default this opens up that headroom even further. Realistically AMD’s binning process means that the best clocking Tahiti GPUs are going to be allocated to the 7970 unless they have failed shaders, but even with that there’s quite a bit of potential on paper.

As with overclocking the 7970, our goal overclocking the 7950 is to see how much you can get for free; that is without any voltage adjustments. AMD’s reference PCBs are not particularly overbuilt for overclocking—cards like that will come later—so sticking to the reference voltage is the safest option, not to mention the easiest. With the 7970 we were able to get 200MHz (22%) overclocks without any voltage adjustment, and we’re hoping for the same out of the 7950.

With that said, we quickly ran into a wall on one card: the Sapphire 7950. Sapphire’s low VID of 0.993v may be great for temperature and noise at stock, but it’s not doing overclocking any favors. We only hit 950MHz at that voltage. As the Sapphire was the odd man out—every other card was at 1.093v—we did end up overvolting the Sapphire to 1.093v to see what it was capable of when put on similar footing as the rest of our cards.

After bringing up the voltage of our Sapphire card, all of our 7950s ended up overclocking to very similar levels. Our Sapphire and AMD cards topped out at 1025MHz core, a 225MHz (28%) overclock over a stock 7950 and a 125MHz (14%) overclock over the Sapphire’s factory overclock, while our XFX card reached 1050MHz, a 150MHz (17%) overclock beyond XFX’s factory overclock. Meanwhile the memory clocks on all of our cards topped out at 5.8GHz, beyond which we’d start seeing performance regressions from error correction on the memory bus. 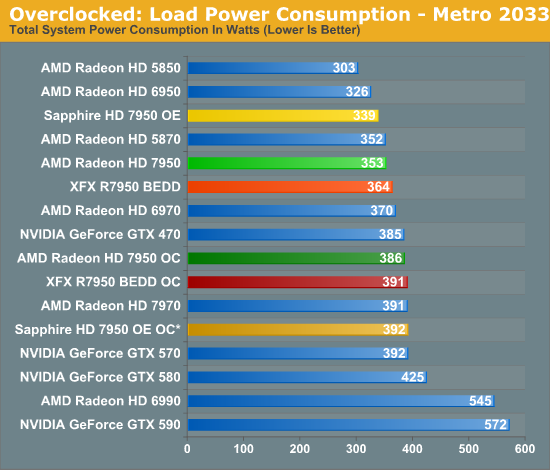 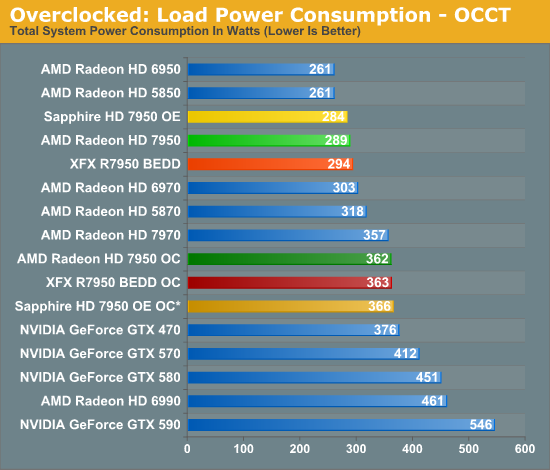 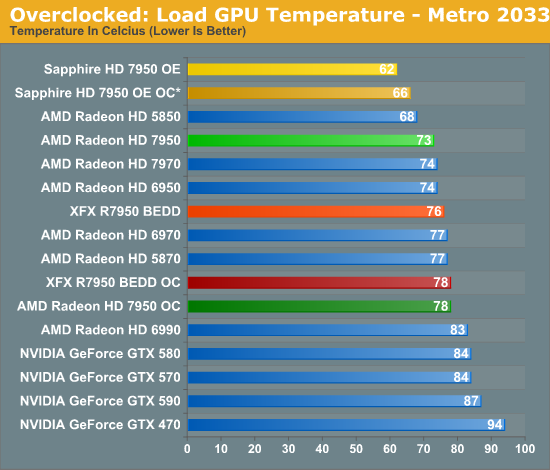 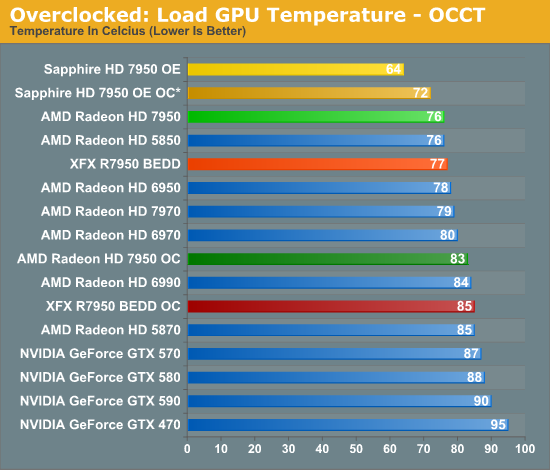 With the increase in power comes an increase in temperatures. The Sapphire card still does very well here staying in the low 70s even under OCCT, while the reference and XFX cards hit the high 70s under Metro and mid 80s under OCCT. As we’ve yet to really ascertain what the thermal limits are for Tahiti, it’s not clear whether there’s too much thermal headroom left for the GPU, particularly under OCCT. 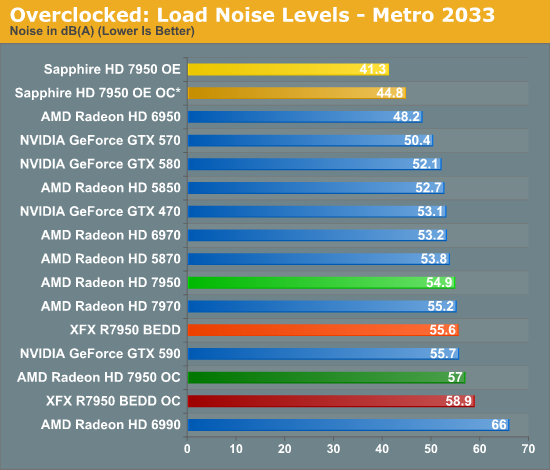 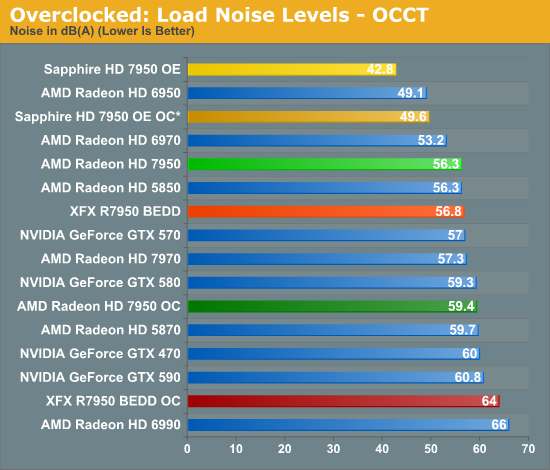 Last but not least we have load noise. The Sapphire card is once more a stellar performer, and we still can’t get it above 50dB even with OCCT. Unfortunately the XFX 7950 BEDD has its biggest fallout yet—it may be able to overclock well, but at 64dB under OCCT the performance isn’t going to be worth the immense amount of noise it creates to move enough air to keep the GPU cool.