One of the big things people were alluding to when they talked about how much they wanted Nokia to make a Windows Phone was the camera. Though the other smartphone OEMs are fast catching up, Nokia still has something of a unique position in the smartphone camera world thanks to its positioning with Zeiss and long history of making devices literally built around their camera. In addition, WP7 puts some emphasis on the importance of the camera with their mandatory two-step camera button, and unfortunately until this generation many of the WP7 devices haven’t really shipped high-end cameras. I wager that many wanted the N8 camera in a Windows Phone, and though the Lumia 800 (and N9) don’t have that kind of design around the camera module, they don’t skimp either. 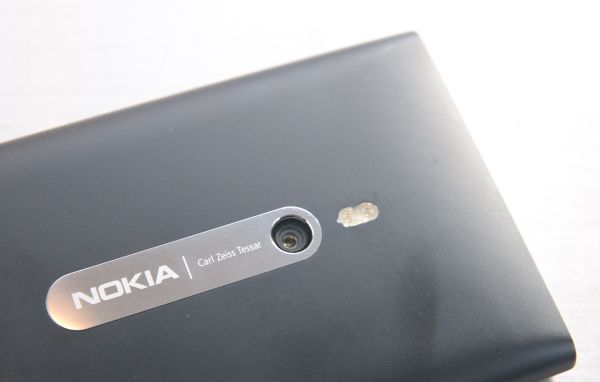 Before we go too further, let’s cover the logistics. The Lumia 800, like all Windows Phones, has a dedicated two-step camera button. It feels nice and clicky, and the two detents are easy enough to find and use. Nokia also locates its camera in the center of the device, which is unique and awesome for positioning the device with a tripod or mount - not a big thing for most users but still an intriguing choice. Since each Windows Phone can have different camera UI options it also bears going over those, and the Lumia 800 has more than most I’ve seen in a while. Shooting scenes, white balance, exposure offset, ISO, metering mode, contrast, saturation, focus (Macro or Normal), and resolution are all listed in still mode. Macro mode might sound a big confusing - this mode actually just gives you the full focus range (but as a result takes longer to run the AF routine) whereas normal has a more clamped range. WP7.5 also now saves and makes camera settings persistent after a close, something that was previously a big annoyance.

On paper the Lumia 800’s camera is definitely latest and greatest. It combines an 8 MP CMOS sensor that shoots stills of size 3264x2448 (4:3) or 3552x1998 (16:9) which is something we haven’t really seen before. Usually selecting a 16:9 shooting mode simply crops pixels off the top and bottom - on the Lumia 800, selecting this 16:9 mode does shave off some at the top and bottom, but gives you 288 more pixels in the horizontal direction and a truly wider field of view. 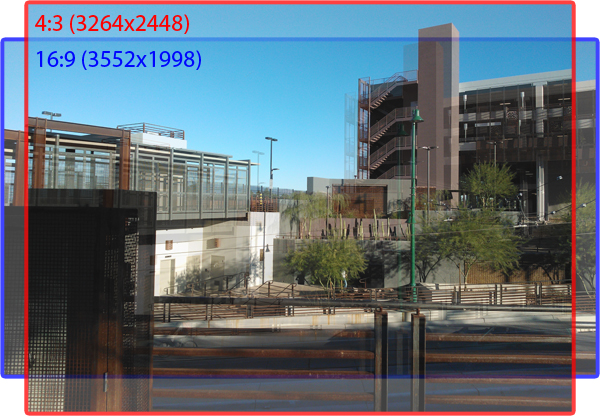 The only way I can see this being possible is that their CMOS really has an effective area of 3552x2448 (or slightly higher) and thus, both modes are a crop of that area. If you superimpose images from the two modes you can see that this is indeed the case (magnification remains the same). Nokia makes a big deal about this (as they well should) because it’s a pretty cool feature. As far as I can tell, the 8MP CMOS sensor’s size is 1/3.0” just like the N9. After a fair amount of digging, I tracked down that the CMOS sensor is “CMCS-85T330,” however this is an unfamiliar name to me. Based on the size and width, the pixels are no doubt in the 1.4µm class, however.

The Lumia 800 uses a Carl Zeiss branded optical system with an F/# of 2.2, which puts it in a small list of smartphones with F/2.2 optics. The camera module in the Lumia 800 is actually the same as the one inside the Nokia N9, and as a result performance differences between the two highlight the big differences in ISP between OMAP3 and MSM8x55. It’s difficult to know more about the intricacies of Nokia’s camera design, so I reached out on Twitter and learned that this design is indeed 5P (denoting 5 plastic elements) as opposed to the 4P that we’ve seen in many previous designs.

On paper, the Lumia 800’s camera system is absolutely top tier, now the question becomes how it performs in our controlled and outdoor testing. To evaluate this, we turned to our lightbox tests with the lights on and off, outdoor testing at our test locations, and the new semi-revamped camera tests with the ISO12233, distortion, and color checker charts.

In the lightbox test with the lights on, the Lumia 800 is unsurprisingly very sharp. The small focus grooves on the Exakta are easy to make out and show very well. I think JPEG compression in WP7 or ISP might have been a bit aggressive here as the file is only 1.1 MB and shows some compression artifacts around lettering on the camera and other high spatial frequencies. The compression artifacts actually have the unintended consequence of somewhat masking sensor noise in the lights on test as well. The other complaint is that the image is very undersaturated and lifeless, unfortunately. I feel like this is some AWB issue since numerous other photos with the Lumia 800 not in a controlled box have great white balance. With the lights off (and using the dual LED flash) the Lumia 800 actually looks way more saturated and lively. WP7 also deserves lots of credit for always illuminating a dark scene during the autofocus routine, something so many smartphones still aren’t doing right.

The other controlled tests sort of tell the same story. The GMB color checker card looks a bit red, and a few other shots were blue of the same target. I don’t exactly have daylight color temperature bulbs or anything scientific for testing (yet) but this hunting around for proper white balance seems to be something specific to QCT’s SoCs still. Distortion is pretty low, again compared to SGS2 and some other culprits not a big deal at all. The ISO12233 charts also show that the Lumia’s camera (and by relation ISP and Windows Phone) don’t do absurd oversharpening like we’ve seen on some phones. We also see spatial frequencies on par with the other 8 MP shooters, though not much more. I can see up to the 14 line in the horizontal direction and 15 in the vertical before the contrast reversal. It’s clear to me at least that smartphone optical designs are obviously not diffraction-limited for obvious reasons.

It is in the outdoor scenes, the Lumia 800 really shines and starts to look a lot like the Nokia cameras of note we’ve seen before. Again we don’t have access to locations 1 or 2 anymore, only 3, 4, 5, 6, and 7 are refreshed. In addition, seasons changing makes getting the same lighting difficult. In virtually every scene the Lumia 800 has excellent sharpness and appearance. Only in test 7 is the Lumia 800 strangely bluer than most.

Unsurprisingly, the Lumia 800’s camera comes out looking very good against the rest of the 8MP competition, and for me this is the first F/2.2 8 MP shooter I’ve come across. With less compression and better ISP, it could be even better than most. Although I haven’t had a chance to test the N9, it would be interesting to see the differences that its very different ISP makes for.

The Lumia 800 shoots HD video at up to 720p30 at 14.0 Mbps H.264 baseline. This is a pretty high bitrate for 720p and, despite being baseline CABAC with 1 reference frame, looks very good. It is a bit strange to see a super high end level smartphone shipping which only records up to 720p, but I’d personally take really good 720p over mediocre 1080p any day (just another place where looking only at video resolution can be misleading). This 720p limitation is no doubt a result of limitations imposed by MSM8255’s onboard video encoder, which to my knowledge can only encode up to 1280x720 H.264. The Windows Phone team likes to talk about how they don’t need the bleeding edge of SoC performance, but this is just another axis of improvement that isn’t strictly pure performance. Audio shot with the video is stereo AAC at 48.0 Kbps 48 kHz.

Oddly enough the Lumia 800 software defaults to shooting VGA unless you go in and select 720p instead. Controls here remain notably verbose, including most of the same ISO, exposure, and shooting mode options, in addition to continuous AF options.

As usual, we shot video using the phone under test at the our bench location and uploaded the result to YouTube and locally (89 MB) so you can watch without the YouTube transcode.

Given this bitrate and optics quality it’s unsurprising to me that the Lumia 800’s 720p30 quality is awesome. The video is sharp and subjectively looks awesome. In addition, its continuous autofocus runs quickly and without too much distraction. The Lumia 800 ends up falling into that category we talked about earlier of devices that don’t ship with 1080p video recording capabilities but instead deliver excellent 720p at a similar bitrate.