For some reason, even though I’ve touched nearly all the Motorola Droids at some point or another, I’ve never managed to actually sit down and use one of the laptop docks. Sure, I poked at the Atrix lapdock for a little while back when that came out, but never really got the chance to experiment and try to fit it into my workflow. 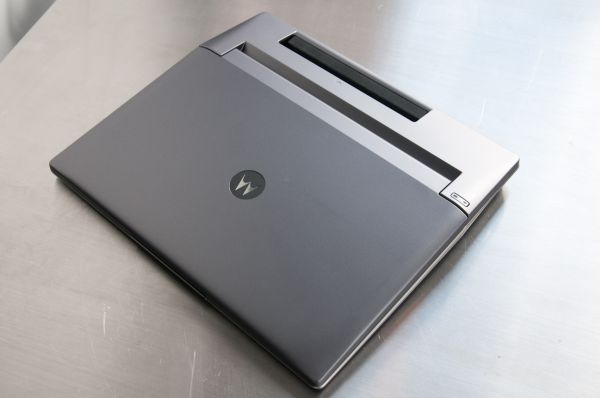 This time we’ve got the Lapdock 100 which is compatible with virtually all of the newer laptop-dock enabled phones, including the RAZR, Atrix 2, Bionic, Electrify, and Photon 4G. That list is essentially all of the devices that ship with the webtop application installed with the exception of the Atrix. I didn’t realize it, but the older Atrix laptop dock is incompatible with these newer devices owing to the microHDMI and microUSB ports being position swapped. 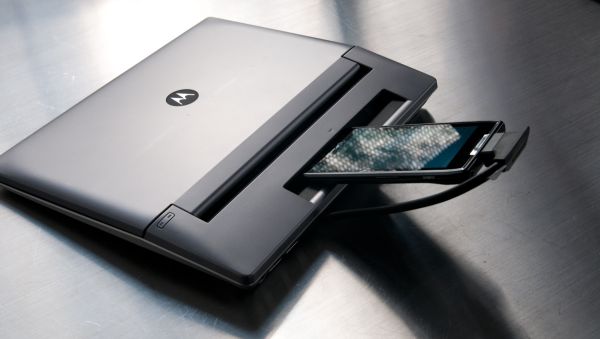 In case Motorola’s lapdock concept is one that you haven’t been introduced to yet, the idea is to use the smartphone SoC in conjunction with some virtualization (called the Webtop Application) to drive a Linux desktop environment and a few applications on a larger canvas. The laptop dock doesn’t include much more than peripherals (keyboard and trackpad), a display, and battery - everything else really is running on the attached device. The smartphone display then becomes a window which you can interact with alongside desktop Firefox or a few other bundled applications. Running applications become tabs at the top of the smartphone window pane, and the android navigational buttons are at the bottom. 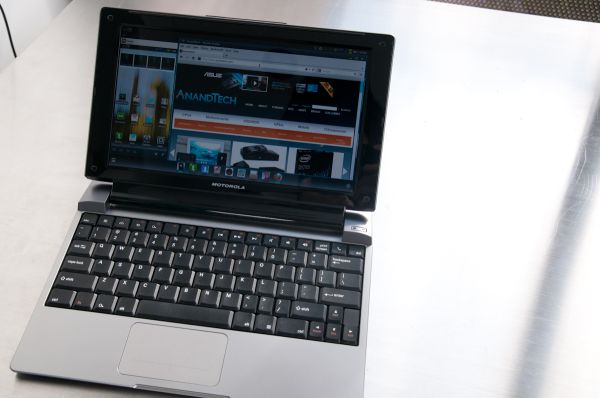 The Lapdock 100 includes a 10.1” 1366x768 display, internal battery for powering the device and the dock, a flexible connector for attaching to compatible phones, two USB ports, trackpad, and a netbook sized QWERTY keyboard with a few positional oddities but overall pretty responsive key domes. The only real issue I have with the keyboard is that the “,./” trio of keys at the right are compressed into a smaller than normal space to accommodate the arrow keys at far right. This is sort of standard netbook fare, although that’s to be expected considering the display’s 10.1” size. 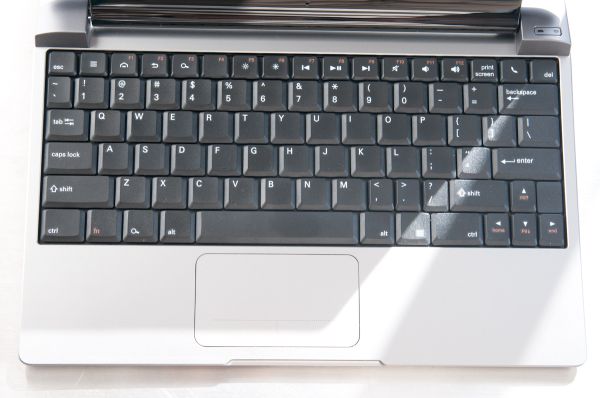 The trackpad is probably the only major frustration I had with the Lapdock 100. I found it difficult to trigger the scroll gesture and instead resorted to using page up and page down for navigation, and it’s also easy to sometimes confuse right and left clicking since the buttons aren’t discrete but rather part of the trackpad area.

The big selling point for the Lapdock 100 (and the upcoming 500 Pro) over either the Bionic or Atrix docks is that they’re compatible with more than just one device, and future devices as well. On the Lapdock 100 instead of really getting a dock, there’s a rubberized flexible connector, and the phone then rests inside a rubberized pocket. I still had the Bionic kicking around and tried it with the Lapdock 100 in conjunction with the RAZR and sure enough things work perfectly. The only odd part about using the dock with the RAZR is that the cable isn’t quite long enough for it to lay horizontally in the rubberized area, instead the only way I could fit it in was vertically. 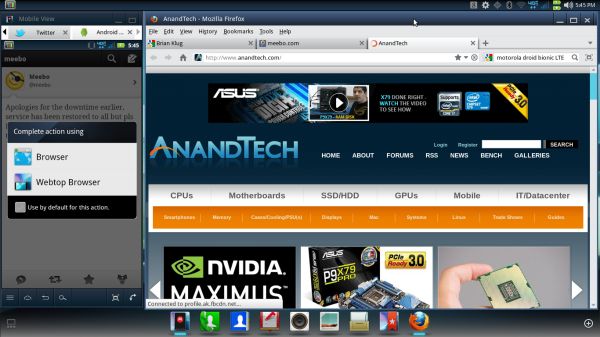 The Lapdock UI looks like what you’d get if you crossed motoblur with a linux desktop. There are some dock-like shortcuts at bottom, a status bar which mirrors Android’s status bar at the top, and the usual sort of window controls. I find myself wishing that Motorola would expose a developer mode and allow for a native shell inside the webtop application beyond just Firefox. 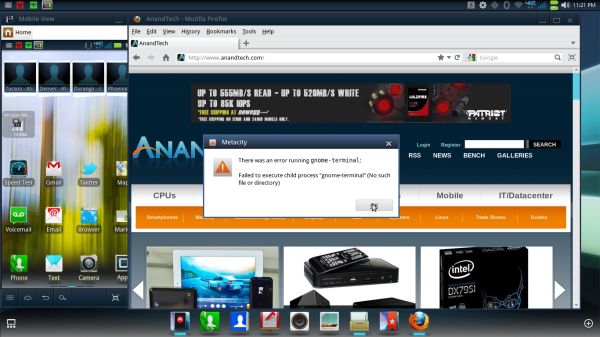 Nope, No shell for you!

Unfortunately at this point the only webtop application types are really what ship with the device, what exist inside the Android mobile view, or HTML5 web apps which run inside Firefox, and there’s explicit mention of no shell access. 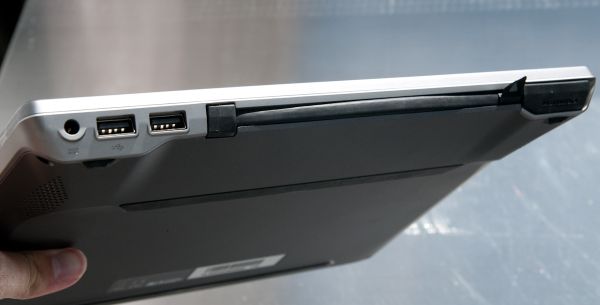 I mentioned the USB ports previously - these can be used in conjunction with any standard USB HID keyboard, mouse, or headset. In addition if a USB mass storage device is attached, it is automatically mounted and storage is visible to the webtop file manager application and to android as “usbdisk_1.3/” or similar depending on the device (as opposed to sdcard/ and sdcard-ext/ for those volumes). 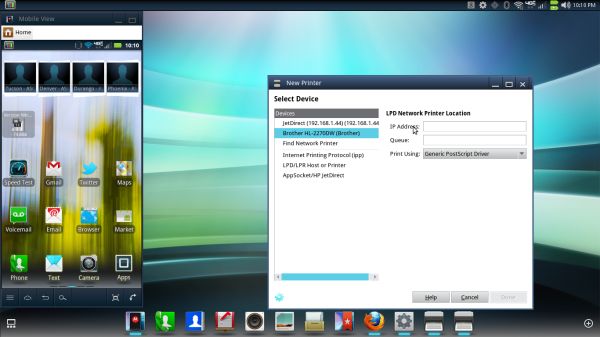 There’s also the ability to print from the Lapdock using built-in CUPS over the network, which I tested with two Brother and Samsung network printers. The settings panes provide all the basic functionality you need to print, and Firefox likewise lets you shoot jobs over just fine.

The lapdock’s size makes it feel a lot like a netbook in the hands. The only place where it’s a bit clumsy is in the weight and balance department; nearly all the weight and thickness on the lapdock is at the back quarter presumably where the battery is. That makes it a bit weird to balance on your knees or hold with one hand compared to an ordinary notebook or netbook.

The lapdock is a good compliment to any of the compatible smartphones if nothing else because it’ll simultaneously charge the phone and give you a much bigger display to play around on. That said, there’s much more functionality that could be unlocked here were more open development (and not HTML5 webapps) enabled. Of course, the other thing is that the lapdock lets you essentially use a desktop browser without resorting to paying tethering fees or using a third party application. It’s cheaper at $249 (as of this writing) than the Chromebooks (which hover between $350 and $450) which subjectively offer the similar level of occasionally sluggish browsing performance.