AMD clearly states in its reviewer's guide that CPU bound gaming performance isn't going to be a strong point of the FX architecture, likely due to its poor single threaded performance. However it is useful to look at both CPU and GPU bound scenarios to paint an accurate picture of how well a CPU handles game workloads, as well as what sort of performance you can expect in present day titles.

Civ V's lateGameView benchmark presents us with two separate scores: average frame rate for the entire test as well as a no-render score that only looks at CPU performance. 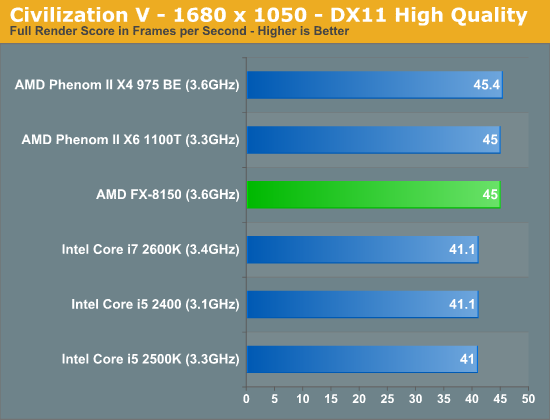 While we're GPU bound in the full render score, AMD's platform appears to have a bit of an advantage here. We've seen this in the past where one platform will hold an advantage over another in a GPU bound scenario and it's always tough to explain. Within each family however there is no advantage to a faster CPU, everything is just GPU bound. 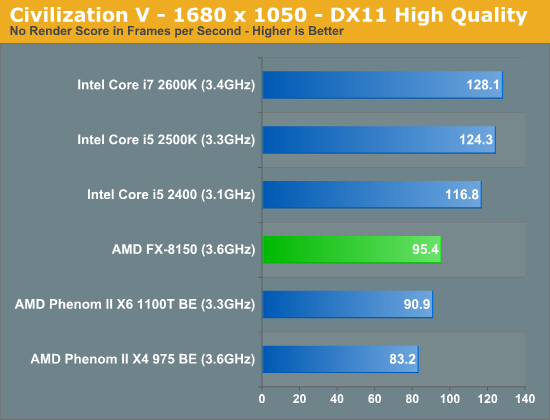 Looking at the no render score, the CPU standings are pretty much as we'd expect. The FX-8150 is thankfully a bit faster than its predecessors, but it still falls behind Sandy Bridge. 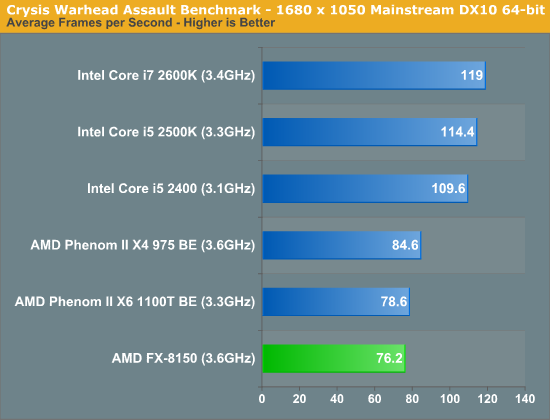 In CPU bound environments in Crysis Warhead, the FX-8150 is actually slower than the old Phenom II. Sandy Bridge continues to be far ahead. 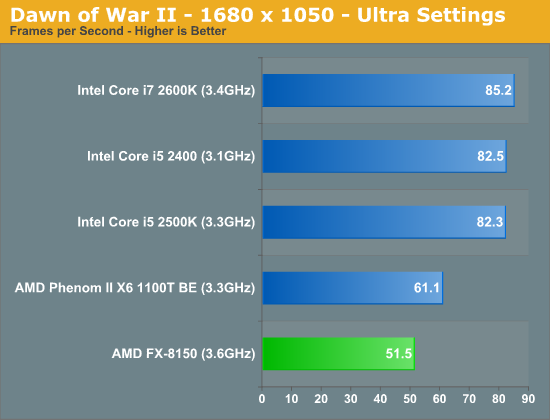 We see similar results under Dawn of War II. Lightly threaded performance is simply not a strength of AMD's FX series, and as a result even the old Phenom II X6 pulls ahead. 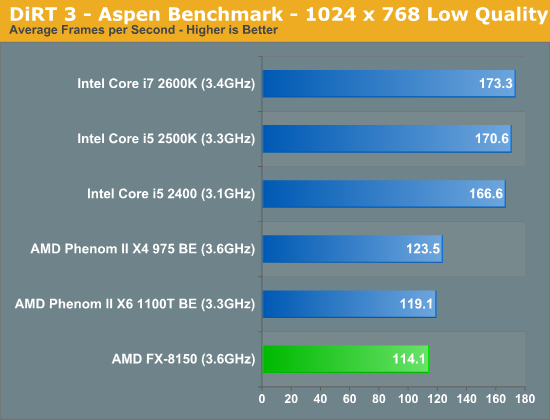 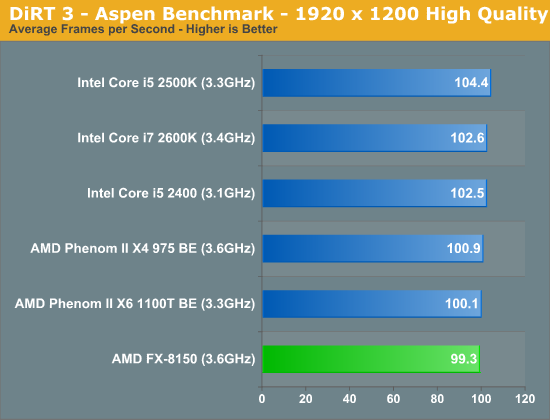 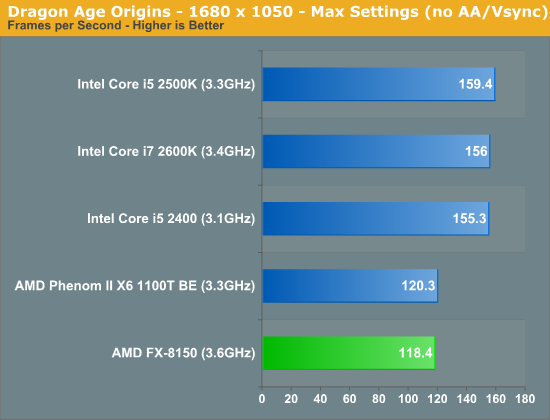 Dragon Age is another CPU bound title, here the FX-8150 falls behind once again.

Metro 2033 is pretty rough even at lower resolutions, but with more of a GPU bottleneck the FX-8150 equals the performance of the 2500K: 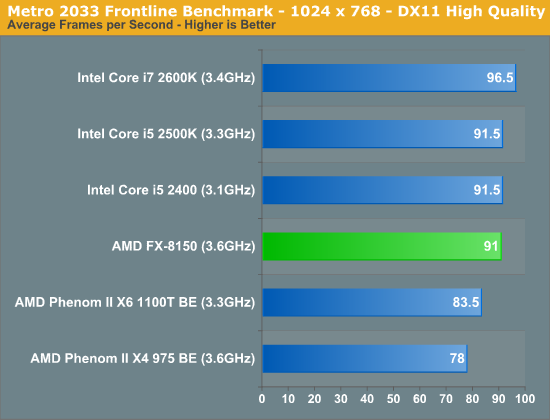 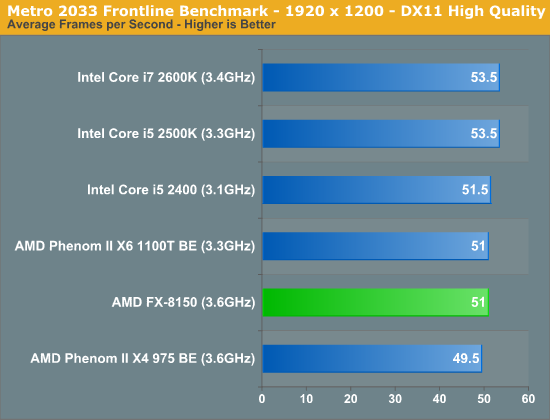 While id's long awaited Rage title doesn't exactly have the best benchmarking abilities, there is one unique aspect of the game that we can test: Megatexture. Megatexture works by dynamically taking texture data from disk and constructing texture tiles for the engine to use, a major component for allowing id's developers to uniquely texture the game world. However because of the heavy use of unique textures (id says the original game assets are over 1TB), id needed to get creative on compressing the game's textures to make them fit within the roughly 20GB the game was allotted.

The result is that Rage doesn't store textures in a GPU-usable format such as DXTC/S3TC, instead storing them in an even more compressed format (JPEG XR) as S3TC maxes out at a 6:1 compression ratio. As a consequence whenever you load a texture, Rage needs to transcode the texture from its storage codec to S3TC on the fly. This is a constant process throughout the entire game and this transcoding is a significant burden on the CPU.

The Benchmark: vt_benchmark flushes the transcoded texture cache and then times how long it takes to transcode all the textures needed for the current scene, from 1 thread to X threads. Thus when you run vt_benchmark 8, for example, it will benchmark from 1 to 8 threads (the default appears to depend on the CPU you have). Since transcoding is done by the CPU this is a pure CPU benchmark. I present the best case transcode time at the maximum number of concurrent threads each CPU can handle: 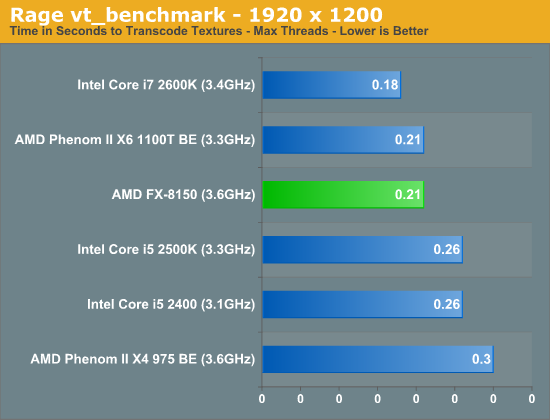 The FX-8150 does very well here, but so does the Phenom II X6 1100T. Both are faster than Intel's 2500K, but not quite as good as the 2600K. If you want to see how performance scales with thread count, check out the chart below: 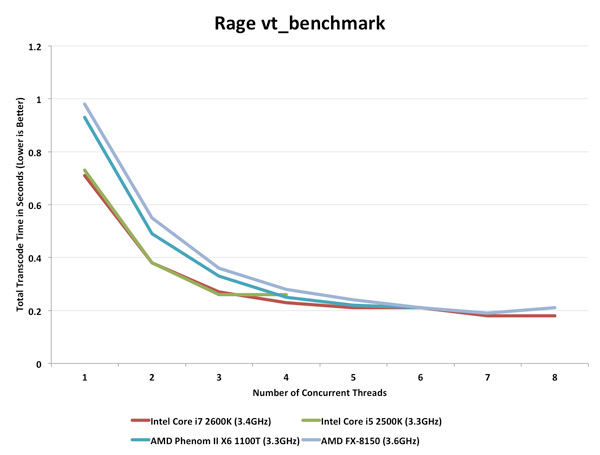 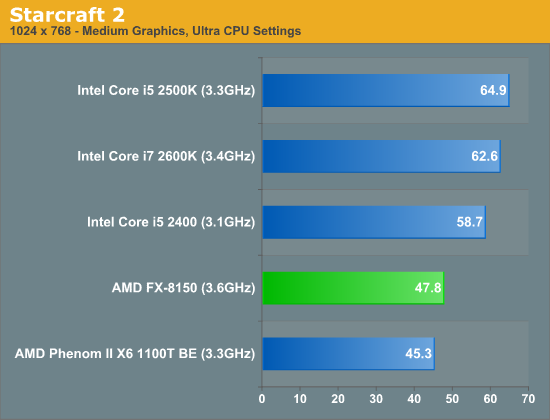 Starcraft 2 has traditionally done very well on Intel architectures and Bulldozer is no exception to that rule. 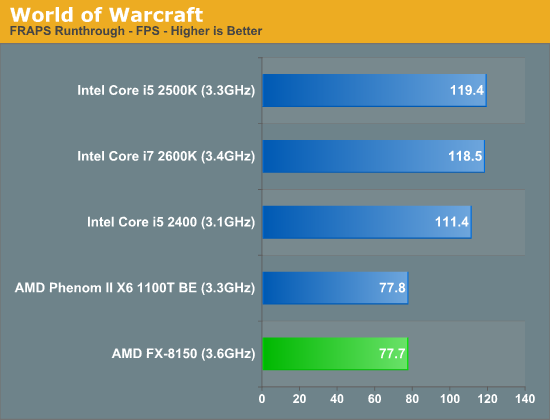