Like Llano, Bulldozer incorporates significant clock and power gating throughout its design. Power gating allows individual idle cores to be almost completely powered down, opening up headroom for active cores to be throttled up above and beyond their base operating frequency. Intel's calls this dynamic clock speed adjustment Turbo Boost, while AMD refers to it as Turbo Core.

The Phenom II X6 featured a rudimentary version of Turbo Core without any power gating. As a result, Turbo Core was hardly active in those processors and when it was on, it didn't stay active for very long at all.

Bulldozer's Turbo Core is far more robust. While it still uses Llano's digital estimation method of determining power consumption (e.g. the CPU knows ALU operation x consumes y-watts of power), the results should be far more tangible than what we've seen from any high-end AMD processor in the past. 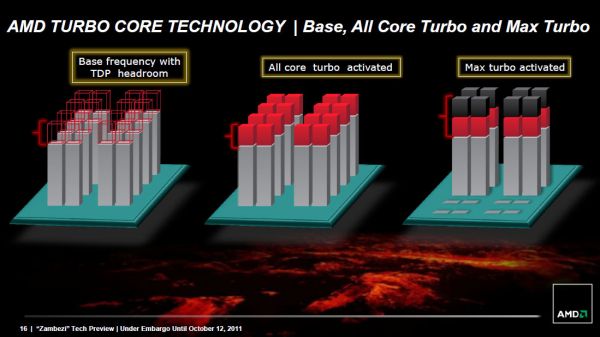 Turbo Core's granularity hasn't changed with the move to Bulldozer however. If half (or fewer) of the processor cores are active, max turbo is allowed. If any more cores are active, a lower turbo frequency can be selected. Those are the only two frequencies available above the base frequency.

AMD doesn't currently have a Turbo Core monitoring utility so we turned to Core Temp to record CPU frequency while running various workloads to measure the impact of Turbo Core on Bulldozer compared to Phenom II X6 and Sandy Bridge.

First let's pick a heavily threaded workload: our x264 HD benchmark. Each run of our x264 test is composed of two passes: a lightly threaded first pass that analyzes the video, and a heavily threaded second pass that performs the actual encode. Our test runs four times before outputting a result. I measured the frequency of Core 0 over the duration of the test.

Let's start with the Phenom II X6 1100T. By default the 1100T should run at 3.3GHz, but with half or fewer cores enabled it can turbo up to 3.7GHz. If Turbo Core is able to work, I'd expect to see some jumps up to 3.7GHz during the lightly threaded passes of our x264 test: 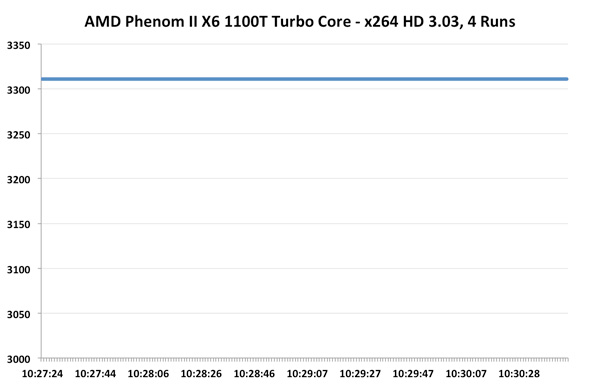 Unfortunately we see nothing of the sort. Turbo Core is pretty much non-functional on the Phenom II X6, at least running this workload. Average clock speed is a meager 3.31GHz, just barely above stock and likely only due to ASUS being aggressive with its clocking. 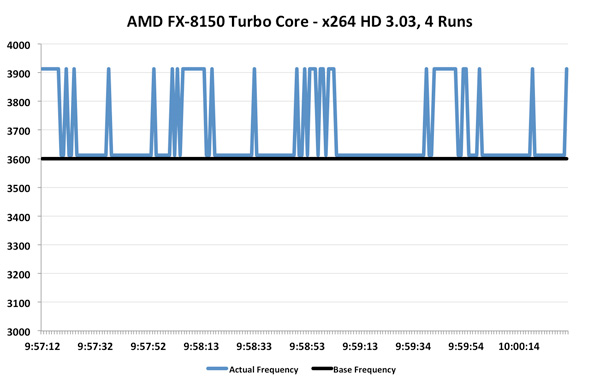 Ah that's more like it. While the average is only 3.69GHz (+2.5% over stock), we're actually seeing some movement here. This workload in particular is hard on any processor as you'll see from Intel's 2500K below: 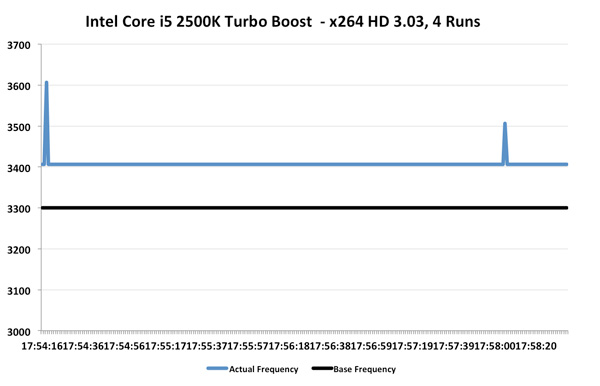 The 2500K runs at 3.3GHz by default, but thanks to turbo it averages 3.41GHz for the duration of this test. We even see a couple of jumps to 3.5 and 3.6GHz. Intel's turbo is a bit more consistent than AMD's, but average clock increase is quite similar at 3%.

Now let's look at the best case scenario for turbo: a heavy single threaded application. A single demanding application, even for a brief period of time, is really where these turbo modes can truly shine. Turbo helps launch applications quicker, make windows appear faster and make an easy time of churning through bursty workloads.

We turn to our usual favorite Cinebench 11.5, as it has an excellent single-threaded benchmark built in. Once again we start with the Phenom II X6 1100T: 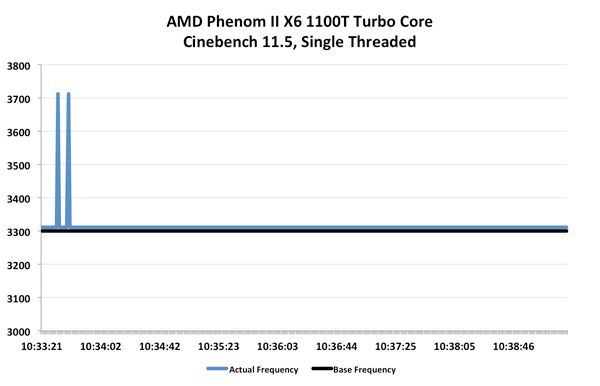 Turbo Core actually works on the Phenom II X6, albeit for a very short duration. We see a couple of blips up to 3.7GHz but the rest of the time the chip remains at 3.3GHz. Average clock speed is once again, 3.31GHz. 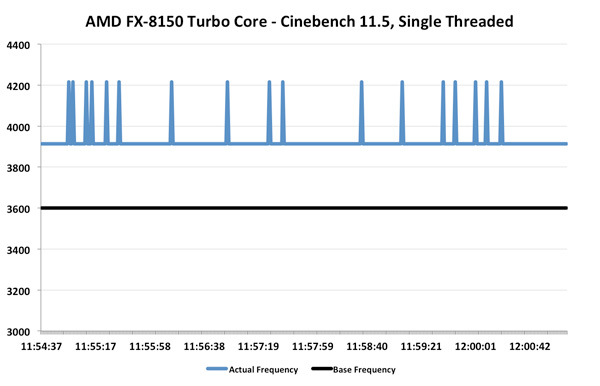 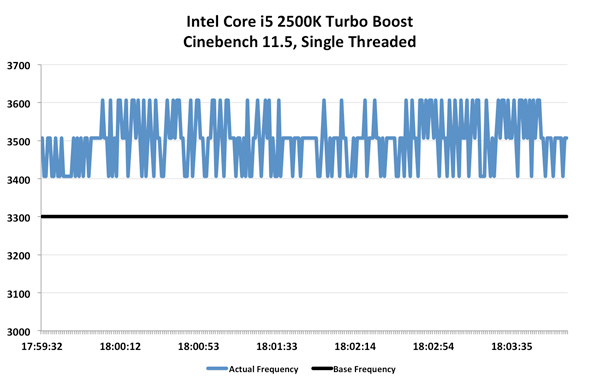 Intel's turbo fluctuates much more frequently here, moving between 3.4GHz and 3.6GHz as it runs into TDP limits. The average clock speed remains at 3.5GHz, or a 6% increase over the base. For the first time ever, AMD actually does a better job at scaling frequency via turbo than Intel. While I would like to see more granular turbo options, it's clear that Turbo Core is a real feature in Bulldozer and not the half-hearted attempt we got with Phenom II X6. I measured the performance gains due to Turbo Core across a number of our benchmarks: 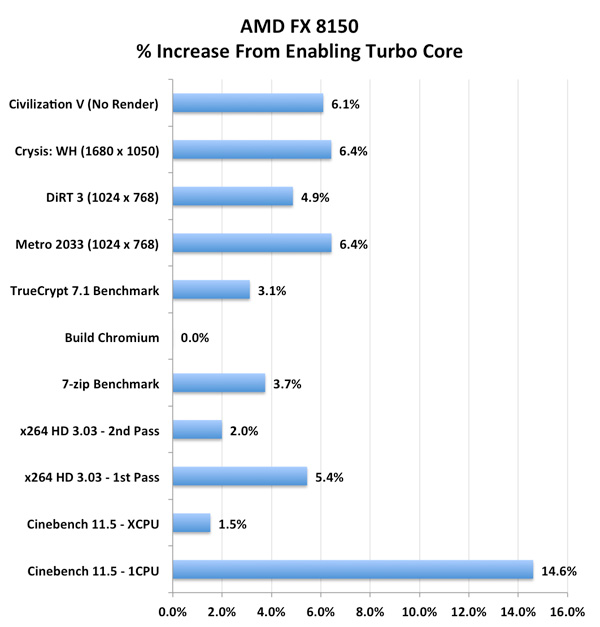 Average performance increased by just under 5% across our tests. It's nothing earth shattering, but it's a start. Don't forget how unassuming the first implementations of Turbo Boost were on Intel architectures. I do hope with future generations we may see even more significant gains from Turbo Core on Bulldozer derivatives.

When AMD introduced the original Phenom processor it promised more energy efficient execution by being able to clock each core independently. You could have a heavy workload running on Core 0 at 2.6GHz, while Core 3 ran a lighter thread at 1.6GHz. In practice, we felt Phenom's asynchronous clocking was a burden as the CPU/OS scheduler combination would sometimes take too long to ramp up a core to a higher frequency when needed. The result, at least back then, was that you'd get significantly lower performance in these workloads that shuffled threads from one core to the next. The problem was so bad that AMD abandoned asynchronous clocking altogether in Phenom II.

The feature is back in Bulldozer, and this time AMD believes it will be problem free. The first major change is with Windows 7, core parking should keep some threads from haphazardly dancing around all available cores. The second change is that Bulldozer can ramp frequencies up and down much quicker than the original Phenom ever could. Chalk that up to a side benefit of Turbo Core being a major part of the architecture this time around.

Asynchronous clocking in Bulldozer hasn't proven to be a burden in any of our tests thus far, however I'm reluctant to embrace it as an advantage just yet. At least not until we've had some more experience with the feature under our belts.