The Impact of Bulldozer's Pipeline

With a new branch prediction architecture and an unknown, but presumably significantly deeper pipline, I was eager to find out just how much of a burden AMD's quest for frequency had placed on Bulldozer. To do so I turned to the trusty N-Queens solver, now baked into the AIDA64 benchmark suite.

The N-Queens problem is simple. On an N x N chessboard, how do you place N queens so they cannot attack one another? Solving the problem is incredibly branch intensive, and as a result it serves as a great measure of the impact of a deeper pipeline.

The AIDA64 implementation of the N-Queens algorithm is heavily threaded, but I wanted to first get a look at single-core performance so I disabled all but a single integer/fp core on Bulldozer, as well as the competing processors. I also looked at constant frequency as well as turbo enabled speeds: 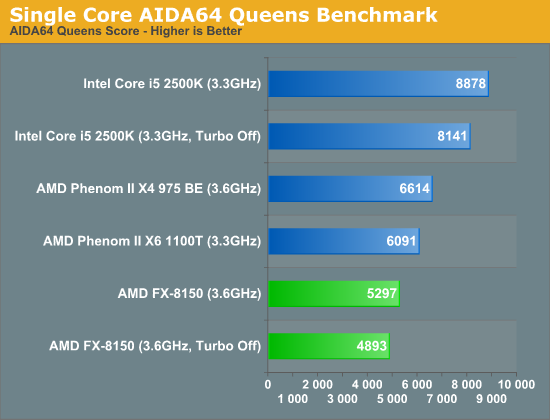 Unfortunately things don't look good. Even with turbo enabled, the 3.6GHz Bulldozer part needs another 25% higher frequency to equal a 3.6GHz Phenom II X4. Even a 3.3GHz Phenom II X6 does better here. Without being fully aware of the optimizations at work in AIDA64 I wouldn't put too much focus on Sandy Bridge's performance here, but Intel is widely known for focusing on branch prediction performance.

If we let the N-Queens benchmark scale to all available threads, the performance issues are easily masked by throwing more threads at the problem: 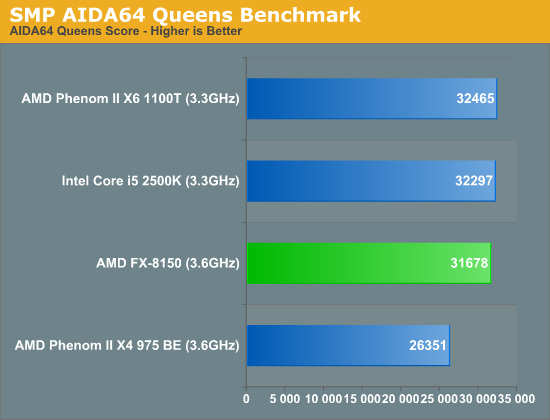 However it is quite clear that for single or lightly threaded operations that are branch heavy, Bulldozer will be in for a fight.