In and Around the Rosewill Thor v2

If there's one major difference I've noticed between the Rosewill Thor v2 and the last case I reviewed, the SilverStone FT02, it's that the Thor is freaking huge and remarkably tall. So large in fact that I'm honestly surprised it's not more than 30 pounds, though Rosewill likely saved some steel (along with weight and effort by the end user) by going with a plastic top and face.

Most end users probably aren't going to need six 5.25" external bays, but Rosewill had the extra space and must've figured they might as well use it. One of the faceplates for the bays can be used to convert a bay to a 3.5" external, and below the column of bays is the enormous 230mm intake fan. Unlike the other fans, this one glows with red LEDs (as does the Thor logo at the top when the system is powered on), though as I mentioned before there's a button recessed next to the intake fan that can be used to toggle the LEDs on and off. So if you'd rather your case not look like it's possessed, the option is there. 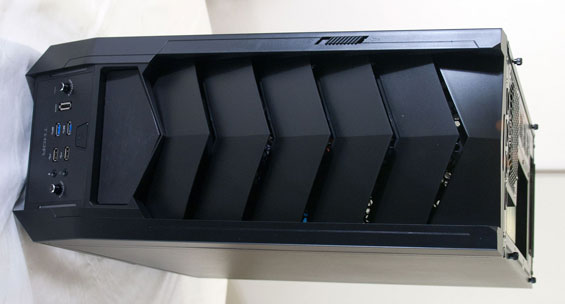 At the top is a very healthy port cluster featuring all the modern amenities, but unfortunately the USB 3.0 ports are routed through the back instead of using an internal motherboard header. Two USB 2.0, two USB 3.0, audio jacks, and even an eSATA port should handle the majority of the connectivity any end user could ask for. Where I do waffle is on the fan controller knobs, which felt loose in my original review unit along with the replacement Rosewill sent. You'll also note a recessed reset button, which I think is a nice touch and prevents the end user [Ed: or their little ones!] from accidentally hitting it. Behind the ports is a small nook for resting external drives or CDs, and then there's the unusual vent system.

As I mentioned before, being able to open and close the top vents of the Thor v2 would seem like a great idea if there were still at least some openings for the top exhaust fan to vent through, but there aren't. In future revisions I would just as soon eschew this part of the design entirely and replace it with something akin to the top panel of the SilverStone Raven RV03. 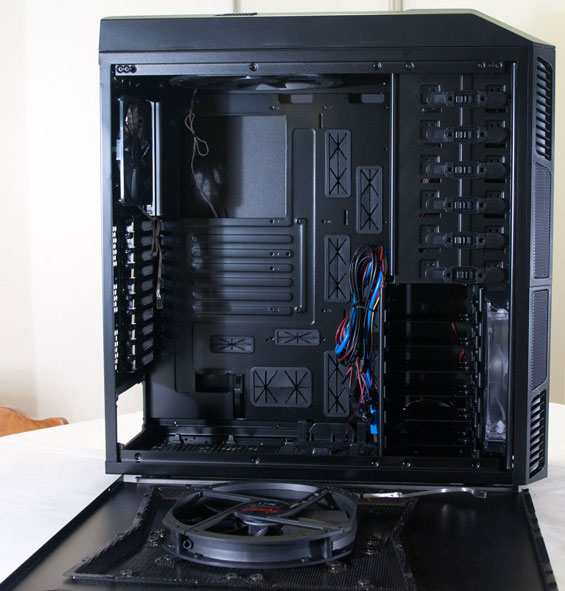 When I opened up the side of the Thor v2, I was treated with an interior that looks very familiar. Apart from just making it more spacious, Rosewill seems to have taken some cues from other designs like Corsair's cases. There's a very healthy ten expansion slots, but the whole thing feels intelligently laid out. The six 3.5"/2.5" drive trays all face behind the motherboard tray, there's a sizable cutout in the tray for installing cooling backplates, and then the top of the case is able to support a 240mm radiator for water-cooling. There are a series of rubber-lined cutouts in the motherboard tray for routing cables, too.

Last but not remotely least, the side panel of the Thor v2 features a huge 230mm intake fan that the craziest of end users can choose to replace with four 120mm fans, though in testing I can't imagine why they'd need to. There's also ventilation near the top for the processor cooling and it's liable to help the aforementioned 240mm radiator if that's a route you're inclined to take.

Thus far the Thor v2 is largely nothing but upshot, but I do have some concerns. While build quality is by no means terrible, the Thor v2 does feel a little bit chintzier than the other cases I've reviewed. The plastic used for the front feels cheap, and as you'll see in assembly, the rubber grommets that line the motherboard tray cutouts are held in place virtually entirely through the power of prayer. Rosewill addressed my concerns with my initial review unit by sending me a replacement, and the replacement does feel a bit more solid, but I think the build quality is still a fundamental weak point. If this case isn't going to be moved around much (and really, at this size it shouldn't be), I don't think it's necessarily horribly rickety or inclined to break; it just doesn't feel quite as solid as some of the other enclosures I've tested.