And now we get to the good stuff. The MT4GS camera is one of the more highly touted smartphone shooters in recent memory, with features like zero-shutter lag, an f/2.2 aperture, built-in HDR, panorama, 5-shot bursts, 1080p video recording, and practically everything else including the kitchen and bathroom sinks included. We decided to do a bit of digging to figure out what really was going on, and naturally, took a ton of pictures in the process. 125 sample images later, I here’s what we learned.

Let’s start with the sensor. A bit of monkeying around in the kernel boot logs gets us a couple of model numbers without too much trouble. The first is Sony’s IMX105PQ, a 1/3.2” 8.13MP CMOS sensor with backside illuminated 1.4µm pixels and support for 1080p30. This sensor initialized successfully; it’s the one in our test unit. The second model number we got was Samsung’s S5K3H2YX, a 1/3.2” 8MP sensor also with 1.4µm backside illumination, 1080p30 and 720p60 support. It’s a new sensor, launched at MWC earlier this year, and it’s the successor to the Sensation’s S5K3H1GX sensor. The OS looked for this sensor on boot, so it’s likely the second sensor option. One of my friends bought a Slide this week, and we’ve been led to believe that it has the Samsung sensor onboard. There are some differences in image quality between the two, but not too many. Think of it like the panel lottery that’s common in notebook displays, except with cameraphones. Either way, what you’re getting here is a high-end 8MP, backside illuminated sensor with full 1080p30 recording support, all features that are basically mandatory for any serious cameraphone these days. 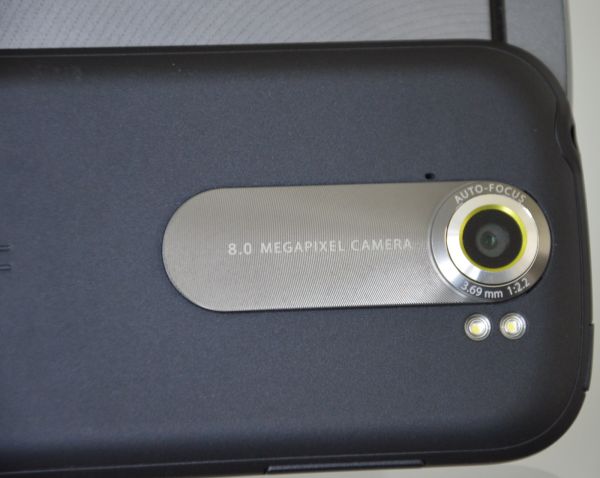 The Slide's optical system is F/2.2, which you can compare and contrast with the average smartphone’s F/2.8 (or worse) system. Aperture, in combination with shutter speed, controls how much light is exposed to the sensor. The lower the F/#, the larger the aperture and the higher the diameter of the lens opening. This gets you a greater depth of field and allows more light to reach the image sensor. In the case of the F/2.2, you’re looking at approximately 60% more light to the sensor when compared to F/2.8. Granted, the sensors we’re dealing with are tiny - the F/3.2” sensor size has a diagonal measurement of 5.68 millimeters and a crop factor of 7.61, but still, having a larger aperture does make a big difference.

Now here’s where stuff gets weird. This Zero Shutter Lag business is given with basically no substantiation on T-Mobile’s website, but their press release gives a bit of detail on what it is.

Zero Shutter lag: The myTouch 4G Slide is the only cameraphone on the market with Zero Shutter lag technology. When a customer opens the camera application, the camera begins recording in the background in a memory buffer. When you snap the camera button, rather than waiting for a mechanical shutter, it looks at the timestamp of when you pressed the button and pulls the photo from the cache. Thus, there is no delay between pressing that button and grabbing that perfect shot.

It turns out that this is a feature that Qualcomm showed off at Computex in June and was developed by Scalado, a Swedish company that specializes in mobile imaging solutions. Scalado’s Camera Framework is built into the MSM8x60 line of application processors, so it makes sense that this is one of the first implementations of the technology. More digging suggests that this entire thing is enabled by using Scalado’s SpeedTags JPEG optimization codec for 15 fps hi-res image decoding to push a stream of full-resolution JPEG images from the camera sensor to the processor and stored in a cyclic buffer. The stream of images is then displayed by the camera application as the on-screen image preview. SpeedTags data includes a timestamp on each image, so whenever the shutter mechanism is triggered, whether by the physical camera button or the onscreen button, it instantly pulls the image with that timestamp out of the stream. Until I figured out why, I was a bit disappointed in the relatively low framerate of the preview image, but it’s actually a rather impressive bit of technology.