One of the more notable changes in the 2011 MacBook Pro lineup is a completely different WiFi chipset and subsequent RF design. The previous 2010 MacBook Pro included 802.11a/b/g/n support using a BCM4322 which included full 2x2 MIMO support, meaning two spatial streams were supported. Bluetooth 3.0 was provided by a BCM2070, and the whole solution was simply a BCM954224HMB reference design. 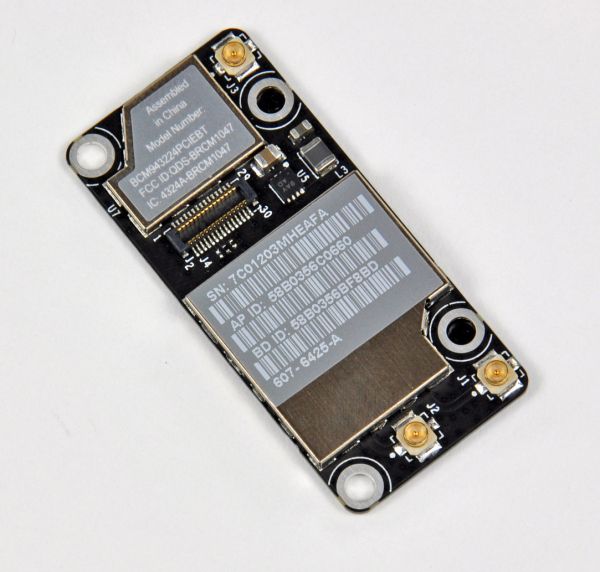 Back when the new Airport Extreme (Simultaneous Dual-Band II) launched, it included one little-hyped feature. One of the most notable improvements over the previous design was inclusion of a full 3x3 radio—again 3 spatial stream support. At the time, there were no Apple products that could actually use 3 spatial streams, and as a result many assumed the feature was completely locked down. 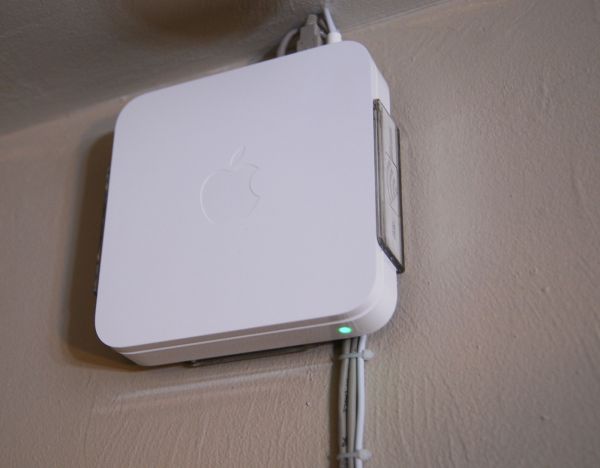 The Airport Extreme has had 3 spatial stream support for a long time to little fanfare. The Airport Extreme still only allows 20 MHz channels on 2.4 GHz spectrum. Other WiFi AP vendors ship firmware which will automaticaly selects 40 MHz channels on 2.4 GHz spectrum per WiFi Alliance rules, but Apple uniformly uses 20 MHz channels on 2.4 GHz. It's a design choice Apple made a while ago which still exists to this day – for two reasons. The first is that it prevents you from being, well, less than courteous and eating up to over 80% of spectrum on the already crowded 2.4 GHz ISM band with one AP. Apple's rationale for disabling 40 MHz channel support on the 2.4 GHz spectrum (for both clients and APs) is that Bluetooth needs lots of bandwidth to hop around on, and already a wide variety of Apple desktop and notebook products come by default with Bluetooth peripherals. Maintaining a good A2DP stereo stream for example requires considerable 2.4 GHz bandwidth. Instead, if you really want 40 MHz channels Apple recommends using 5 GHz, which Apple clients and Apple APs both allow to work with 40 MHz channels. 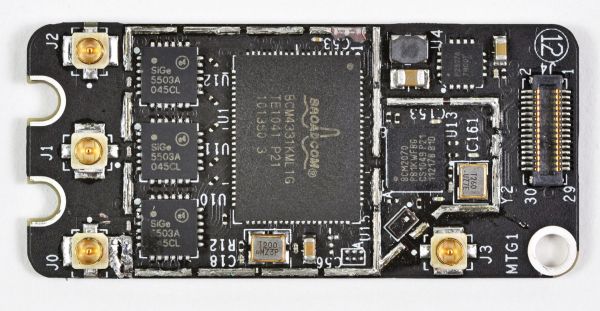 The 2011 MacBook Pro refresh is the first line of Apple products to bring 3x3 radios that can finally enable faster transfer rates and better performance at the edge of WiFi range. 3x3 MIMO support is starting to become relatively common in the PC notebook space, but this is the first for Apple. Inside the 2011 MacBook Pro is a BCM4331 and three clearly U.FL antenna connectors (on the left) for WiFi, as opposed to two in the previous design.

The fourth on the right is for Bluetooth, which remains 3.0 and provided by the same BCM2070 as previous models. Interestingly enough, though the Bluetooth controller is the same, the 2011 MacBook Pro includes newer firmware (37 vs 20), and software (2.4.3f1 vs 2.3.8f7). Hopefully at some point the older design will see a firmware update and bring whatever changes and improvements were made. Though the software versions are different, we couldn't detect any notable differences between the two in practice.

However, there's a dramatic improvement in both WiFi range and performance between the 2010 and 2011 refresh. With 400 ns guard intervals 40 MHz channels, 64-QAM modulation, each spatial stream adds n*150 Mbps. With 20 MHz channels, it's 72.2*n Mbps. For example, 1 spatial stream has a data rate of 150 Mbps, 2 has 300 Mbps, 3 has 450 Mbps, and so forth all the way up to 4 spatial streams and 600 Mbps as defined in the 802.11n specification. The reality of the matter is that what physical layer rate you'll see depends on the modulation and coding scheme and how many streams are going. You can look those up at any time by holding option and clicking the WiFi indicator, and looking them up in a table.

We tested a 15" 2011 MacBook Pro alongside a 15" 2010 MacBook pro connected to an Airport Extreme (Simultaneous Dual-Band II) running latest firmware. I originally suspected that 3 spatial stream support wasn't enabled, and that Apple would push a firmware update out right after their first 3 spatial stream products started shipping. Interestingly enough, it's always been there, enabled, this is just the first client I've gotten my hands on that does it. I'm not a huge fan of the Airport Extreme (I use a WRT54G-TM with Tomato and a WRT-600N with DD-WRT), but it's the only thing on hand with 3x3 MIMO. I tested in four different locations in my house—in my office, living room, kitchen, and outdoor patio. The base station is in my office mounted on the wall close to the ceiling, and those locations are subjectively ordered from best to worst.

To test, I initiated a large transfer over SMB (from a Windows Server 2008 R2 install with a 5 TB RAID5 array connected over gigabit ethernet) on each client, continually pinged AT, and at each location checked the reported transmit rate and RSSI. What we're reporting here is again the physical layer link. I'll show in a second that real-world transfers also improved, this just gives some perspective for what raw link rates are being negotiated at each location.

In most cases, RSSI is within the margin of error. RSSI is generally not something you can compare, but since both wireless chipsets are Broadcom and the numbers are so close, it seems they're reported the same way and probably just dBm. Just know that generally it doesn't work that way unless you're lucky. What's important, however is that the negotiated link speed is noticeably better in essentially all locations on the new 2011 MBP. Even when the extra antenna isn't being used for a spatial stream of its own, it's actively improving link quality and helping the new MBP negotiate higher physical layer speeds.

So how much of a difference does 450 Mbps 3x3 make over 300 Mbps 2x2? With both in the exact same spot in my office, I saw throughput of 98.1 Mbps on the 2010 MBP compared to 113 Mbps on the 2011 MBP. The modest 15% improvement over the previous generation's wireless chipset isn't dramatic, instead the dramatically improved range is. 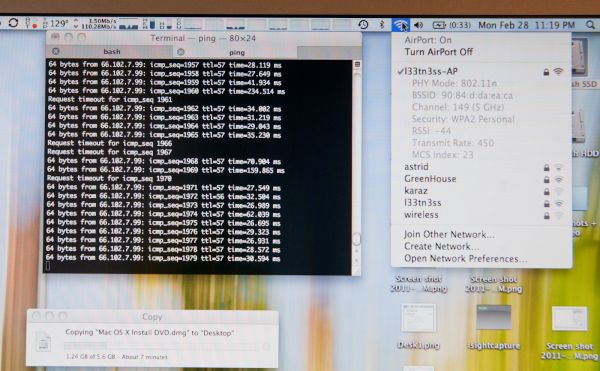 Subjectively, I found many more APs visible with the new MBP. I was able to cling onto my AP all the way out to the curb (just like smartphones) when connected on 2.4 GHz, something the old generation just couldn't do.

The only complaint I have about the new wireless chipset is that it seems to hunt around for what rate it wants negotiated. I saw a number of different MCS (modulation coding scheme) values with the 2011 MBP in the exact same place. Link rates from just below 300 Mbps all the way up to the expected 450. It seems to settle out at the expected 450 Mbps in the same room as the AP, it just takes a while, whereas other 2x2 stacks I've seen always lock onto 300 Mbps and stay there in the same room and position.