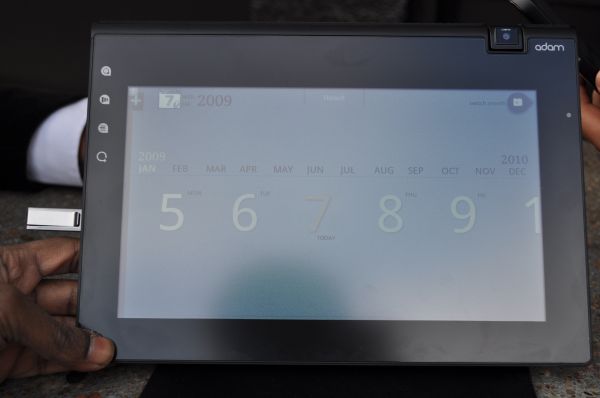 I’ll start off with one of my favorite tablets from the show, the Notion Ink Adam. Out of India, the Adam has been highly anticipated ever since Notion Ink’s coming out party during last year’s CES. I met with Notion Ink this year, and I got a chance to play with one of the first production Adams, this one being Rohan Shravan’s personal unit. Rohan is Notion Ink’s founder and CEO, and I was lucky to have him on hand to walk me through the ins and outs of the Adam. It’s a 10” Tegra 2-based tablet running Froyo, but it has a number of innovative touches, like the transreflective Pixel Qi display, the 185-degree rotating 3.2MP camera, the 1 watt speaker at each end, USB flash drive support, and a full-size HDMI port.

But the part I’m most excited about in all of this is Eden, Notion Ink’s very thorough reskinning of Android 2.2. It’s by far the most interesting Android skin I’ve used to date, in that it completely changes the way Android feels and behaves. The home screen is made up of a number of “panels”, which are independent on-screen windows of various applications, so you can have a view of your inbox, your calendar, an RSS feed, and more opened on the home screen. Overall, the UI is very vibrant and colourful, with smartly designed applications for email, calendar, weather, media playback, and other basic functions. The application launcher, which opens as a red ribbon across the screen, is a nice touch, as is the included scientific calculator. The two highlights, though, have to be the reworked browser and the excellent on-screen keyboard. The browser is built for multi-tab browsing, and switching between different tabs is quicker here than on any mobile device in recent memory. I didn’t get a chance to take any UI pictures because we were outdoors, so I’m going to post some of the screenshots from the Notion Ink blog.

In hand, the Adam is surprisingly good. The chassis is made of plastic and never lets you forget that, so it doesn’t have the premium feel that the iPad does, but there isn’t a lot of flex, and for a first design effort, it’s pretty exemplary. The rubber grip on the right side combined with a cylindrical edge makes the device very comfortable to grip, and Notion Ink has evenly distributed the weight to make it easier to hold. I do have to commend the fact that it’s all matte - the body, the display, everything. In this age of overglossing every surface you can (Samsung, Dell, I’m referring to you guys), it’s really refreshing to see someone have the guts to make a matte device. Less glare, less fingerprints, how could you disagree with that? The other great thing is that transreflective display. It’s monochromatic, but it’s absolutely great in the sun and makes for an awesome e-reader. In practice the UI is quick and pretty sleek, it’s one of the better Android tablet experiences on the market currently and probably will be until Honeycomb releases in a few months.

Notion Ink has started shipping out the first batch of Adams last week, after getting the final FCC approval. There’s only two options - the transreflective Pixel Qi display and the 3G modem, so there are four distinct models at launch. I’m hoping to get a review unit from Notion Ink in the next couple of weeks, but our first impressions show that they’ve definitely got one of the more innovative and promising new tablets on the market.