Subjective Overview of the N53JF

The N53JF is a nice looking laptop—some might even say it’s the most attractive of the midrange laptops we’ve recently reviewed—but aesthetics are highly personal. Where the XPS 15 had rounded corners and a slightly thicker chassis, the N53JF is more traditional. The large speaker bar up top may be too much, and stickers abound on the palm rest, but the brushed aluminum palm rest and lid are attractive. Compal’s NBLB2 is old school in appearance (i.e. not good in our opinion), and the Clevo is okay but feels a bit cheap. I’d say personally I like some of the design elements of the N53JF more than the other laptops, but I do prefer the backlit keyboard and solidity of the Dell XPS.

ASUS makes the same mistake we’ve lamented with so many other laptops: there are no glossy finishes except for the LCD and bezel. I understand the idea of coherency—i.e. keep the entire viewing area glossy—but you will routinely put fingerprints on the bezel when you open up the laptop. Dustin also disliked the webcam “shutter”, but I’m not so negative on the feature; it may break, since it’s just a plastic slider, but if you’re like me you’ll have the webcam in the off position 99% of the time anyway.

The most controversial design element is probably going to be the speaker bar across the top of the keyboard area. Simply put, it’s huge, and that might give you the impression that ASUS is using better than average speakers. Perhaps they are, but subjectively the sound didn’t impress me all that much. Audio is clear, but there’s a major emphasis on the highs, to the point where a lot of my music sounded scratchy—like there was static on the high range. This was present on CDs, MP3s, and lossless FLAC audio files, so it’s not just a problem with overly compressed music. The lack of a subwoofer also hurts relative to the XPS 15’s excellent sound, so in the end the audio is just okay. Cranking up the volume, the overpowering highs become even more so, and certain music and sounds would create some resonance and distortion above ~80% volume. You can see pictures in the gallery above showing the dissection of the N53JF that show the two speakers underneath the large grille; they look to be pretty typical 1” (or smaller) tweeters, making the aesthetics of the grille even more questionable. Frankly, I expected a lot more from speakers bearing the Bang & Olufsen badge. 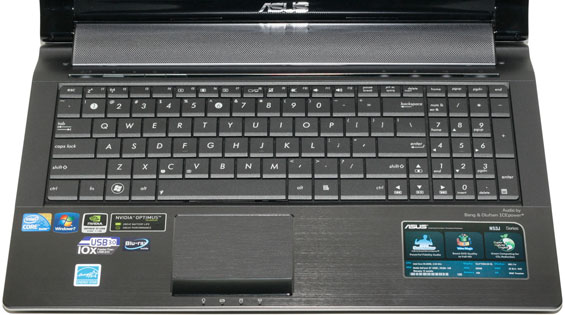 The keyboard is another “average” area. ASUS eschews the chiclet style that is used on so many other laptops for a change, but I’m not sure their flat keys are any better. There’s a fair amount of flex on the keyboard, no backlighting, and the number keypad has a half-sized “0” key that overlaps with the cursor keys. It’s certainly not my favorite keyboard ever, not by a long stretch, but it’s also not as bad as the Acer/Gateway floating islands. The palm rest and trackpad are decent sized and the latter works as well as other touchpads I’ve used, with support for all the latest multi-touch features. Again, ASUS uses a glossy rocker switch for the buttons, which is the wrong decision in our opinion, but it’s not so bad that we can’t live with it. Like I said, it’s simply an average layout.

The other item to discuss is the display, and here’s where things get a little confusing. Astra32 (and our display calibration utility) both report the N53JF LCD and the Dell XPS 15 1080p LCD as being an AU Optronics B156HW1 (B156HW01 v5 for the N53JF). While both are 15.6” 1080p displays, the backlighting and contrast are clearly better on the Dell panel—even without using any hardware, it’s immediately noticeable that the contrast in particular is nowhere near as good on the ASUS panel. Maximum brightness is also lower, so we’re not sure if AUO simply has different versions of the same panel where one model has a wide gamut and better contrast. The net result is that we like the 1080p resolution, but compared to the Compal, Clevo, and (no longer available) Dell 1080p offerings this LCD is definitely the low man on the totem pole. That still makes it a far better choice than any of the 768p displays we see everywhere else!

One other aspect of the design that bears mention is the access to the internals, which is actually another step back. A single smaller cover provides access to a couple of wire connections, while a larger panel hides the RAM and HDD slots. The problem is that the screws securing the larger panel are hidden beneath the rubber feet on the bottom of the notebook. If you never access the SO-DIMM slots and you don’t plan on upgrading to an SSD in the future, it’s not a big deal, but hiding screws on the bottom of a laptop in this manner is silly. We’re not talking about a laptop that’s designed for looks (i.e. MacBook’s unibody chassis), and there are plenty of other screws visible on the bottom, so hiding these and forcing users to remove and replace the feet (which will inevitably wear out the stickiness if you do this more than a couple times) is unnecessary. We went ahead and dismantled the laptop a bit more to show the internals, mostly because we had already removed the other 26 screws that hold the chassis together. The keyboard comes off relatively easily, and again I have to comment on just how flimsy this particular keyboard feels; please, add a stiff backplate on the keyboard next time ASUS.

Ultimately, what you get with the N53JF is a decent notebook that fails to surpass the competition in some key areas. ASUS uses a lesser LCD and the keyboard isn’t quite as good as we’d like; they make up for this by including a Blu-ray combo drive. On paper, we suspect they also spent some money to get the “improved” Bang & Olufsen speakers, but the result failed to impress. They’re not terrible, but if the speakers (and branding) added even $25 to the total cost, that money could have been put into getting a higher contrast LCD instead.