The Vision 3D is primarily built out of notebook components, and it is not possible for the average enthusiast to build such a system with off-the-shelf components. Of course, one might go in for a Clarkdale based HTPC with a GF104 discrete GPU solution for similar features right now. The rumoured GF108 based GT430 might even be a good GPU for a mini-ITX build. However, plug and play units like the Vision 3D (or the Dell Zino HD, for that matter) expand the appeal of HTPCs beyond the usual DIY consumers. In the rest of this section, we will analyze the components of the Vision 3D system in detail.

The motherboard used in the Vision 3D is very similar to the Core 100, except for the following points:

We had estimated the price of the motherboard and chipset to be around $140 for the Core 100. For the Vision 3D, the thermal design is substantially different (more on this in the next section), and the Fresco Logic chip is extra too. For the purpose of cost analysis, let us assume that a similar motherboard can be purchased for around $160. 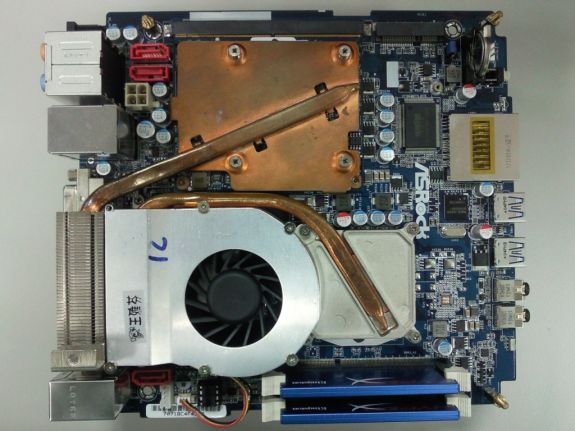 For the form factor and thermal design of the Core 100 HT-BD, only processors with a maximum TDP of 35W are supported. Also, most HTPCs do not require features like Turbo Boost, particularly when their performance exceeds what people have come to expect out of a particular form factor (talking about the Atom nettops) by a magnitude. Keeping in mind the cost of the processors and the nett cost of the system, ASRock has decided to go with the latest processor in the lowest end of the Arrandale spectrum, namely, the Core i3-370M. We feel that this is a very good choice, as the processor is powerful enought for most of today's demanding tasks, particularly from a HTPC perspective.

The Core i3-370M was released in Q3 2010, as an intermediate part between the introduction of the original Arrandale processors and the Sandy Bridge lineup next year. The only difference between the original Arrandale i3s and the new version is an unlocked multiplier. The i3-330M and i3-350M introduced in Q1 had maximum bus to core frequency ratios of 16 and 17 only. The i3-370M increases this to 18. The DMI link in the former chips are capable of 2.5 GTps, while the i3-370M's DMI link is capable of 4.8 GTps. The cache sizes are the same across the board, but the i3-370M has the highest default clock frequency of 2.4 GHz among the i3 mobile processors.

The (un)fortunate aspect of the Arrandale processor in the Vision 3D is the fact that the integrated GPU is completely disabled. There is no 'Optimus' support in this system. ASRock's official stance is that this was done because the HDMI outputs of the Intel IGP and the GT425M are unable to support seamless transition. Further, the Arrandale IGP is yet to support 3D, and it would go against the very essence of introducing the Vision 3D, if it were to be supported.

For the purpose of cost analysis, let us assume that the processor can be purchased for around $120. The exact price is unknown since it is available only to OEMs.

The unique capabilities of the Vision 3D are due to the nVidia GeForce GT425M MXM card attached to the processor. Based on the GF108 Fermi architecture, this mobile GPU enables a host of features in the Vision 3D such as DirectX 11, 3D Blu-Ray (MVC decode) playback acceleration, 3D Vision, HDMI 1.4a, HD audio bitstreaming and PhysX support. In the default configuration, the 96 CUDA cores are clocked with a graphics clock of 560 MHz and processor clock of 1120 MHz. The 128-bit DDR3 interface is clocked at 800 MHz, giving an effective memory bandwidth of 25.6 GBps. The MXM card in the Vision 3D comes with 1 GB of Hynix DDR3 SDRAM exclusively for use by the 425M. 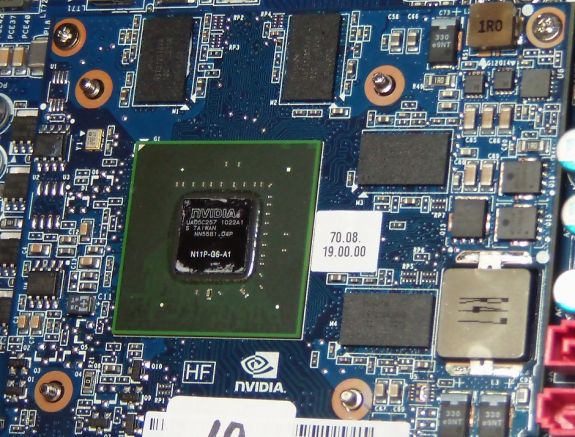 One of the most difficult things to estimate is the true cost of these MXM modules. While common sense indicates that the cost of this must not be more than $100 or so (a discrete GPU of much higher performance can be obtained for that cost), online searches revealed only one direct-to-consumer seller for these type of cards. MXM-Upgrade charges 250 Euros for a GTS 250M with 1 GB DDR3. We have no option but to estimate the price of the 425M MXM card at around $300, though we are fairly confident that the actual cost to ASRock is much much lower.

The DRAM configuration is similar to that of the Core 100. There is support for upto 8 GB of DRAM, but the Vision 3D ships with 4 GB, which is more than enough for HTPC purposes.

The memory can be purchased for around $100 online.

Unlike the Core 100 which shipped with a 5400 rpm drive, ASRock has decided to ship a faster 7200 rpm drive with their high end Vision 3D. This is bound to give the Vision 3D better OS boot times and also improved general performance. The Western Digital Scorpio Black 2.5" hard drive series is one of the well reviewed lineups in the industry, with desktop class performance and power requirements similar to the 5400 rpm drives. Unfortunately, this lineup doesn't have a 640 GB version yet. ASRock has decided to go with the maximum available capacity in this series, 500 GB. We can't fault ASRock for trying to strike the best possible balance between performance and hard drive capacity. 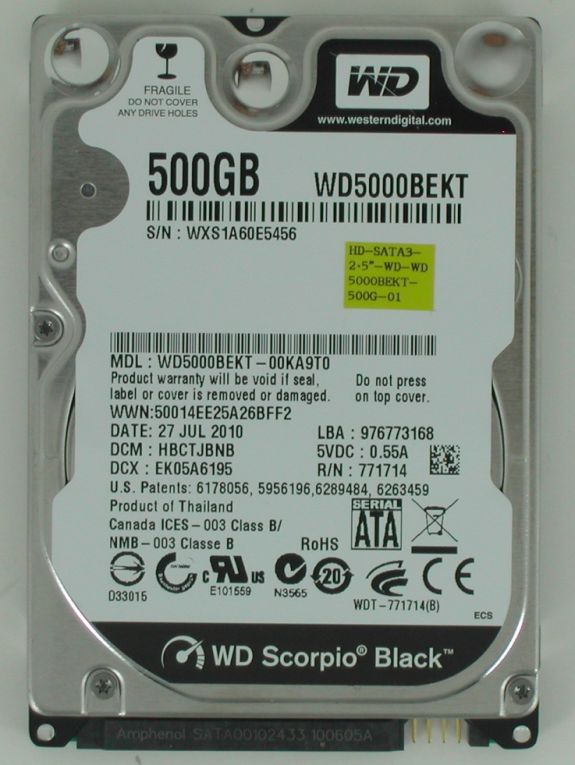 The Core 100 could accommodate a second 2.5" SSD or hard drive. Unfortunately, the space constraints seem to nullify that possibility in the Vision 3D. ASRock does supply SATA data and power cables, but it is unlikely that anyone would attempt to sandwich a drive between the ODD and the supplied HDD.

The 500 GB Scorpio Black is currently available for around $70.

The Vision 3D model ships with the Lite-On DL-4ETS Blu-Ray / DVD RW slot loading drive. Not much information can be found about this model online. However, similar new slot loading Blu-Ray drives meant for notebooks can be found on eBay for around $150. The tray loading drive in the Core 100 was one with which we weren't completely happy, and thankfully, ASRock has fixed this for us in the Vision 3D. 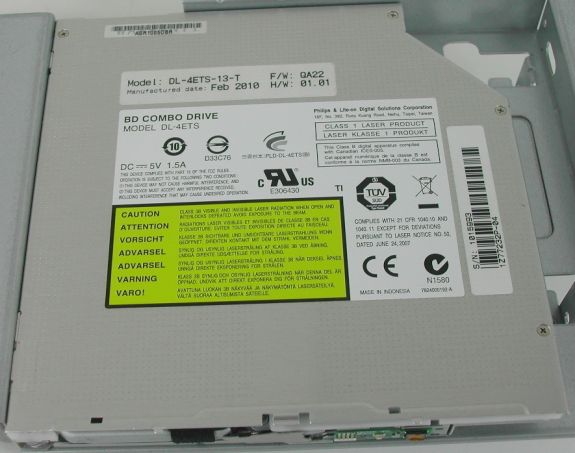 The chassis is obviously custom made for this motherboard. ASRock also throws in the SATA, power cables and screws for the optional 2nd hard drive (which users would find difficult to install), as well as a DVI-VGA adapter. Mini-ITX cases with PSUs of much higher rating (the unit comes with an external 90W adapter) can be had for around US $50. So, we estimate the cost of the chassis, power adapter and other similar accessories to be around the same. Note that the unit also ships with an IR based MCE remote. The build quality of the MCE remote bundled with the Vision 3D is much higher than the one which shipped with the Core 100. The batteries are also of the CR232 model, which should give them a much longer lifespan. The remote is also much nicer to look at. 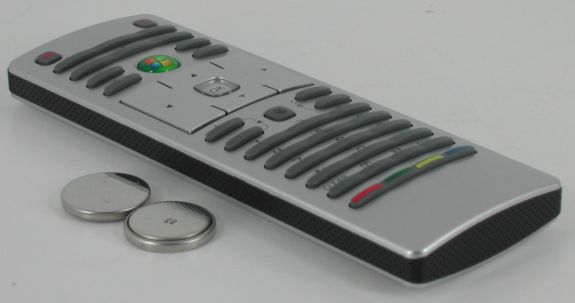 We estimate that the MCE remote and the IR receiver add around $40 to the cost of the Vision 3D.


This HTPC is supposed to go on sale soon around the $999. The DVD drive version is supposed to cost around $899. As soon as we prepared the above cost analysis, we realized that ASRock makes its margin fully on the MXM module. Since this is a component whose cost can't be estimated without being a business insider, we have to conclude that the Vision 3D is not a bad investment from the value viewpoint. Do note that the cost of the OS and keyboard / mouse have to be added on to this to get a sense of the true cost of the system.

The competition for the Vision 3D would come in the form of high end notebooks such as the Asus N73JQ. They cost a good $400 or so more, but come with the OS, screen and keyboard. While $999 appears quite high for this HTPC, cost analysis reveals that it is not such a bad deal. Of course, we were shocked at the price tag when we got to know about it. We would still like the price to be lower, but the fact is that it is not entirely unreasonable.

Update: ASRock pointed out that we haven't included the cost of the OEM version of Cyberlink PowerDVD and the 3DTV Play software. It looks like the MXM card is much cheaper than we estimated, considering that our estimated cost with these new additions is much  more than the price suggested by ASRock.