The first thing that comes to mind when looking at the images of the Biostar TP67XE board is one of space. The motherboard is seemingly devoid of a lot of clutter around the PCI slots.

With regard to the PCI slots, we often criticize Biostar of getting the configuration wrong - 4 PCIe followed by 2 PCI, for example on their TA890FXE.  This time, they’ve made an effort - a PCIe x16 (x8 in CrossFireX), followed by two PCIe x1, then a PCIe x8, and two PCI.  Thus if you fill both PCIe slots with dual slot graphics cards, there’s still a PCIe and a PCI available.  It’s a step in the right direction, sure, but there’s a better layout we would prefer (switch the first two, and also the PCIe x8 with the next PCI), meaning only the PCI card will have to deal with any direct heat from a dual GPU setup.  Aside from this, the livery is the distinct white and orange we’ve come to expect from Biostar.  Just don’t go mixing up the second PCIe with those PCI - which are both orange.  No matter how hard you try and jam a card into the wrong slot, something will end up breaking.
One thing of note on this board is the dual 8-pin 12V connectors near the socket.  In the past, only high end boards designed for extreme overclocking have two of these, to enable more juice to the processor.  Could Biostar be wanting to tackle the high-end overclocking giants of ASUS, Gigabyte, MSI and EVGA?  Biostar may need to introduce a Dual-BIOS type system as a step in the right direction, then.
Given that all the Sandy Bridge processors currently announced will have integrated graphics, you may remember from our Sandy Bridge overview that the P67 boards will lose integrated graphics capability in order to fund 2 x8 PCIe lanes.  That being said, if this is truly a motherboard aimed at the high end, almost everyone in that segment will be using at least one discrete GPU.
The rest of the board is what we have come to expect from the myriad of Sandy Bridge paraphernalia - two SATA 6Gb/s connectors with three SATA 3Gb/s, USB 3.0 supplied via the NEC controller, gigabit ethernet, eight USB 2.0 connectors in the back panel, another six available through onboard headers, dual channel DDR3, S/PDIF audio out, a sole PS/2 connector, firewire, an e-SATA connector, and a COM header.  In keeping with the overclockable theme, a two-digit error code display is also provided to debug and boot issues, as well as simple power and reset switches.  However, against that theme, is the sole non-CPU fan connector sitting at the bottom of the board. Keeping your RAM cool will thus require decent airflow, or fans connected directly to the power supply.
We don’t expect this board to set the world on fire compared to the high-end motherboards of other competitors, so in order to sell, Biostar will have to price this board very aggressively. 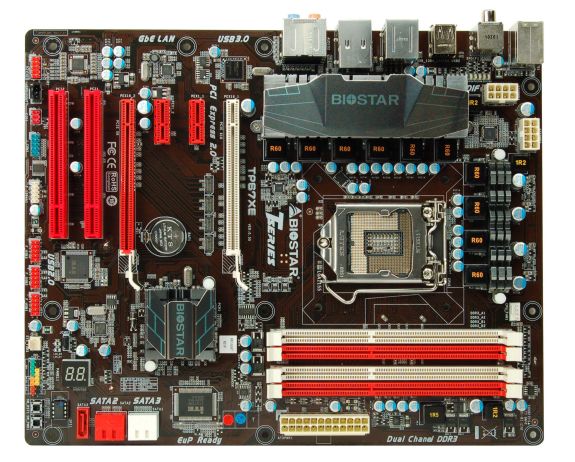