Apple calls the new Mac mini the world’s most energy-efficient desktop computer. I thought that might be a bit of a stretch but if you look at the numbers, they’re very convincing.

Now that 8.1W number is unrealistic for a notebook. The screen was disabled, battery removed, WiFi disconnected and no ethernet cables plugged in. If I run the 2010 Mac mini in a similar configuration (minus the display/battery part since, well, they don’t exist), the entire system consumes 7.5W at idle.

Connect to a WiFi network, plug in an Ethernet cable and you’re looking at 8W. I have not seen a modern desktop machine idle at lower power than the 2010 Mac mini.

Part of this has to do with Apple’s very efficient integrated PSU. Unlike the other two systems I mentioned here, the mini uses a custom, integrated 85W PSU specifically designed for the system’s load.

Part of it has to do with Apple’s component selection. The mini is built entirely out of notebook parts with a custom motherboard design devoid of anything unnecessary. I’ve even heard that Apple goes to great lengths to ensure the CPUs/GPUs/chipsets it gets are on the lower power portion of the yield curve for products like the mini or MacBook Air.

The third explanation for why Apple is able to make such a bold claim about the Mac mini’s power consumption has nothing to do with hardware at all. As we’ve shown in the past, Mac OS X tends to offer better battery life than Windows in situations where the system sees a lot of idle time. Reading web pages, typing a document, etc... all tend to expose this advantage. Under load however, the OS X power advantage disappears - we are after all dealing with the same components regardless of OS.

The idle battery life advantage comes from lower idle power, presumably through heavy OS and hardware optimization. While I measured 8W at idle under OS X, running Windows 7 (power saver mode) on the Mac mini resulted in a 12W idle power without any changes to the hardware. Granted I don’t have identical hardware by another manufacturer to confirm that this isn’t negligence on Apple’s part to optimize its firmware for Windows 7. However in the past we’ve shown that systems from Lenovo, despite having similar specifications to Apple notebooks deliver worse idle battery life. I believe it’s safe to assume that part of the reason Apple is able to make such a bold claim about the mini’s energy efficiency is because it is the only desktop that can be sold running Mac OS X.

This first chart shows power consumption during the boot process. From power on until you get a cursor at the desktop and the system’s power draw stabilizes for a while. The red line is Windows 7, the blue line is OS X: 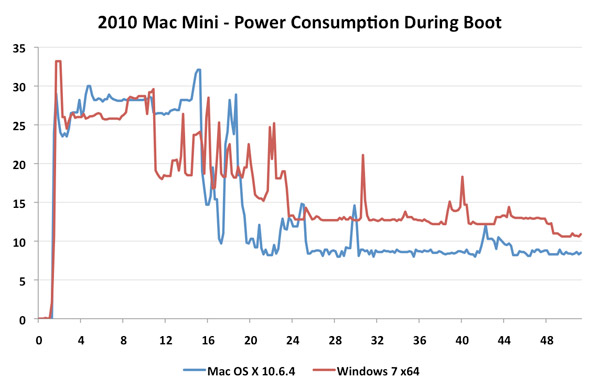 Peak power consumption is nearly identical between the two OSes during the boot process. However, OS X drops down to idle sooner (finishes booting quicker) and remains at a lower idle point than Windows 7. Both OSes experience blips of activity after we reach the desktop as additional services are started.

The next test is some basic web browsing using Chrome. I loaded the AnandTech front page, scrolled to an article, clicked on it, scrolled down to the comments and recorded system power consumption: 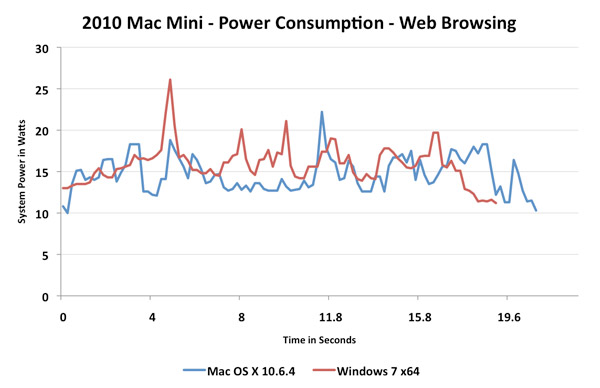 I tried to get both runs as close as possible to one another, but I am human. Even while browsing the web the CPU has ample time to go into lower power states. Total platform power dips lower under OS X and is lower overall.

Our final test shows a run of Cinebench R11.5. The legend is the same, red for Windows, blue for OS X, but this time the CPU is pegged at 100% for the duration of the test: 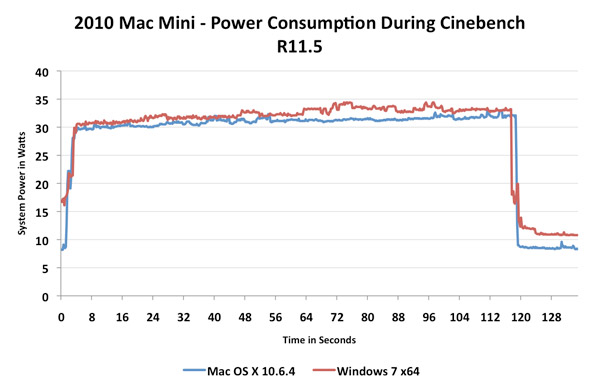 The two systems are nearly identical in terms of power consumption. OS X still offers a slight advantage that’s consistent but not pronounced. The render completes in approximately the same amount of time in both OSes, although Windows is a hair quicker. The mini under OS X scored 1.38 points vs. 1.39 under Windows 7.

Since there is a performance difference here, it could just be that Apple is optimizing for power consumption rather than peak performance in the OS itself. It’s difficult to analyze but it’s something I am seeing fairly consistently.