The Apple IIe was the first Apple I ever owned, and the Power Mac G5 was the first Mac I ever owned. While not my original Power Mac, I do still have an early 2005 model with a pair of 2.5GHz PowerPC 970FX processors, 4GB of DDR-400 memory and an ATI Radeon 9600 Pro video card (AGP 8X of course). Brand new, this system cost $2699 (not including the memory upgrade). Today you can find slower G5s on eBay or Craigslist for around $400, and faster dual dual-core models going for as much as $800. That’s an amazing resale value for a five year old computer based on a seven year old platform.

Like all PowerPC Macs, the G5 won’t run anything newer than OS X 10.5 (Leopard). I stopped using the G5 during 10.4 (Tiger) and hadn’t tried anything newer, until now. 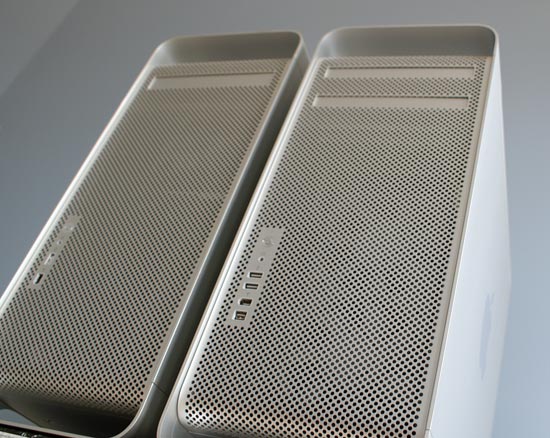 I was curious to see where the performance of a high end G5 fit in today’s Mac lineup. The PowerPC 970FX, a 90nm version of the original 970, was a very impressive architecture. Unlike the Pentium 4, the 970 was a very shallow (9 stage integer pipe) and wide microprocessor (5-way instruction dispatch). Running at up to 2.7GHz, there was enough IPC on the table for the Power Mac G5 to at least remain competitive with the Core 2 Duo in the new Mac mini.

I popped in a 600GB VelociRaptor and was quickly reminded that I was using a 5 year old machine. Despite being a SATA drive, the G5 was very unhappy with the new VelociRaptor. I couldn’t get Leopard to install to the drive without errors. I went back to something more 2005: a 150GB Raptor.

This time around Leopard installed just fine. I updated the OS to 10.5.8 and went about installing applications. While many modern OS X applications are now Intel-only, there are a surprising number that will run on PowerPC systems. Adobe Photoshop CS4 and Apple’s Aperture 2, both OS X benchmark favorites of mine, fully support the Power Mac G5. They installed without a hitch. 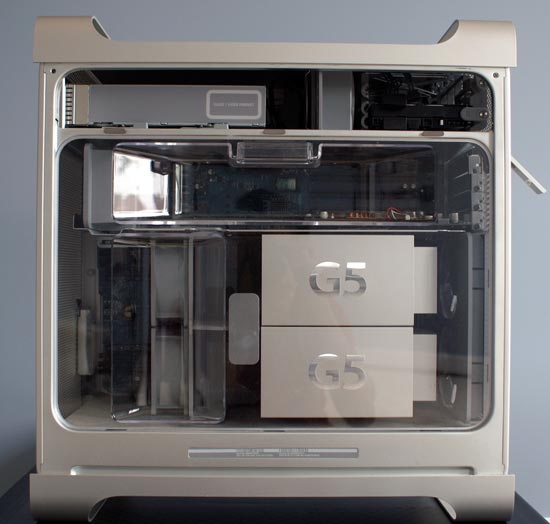 I tried to level the playing field as much as reasonably possible. I ripped out all but 2GB of memory from the G5 system, but left the 3.5” HDD in place. Most G5s would probably have a slower spinning, but potentially faster overall drive by now. And there’s no reason to assume that a G5 owner would have a 2.5” 5400RPM laptop drive in their system so that’s just going to have to be an inherent advantage over the mini.

The OS differences are obvious as well. Leopard is the best the G5 will run, while Snow Leopard comes standard with the 2010 Mac mini. Snow Leopard is faster so that’s another mini advantage.

This isn’t the most fair comparison, but it does give you an idea of how much of an upgrade you’d see as a G5 user if you wanted to replace your aging machine with the most affordable Mac:

Photoshop performance surprised me. If both systems were outfitted with 2GB of memory, the dual 2.5GHz G5 was 11% faster than the Mac mini. Moving to 4GB however opened up a bottleneck for the mini’s 2.40GHz Core 2 Duo (42.1 seconds) while memory size didn’t seem to have any impact on the G5 indicating that the system is CPU bound at this point.

My Aperture import test is a lot closer since we are more I/O bound. The G5 system only holds a 2% advantage over the 2010 Mac mini but it is at least competitive.

Cinebench and Quicktime video encoding are two areas where the mini really pulls ahead. A lot of this is going to boil down to what you can do with a good amount of compiler and software optimization, but given that all applications going forward are targeted at x86 architectures on the Mac I’d say that these results are valid and representative of at least a good portion of OS X applications.

Both single and multithreaded performance is around 47% faster on the Mac mini in Cinebench. The Quicktime encoding frame rates are double, but part of that is due to the difference in applications - Quicktime X is Snow Leopard only, while Leopard ships with Quicktime 7.

With performance varying from similar to significantly worse than the 2010 Mac mini, the real advantage the newer Macs have over the older G5 is power consumption:

At idle the Mac mini draws 8 watts. The dual Power Mac G5? 132 watts. Under load the gap shrinks to only 8.7x - 261W for the Power Mac vs. 30W for the Mac mini. It’s not a fair comparison since the two systems were built five years apart and targeted at different markets, but it does put things in perspective.

While the move from a G5 to a Mac mini might not always turn out to be a huge increase in performance, you’ll at least see a tremendous drop in power consumption.

As soon as I tweeted that I was installing Leopard on an old G5, AT reader bacalou responding asking if I’d post some of my experiences. I’d say overall I was surprised by how well Leopard ran on the Power Mac. While the machine is 5 years old, it was very quick for its time, not to mention that most modern Macs focus on energy efficiency rather than balls out performance.

Leopard is snappy on the machine, particularly after a clean install. I had problems with the Radeon 9600 Pro and/or ATI’s drivers causing video corruption, but it was fairly limited (I’d get a corrupt box behind my mouse cursor at times).

Application performance was also surprisingly good. Photoshop was quick and honestly, other than the noise I couldn’t really tell that I was using a PowerPC Mac.

The bigger problems I’d say are application and hardware compatibility. Steam and Starcraft 2 won’t work on PowerPC and that’s the trend going forward. A few years ago maintaining backwards compatibility was key, but these days PowerPC Macs are all but forgotten.

Would I toss Leopard on an aging Power Mac G5? Probably. Although selling the thing and using the money towards more modern, power efficient hardware is probably a better bet.