A number of differennt GTX 460 cards will be launching today. For the purpose of this article we are focusing on the reference design as it will be the most common, but there are also a number of vendor-customized designs that will be launching alongside the reference cards. For a complete writeup of the vendor cards we've received from EVGA, Asus, and Zotac, please see Part 2 of our launch day coverage.

As we discussed previously, NVIDIA will be launching 2 GTX 460 cards today: the GTX 460 1GB, and the GTX 460 768MB. The cards are virtually identical, with the latter being a GTX 460 without the 7th and 8th GDDR5 memory chips and the ROP count being adjusted accordingly. Both are otherwise built on the same PCB with the same components and same cooler.

Starting with the PCB, NVIDIA has mounted a GF104 GPU on the center of an 8.25” PCB. This is a notable change from NVIDIA compared to the GTX 200 series, as the reference design for every card in that series used the same 10.5” PCB and cooling apparatus, even on the lower-end cards such as the GTX 260. On densely packed cases 10.5” could be an issue, somewhat limiting the number of cases a GTX 260 could go in to. However at only 8.25” long for the GTX 460, it’s short enough that just about any case that can accept a double-wide card can accept the GTX 460. Furthermore this makes it the shortest reference card at its price point, as the bulk of Radeon HD 5830s (which do not have a reference design) are over 8.5” long. Even the Radeon HD 5850 with its virtually identical TDP of 151W is over an inch longer. 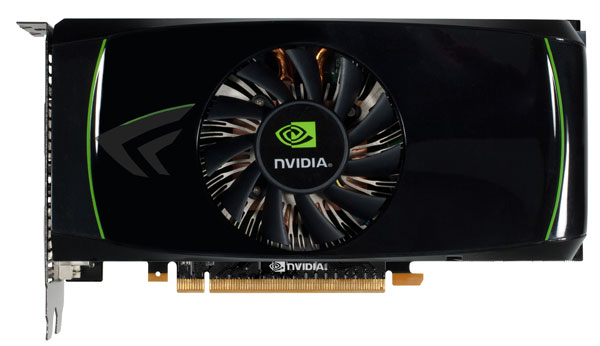 On our sample cards NVIDIA equipped the cards with 128MB 4GHz Samsung GDDR5 chips. With the cards’ memory only clocked at 3.6GHz effective this leave some room for overclocking, but as with GF100 the limit is NVIDIA’s memory controller rather than the chips. Any notable memory overclocks are just as likely to reduce performance due to error detection and retransmission as they are to improve performance.

Both the 1GB and 768MB GTX 460s require 2 6pin PCIe power plugs, which are mounted facing the rear of the card. As the ATX power limit for a card with 1 plug is 150W, this makes 2 plugs required on the 160W TDP 1GB card while on the 150W TDP 768MB card it’s both a holdover from the 1GB card and an insurance bet against the card drawing more power.

On the front of our reference cards is a port configuration identical to the reference GTX 480 and GTX 470: 2x DVI ports and a mini-HDMI port. NVIDIA went with this configuration as they believe that it’s more useful to have a mini-HDMI port than a mini-DP port due to HDMI-enabled monitors, and this hasn’t changed on the GTX 460. However like the GTX 480 and GTX 470, the GF104 GPU can only drive 2 of those 3 outputs at once. 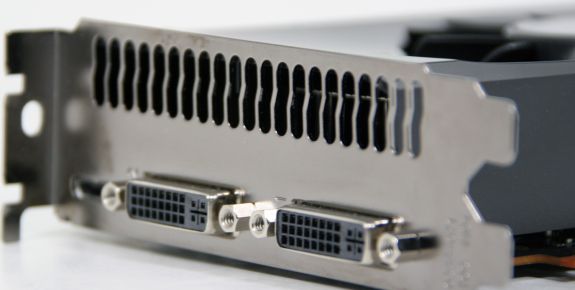 The GTX 460 is 3DVision Surround capable just as the other GTX 400 series cards, but also like those cards this requires 2 cards in SLI to driver the requisite number of monitors. This launch effectively lowers the entry price for 3D Vision surround down from around $520 (2x GTX 465) to $400 (2x GTX 460). However we would not suggest using the feature with 768MB cards, as the extra 256MB of RAM helps a great deal at the higher resolutions created by 3DVision Surround.

Moving beyond the PCB, we have the GTX 460’s cooler. Not unlike GF104’s revised architecture, this too caught us a bit off-guard. NVIDIA has for the longest time used a blower configuration on their mid-range and higher cards, with a rear mounted blower fully exhausting hot air outside of the case. GTX 460 deviates from this in a major way, replacing the blower with a center-mounted fan. The fan sits atop a dual-heatpipe heatsink, with the heatpipes leading to raised fins on either side of the card. In turn these heatpipes are attached to a copper base which makes contact with the heatspreader capped GPU. 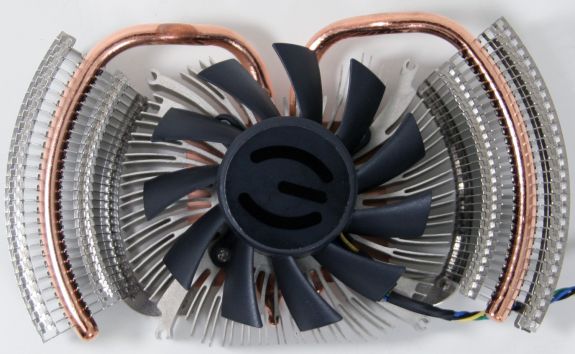 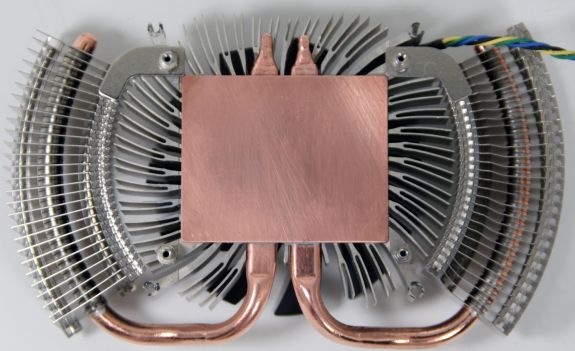 As a result of this design the GTX 460 is not fully exhausting, as a center fan will push air towards both ends of the card. The rear of the card is not sealed, but the card’s cover does have a plastic lip coming down roughly as far as the fan is tall. This in turn means the blades of the fan sit at the same height as the lip, blocking direct airflow out the back. With this design the card is still exhausting at least some air out of the rear of the card, but it shouldn’t be as much as a fully-open card such as our custom Asus GTX 460. Ultimately since this isn’t a fully exhausting design, it does mean that airflow within the case is a bigger issue, but we don’t believe it’s as important as it is for fully-open cards. On the positive side, this design is well suited for use with cases that have a fan behind the card (such as on our Thermaltake Spedo), as this allows a rear fan to blow fresh air directly in to the card.

One other quirk with this design is that the plastic cover for the card is not perfectly flat, but rather it’s slightly concave. We can only surmise that this is to give the card more room to draw in air in cramped situations, although in the case of our SLI setups the covered GTX 460 still ended up running much warmer. We should also note that this only applies for cards using the reference cooler – NVIDIA isn’t requiring partners to use the reference cooler, and a number of partners will be rolling out with custom coolers.

With a $199 MSRP and 150W TDP, the 768MB GTX 460 is also the first card to be of a suitable design for HTPC use. Although we don’t expect very many GTX 460s to be used for that (rather it would be for the unannounced GF106) NVIDIA is already putting plans in to motion for HTPC cards. The GTX 460 will offer full bitstreaming audio capabilities, something the GF100 GPU powering the other GTX 400 series cards could not do. This means that the GTX 460 will be able to bitstream DTS Master Audio and Dolby TrueHD along with the 8 channel LPCM audio capabilities supported by the previous GTX 400 series cards. This brings NVIDIA up to par with AMD, who has offered bitstreaming on the entire range of Radeon HD 5000 series cards.

Much like the launch of 3D Vision Surround however, this feature is late. It is not supported in the initial shipping drivers for the GTX 460 and will be made available at a later unknown date. We’ll be sure to test it along with the rest of the GTX 460’s HTPC capabilities once it’s available.

Finally, NVIDIA has been taking an interesting marketing angle with the GTX 460. In our briefings with NVIDIA, they have been heavily promoting the overclockability of these cards, and their partners have been hard at work binning cards to take advantage of this. As a result a number of cards being launched today will have some kind of factory overclock, and there should be further headroom for end-user overclocking. NVIDIA tells us that most – but not all – cards should be good for around 800MHz core. We’ll take a look at this in-depth in our overclocking section, but of the 6 cards we have, all of them surpassed this. This won’t be like the Radeon HD 5970 where a specific overclock is practically guaranteed, but if you can put up with a bit more heat and power consumption, the odds of 800MHz or more are looking very good.