Right out of the box, the iPhone 4's new 326 PPI, 960x640, 3.5" display is arguably the single most striking change the new iPhone brings. In a word, it's dazzling. Text and high res images look amazingly sharp on the iPhone 4’s retina display. It’s an improvement over the 800 x 480 AMOLED screens that have been shipping on most Android phones. But if you’re comparing it to an iPhone 3GS the difference is huge. 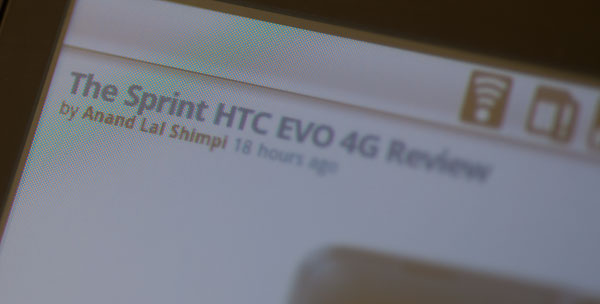 Text on the Google Nexus One

Text on the iPhone 4

The dot pitch is truly remarkable, so much so that Apple makes the claim that their display outresolves the human eye; its advertised ability to do so has earned it a new Apple tradename, "retina display." 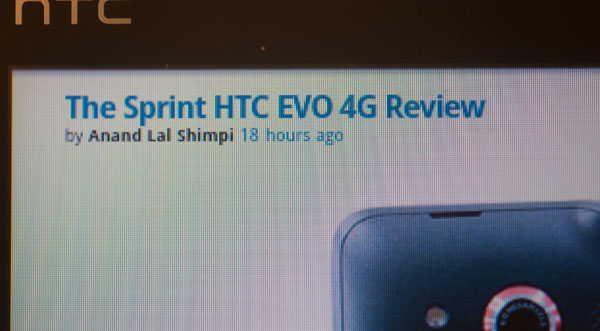 Text on the HTC EVO 4 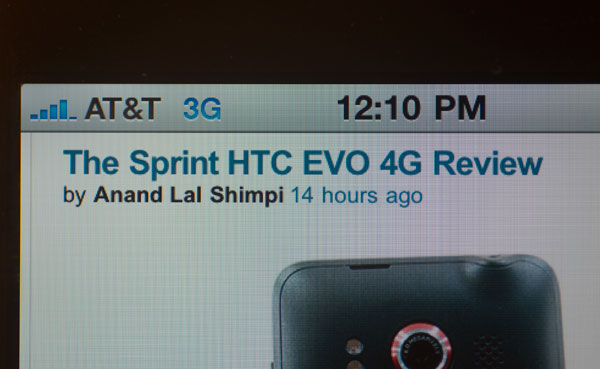 Text on the iPhone 4

AnandTech Logo on the EVO 4G

AnandTech Logo on the iPhone 4

Immediately after hearing Apple's claim that the Retina Display outresolves the human eye, I snapped into optics mode and crunched the numbers, and tweeted that the results were valid.

In the days that followed, there was considerable debate about the validity of Apple's claims. However, nearly all of the debate really just hinged on a debate over angular resolution of the human eye, and a little more over viewing distance. They're both entirely conventions.

As you've probably discovered by now, the human eye resolution can really only be characterized in angular subtense. Hold something closer to your eye, and you can see smaller features better (in theory), move it further away, and you can't make out small spatial details. The minimum angle visible with the human eye is the angle at which features (for the most common definition, a black and white square wave) stop being visible, and are indistinguishable from each other.

Most measures of visual acuity test with this implicitly - the Snellen eye chart's use of the capital "E" is literally a perfect example, which has given rise to a "tumbling E" eye chart. At twenty feet, the capital E subtends 5 minutes of arc, and conveniently has five half cycles of white to black (from top to bottom). So 20/20 implicitly implies an angular resolution of 1 arcminute (1/60 degrees). 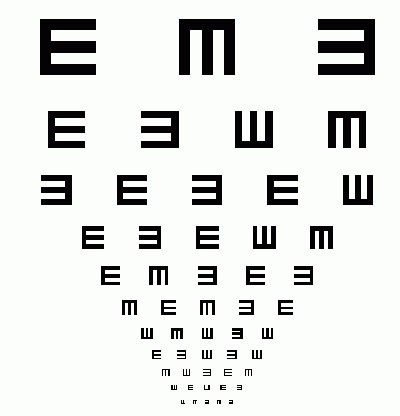 As an Optical Sciences and Engineering undergrad, I've had 1 arcminute drilled into my head more times than I can count as being the "normal" angular resolution of the human eye system. In practice, this is 20/20 vision, which is "normal," yet not perhaps the absolute maximum for human perfection. We can play games of course and argue that a small subset of the population has better than normal uncorrected vision, and thus an angular resolution of below 1 arcminute. I have above average uncorrected vision, which I've measured to be 20/15 on average, giving an angular resolution of approximately 0.75 arcminutes. Of course, the definitions stem from the spacing of cones in the fovea, the highest resolution part of the retina.

The other informational quantity needed to test the Retina Display claims is viewing distance. Again, there's a commonly agreed upon convention - standard viewing distance is considered to be 1 foot. This is another drilled into my brain number tossed around for comfortable viewing and reading. In practice, you can focus on objects much closer to your eye - this is called the near point and is often given as 10 inches, though as you get closer you increase strain aren't likely to keep it here. 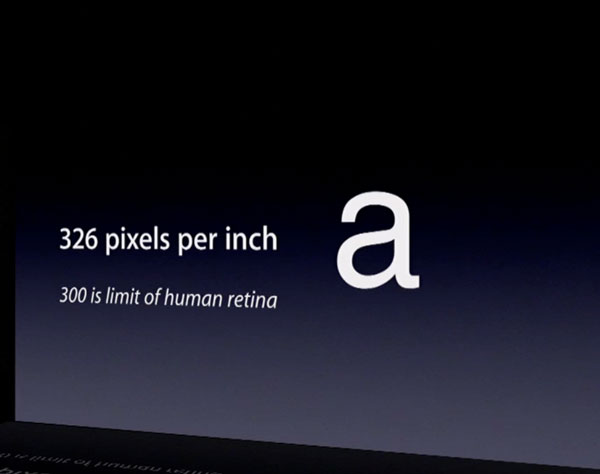 Maybe not exactly the limit, but close enough.

Of course, the real story is even more complicated. Remember how the definition comes with the implicit assumption that we're dealing with a square wave pattern from white to black? That's a factor too - the contrast of the two pixels. Lower the contrast, and the eye's ability to pick out features decreases even more. So far, everything we've talked about has been first order, and without aberrations. Toss in spherical and astigmatism, two aberrations common to the eye system, and eye performance drops way more.

The human eye system is actually pretty poor, and shockingly easy to outresolve. In fact, if you saw the image your eye forms on your retina, you'd likely be appalled; it's your brain that makes the system usable. But at the end of the day, Apple's claims that the display outresolves the human eye are good enough for us.