It's obvious how Apple settled on 960x640; it's four times the resolution of the previous iPhones. However, instead of decreasing text size, iOS 4 scales appropriately, and the size of everything remains the same. The result is that there are small details everywhere that pop out. Apple's icons on the home screen are the first that really pop out, and new iOS 4 optimized applications will bring that increased detail as developers add higher resolution artwork.

The display panel itself uses a subset of IPS (In Plane Switching) display technology called Fringe Field Switching (FFS). Where IPS switches the crystal polarization in the plane of the display with two opposing electrical substrates composed of semi opaque metals (which decreases transmission and viewing angles), FFS uses considerably less metal by arranging the electrodes in a comb like structure. 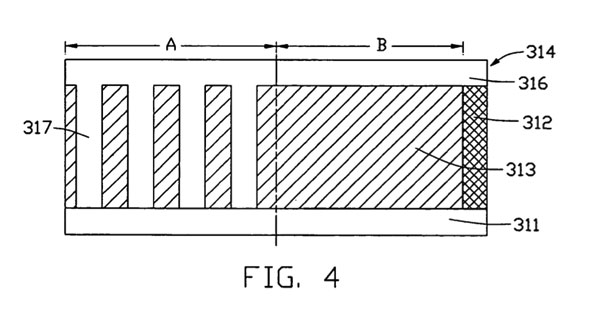 See that - it almost looks like a comb. Or an impulse train. Or Dirac comb. So many combs.

The result is that there's considerably less metal in back and in front of the pixel, resulting in much higher transmission of light through the display, and higher brightness for a given backlight level. Using FFS to drive pixel switching is critical here because of the high dot pitch in the iPhone 4's display.

The other interesting difference between iPhone 4's retina display and previous displays is that the digitizer is in optical contact with the display itself. There's no longer an air gap, and as a result, no longer any opportunity for dust to gradually work its way inbetween. Over time, I've noticed a few dust specks creep in on my 3GS, it does happen. The digitizer and display panel are essentially laminated together. The added benefit is that fewer material interfaces results in fewer internal reflections - think the "super" in Super AMOLED but applied to TFT. That's what Apple has done here.

Apple is using Corning's Gorilla glass which touts hugely increased scratch resistance and robustness. Both the front and back of the iPhone 4 are that same type of glass. I've noticed a few superficial scratches (called sleeks) that have appeared on the back, but really the true test will be how the phone looks after 6 months in the pocket. It's interesting that the iPhone capacity markings have disappeared from the back of the phone - no doubt this was done so Apple could make one part and one part only for each color.

The rest of the details are in the specifications. Apple advertises increased brightness of 500 nits and a contrast ratio of 800:1. We measured, and our iPhone 4 exceeded specs at 571 nits and just under 1000:1 contrast ratio. 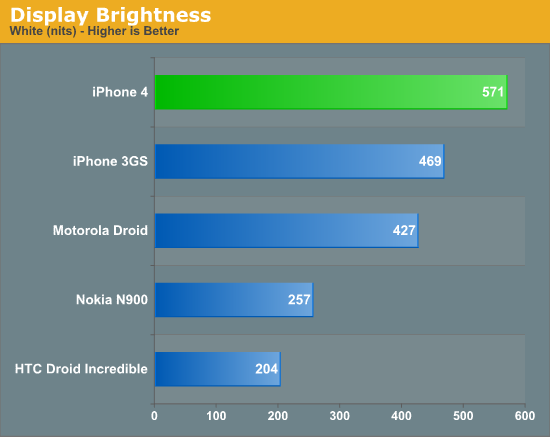 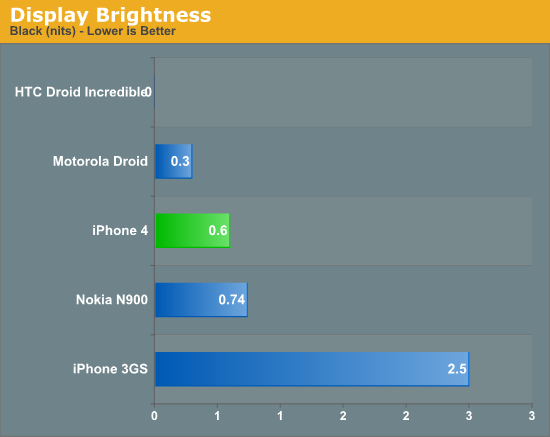 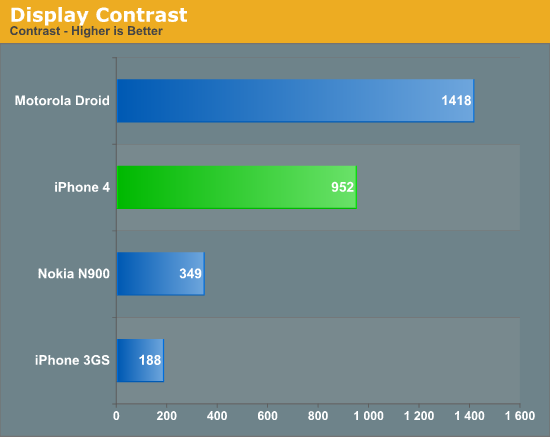 Note that the HTC EVO 4G is missing as Anand has it, but it's on its way to me. As soon as I get it, I'll measure display brightness, black point, and contrast and update these results. In addition, the HTC Droid Incredible (and thus Nexus One) contrast is effectively infinity by the way we calculate, due to pixels being completely turned off in the black state. In addition, I'm led to believe that the AMOLED's PenTile grid throws off our numbers when measuring brightness. I've run and rerun this test, it keeps coming up that way.

Next to the iPhone 4, the 3GS display really shows its age. It leaks light when displaying black, with an absurdly high black point of nearly 3 nits. Just looking at the lock screen on the iPhone 4 next to the 3GS it's readily apparent how much better blacks are. iPhone 4 easily bests the 3GS but still isn't quite as contrasty as the Incredible or Nexus One AMOLED displays, or the IPS in the Motorola Droid. You do get higher resolution and brightness, however, but nothing is free.

Going from the iPhone 4's display back to the 3GS is pretty painful, but going back to even relatively high dot pitch displays on the desktop is painful as well. Even on the "high resolution" MacBook Pro with 1680x1050 display, displaying an iPhone 4 screenshot at native resolution uses up 91% of the height. If there's one thing I hope the iPhone 4 display does, it's generate demand for 300 PPI level desktop displays - the era of 110 PPI displays being the norm needs to end now.