Things have changed since then. AMD hasn’t been getting quite the yield they were hoping for from TSMC’s 40nm process. Meanwhile a lack of pricing competition from NVIDIA has lead everyone in the chain to do some profit-taking that rarely gets to occur. The 5850 is now a $300 card, and the 5770 hovers between $160 and $170. That pricing gap that was $100 has become $130-$140. AMD has a hole.

Today they’re going to try to plug that hole with the Radeon HD 5830, the third and lowest member of the Cypress/5800 family.

Much like the Radeon HD 4830 before it, the 5830 is a dual-purpose card. On the one hand it’s a card to fill a perceived gap in their product line, and on the other hand it’s an outlet for less-than-perfect Cypress chips. Particularly when yields could be better, AMD wants to take every chip they can and do something with it. The 5850 line sucks up chips that can’t meet the 5870’s clock targets and/or have a 1-2 defective SIMDs, but until now AMD hasn’t had a place to put a Cypress chip with further defects. With the 5830, they now have a place for those chips.

The 5830 will be using a more heavily cut down Cypress. Compared to the 5850 AMD is disabling another 4 SIMDs, giving us a total of 6 disabled SIMDs and 14 remaining active SIMDs. Furthermore the ROPs are also taking a shave, with half of the ROPs (16) being disabled. Since Cypress has 4 ROPs per memory controller, AMD is able to disable 2 of them in each cluster without disabling memory controllers, so the 5830 maintains all 8 memory controllers and a 256-bit bus. 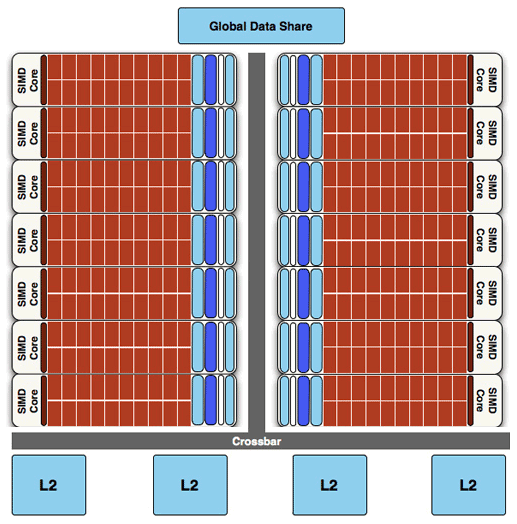 The clockspeeds on the 5830 will be 800MHz for the core clock, and 1GHz (4GHz effective) for the memory clock. AMD tells us that the higher core clock is to help compensate for the ROP loss, while the memory clock is unchanged from the 5850. It’s worth noting that the 5830’s clock speeds have clearly been in flux for some time, as the sample cards AMD shipped out to the press came with a BIOS that ran the card at 800MHz/1.15GHz, with AMD giving us a BIOS update to put the card at the right clocks once it arrived.

Overall the 5830 has the same memory bandwidth as the 5850, while in terms of core performance it has better than 5850 performance along the fixed function pipeline (due to the higher core clock), 85% of the 5850’s performance in shader/computation/texturing activities, and 55% of the 5850’s pixel fillrate and Z/stencil performance due to the disabled ROPs. In a lot of ways this makes the card half of a 5850 and half of a 5770 – the latter has around 75% of the 5830’s shader performance and the same 16 ROPs, albeit ones that are actually clocked higher than the 5830 and giving the 5770 a slightly higher pixel fillrate.

Given the 175W load power, it shouldn’t come as a surprise that AMD and its partners are doing some recycling on board designs. The launch 5830s will be using the 5870’s board due to the similar power usage of the two cards. This is something that AMD says may change in the future if vendors want to do their own boards.

However while the 5870’s board is being used here, the 5870’s shrouded cooler is out. In fact any kind of reference design is out as AMD isn’t doing one. Instead this is going to be an AIB launch, so each vendor is going to be doing a custom design which at this point would entail a 5870 board with a custom cooler. Since the review samples that went out were 5870 cards with the appropriate functional units disabled on the GPU we don’t have any first-hand cards to show you, but AMD did send along a collection of photos from their vendors, showing how each vendor is equipping their 5830. The lack of a reference design for the 5830 also means that you can expect some significant variation in what the thermal and noise characteristics of the shipping cards are, as some of these coolers are significantly different. 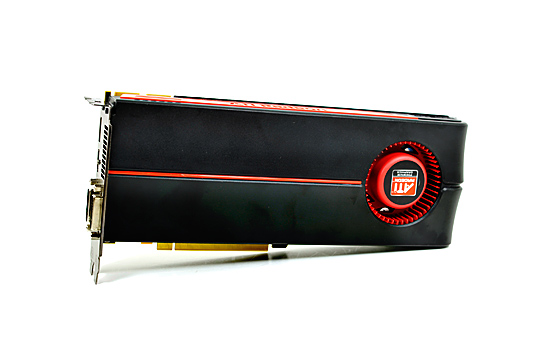 Update: It looks like AMD's partners have been able to come through and make this a hard launch. PowerColor and Sapphire cards have started showing up at Newegg. So we're very happy to report that this didn't turn out to be a paper launch after all. Do note however that the bulk of the cards are still not expected until next week.

With that out of the way, it’s time for the bad news: this is more or less a paper launch. The chips are done (AMD has practically been stockpiling them since August) but AMD has decided to jump the gun on this announcement so that they can announce the 5830 before CeBit next week, where they believe the launch would get lost among the myriads of other products that will be launched at that time.

At this point the production of the final boards is running a week later than the launch itself, which AMD is attributing to the fact that their partner’s factories were shut down earlier this month for the Chinese New Year. Two of AMD’s partners are hoping to have cards to e-tailers on time for this launch, but as of half a day before the launch no one is sure whether they’ll make it. Realistically you’re looking at the middle of next week before the cards are widely available.

We’re not amused by any of this, and we’ve told AMD as such. Paper launches were supposed to be something long-gone, and while this isn’t nearly as bad as what we’ve seen in previous years where products were paper launched solely to discourage consumers from buying a competitors product (there isn’t an NVIDIA product to counter at this point), this is still a paper launch, and there’s nothing good about a paper launch. This is a very bad habit to get in to.

And while we’re on the subject of supplies, we asked AMD what the continuing supply of the 5830 would be given that it’s a product of die harvesting, and the supply of its precursor the 4830 thinned out after some time. AMD tells us that they expect to be able to produce the 5830 in similar quantities as the 5850, which should give you an idea in relative terms of how many Cypress chips are coming back with 1-2 defective SIMDs or are missing clock targets, versus the number of chips coming back with 3-6 defective SIMDs or a defective ROP.

Finally there’s the second piece of bad news: the price. AMD is estimating $240 at launch for these cards, and we’ve seen that the price on the 5000 series can be quite variable. In terms of performance the 5830 is closer to what would be a Radeon HD 4880 with DX11, so you’re looking at a card that is going to underperform the 4890 and still cost at least $40 more. Of course at this point you can’t buy a 4890 (or a GTX 275) so AMD isn’t facing close competition at this performance level, but based on the historical pricing of the 4890 we strongly believe that $200 is the sweet spot for the 5830 right now.