While we were being briefed about the 5830, AMD also used the opportunity to tell us about the 5870 Eyefinity 6 Edition. You may better know this card as Trillian, a card that AMD was showing off (but not naming) all the way back at their 5800 series launch event in September. The 5870E6 is the 6 port mini-DisplayPort card that AMD was using to drive their 6 monitor and 24 monitor setups during the event.

AMD is finally ready to launch the card (and we’re assuming the 6 display Samsung mega-monitor is done too) which is why AMD is announcing it today. We have the complete specs of the card, but AMD is not quite ready to discuss its performance so we have yet to receive a sample card nor can we talk about its expected performance until a later date.

In a nutshell, the 5870E6 is a 2GB version of the 5870 equipped with 6 mini-DisplayPorts for its output. The core and memory clocks are the same as the regular 5870, while the extra RAM is to cover the larger framebuffer that would be required for such a large surface (6 1080P monitors would be 12.5MP). AMD has to equip the card with 16 GDDR5 chips in 16bit mode (as opposed to 8 chips in 32bit mode) to get 2GB of memory, so the power usage of the card will be 228W under load, and 34W idle. This means it will take a 6pin PCIe power plug and an 8pin power plug to drive the card, the only 5800 series card to have such a requirement.

AMD will once again be using the 5800/5900 series trademark shrouded cooler, this time with a full vent along the second slot to deal with the additional heat from the extra GDDR5 chips. At this point we don’t know how long the card will be, although we wouldn’t be surprised if it ended up being longer to fit the extra GDDR5 chips and power circuitry.

In order to drive adoption and to make things a bit easier for buyers, AMD will be having their partners include a number of dongles with the card so that no one is caught completely off guard by the exclusive use of mini-DP. The 5870E6 will come with 2 mini-DP to DP dongles, 2 mini-DP to single-link DVI dongles, and a single mini-DP to HDMI dongle. This will give the 5870E6 a similar degree of output flexibility as the 5870, even though it’s composed entirely of mini-DP ports. 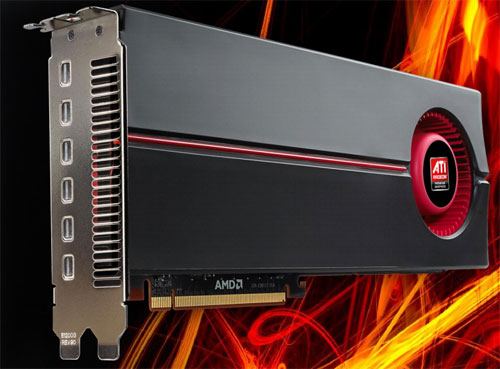 Since this is still being driven by Cypress, the clock source limitation has not changed. Cypress only has 2 clock sources for DVI-type displays, so the 5870E6 can only drive up to 2 DVI/HDMI displays using passive adapters. Furthermore if you want to drive a 2560 display or a 120Hz 1920 display, you’re going to need active adapters regardless of clock sources. So if you’re thinking of buying this as a 2GB 5870 to drive your 2560 DVI monitor, you’re still going to be shelling out another $100 for an active adapter. Even with the dongles, it’s clear that this card really is meant to be paired with DP/mini-DP monitors for the long-run.

As for pricing information, AMD has not announced a final price for the card. But since the regular 5870 is already at $400 it’s safe to tell you that this card will be in excess of $400.

Finally, we’re left wondering whether this card is a bit ahead of its time. Eyefinity is certainly ready (particularly with the Catalyst 10.3 driver additions that will be coming) but AMD’s current power situation means that they can either offer a 2GB 5870 or a 2GB (1GB effective) 5970, but not a 4GB (2GB effective) 5970. Based on our reviews of the 5870 and 5970 we’re not convinced that a 5870 is fast enough to drive 6 monitors and run games at a high level of detail at the same time, and at the same time more memory would seem to be critical for the frame buffer size that would result from such a setup. With Crossfire Eyefinity fully working as of the Catalyst 10.2 drivers, we suspect anyone serious about a 6 monitor setup is going to want to go for a pair of these cards in Crossfire mode so that they have the rendering performance to drive such a high resolution display. It would be costly (>$800) but then again so would a 6 monitor setup.

We’ll have more on the 5870 Eyefinity 6 Edition once it launches.