Last month, we discussed AMD’s announcement of the ATI Mobility Radeon 5000 Series, the first DX11 capable mobile GPUs. On paper, the lineup looks very capable, but we had a few concerns with the announcement. The first question is one of hardware availability: we know ATI has the GPUs available, but we didn’t know when manufacturers would start shipping actual laptops using the GPUs—or which GPUs they would use. The other more pressing concern is one of driver support. The best graphics hardware on the planet will do you no good if your drivers aren’t up to snuff, and while ATI’s desktop drivers have come a long way we haven’t had very good experience with getting official drivers for mobile parts.

Before we get to the latest announcement, it’s worth noting that ATI is no stranger to providing updated mobile drivers. Six years ago, ATI began releasing drivers on their website that could work with any ATI-equipped laptop. The only problem was that the program was opt-in, so the laptop manufacturers needed to agree to participate. For whatever reason, OEM buy-in never took off, so the vast majority of AMD-equipped laptops during the past six years have only received sporadic driver updates. On a side note, yes, we know it was possible to hack the desktop drivers in order to install them on ATI laptops, but hacked drivers generally disable hotkeys and power saving features outright, and performance isn’t always as high as official drivers. Getting drivers to install is only half the battle; making them work is another matter.

NVIDIA launched a similar mobile driver program in 2008 called Verde, with the goal of providing quarterly driver updates to all supported laptops. Again, the program is opt-in, but NVIDIA has managed to get far more support for their Verde drivers. We’ve covered NVIDIA’s mobile drivers quite a bit during the past year, including the unprecedented accomplishment of providing Windows 7 drivers for all of their recent (8000 series and newer) mobile and desktop drivers on the same day. Since the Win7 release, however, NVIDIA has returned to their quarterly driver updates. AMD informed us that with NVIDIA’s success at the Verde program, they decided it was time to reevaluate their program and make it better.

Today, AMD looks to change what we can expect from their mobile driver programs in some fundamental ways. They're launching a new mobile driver program, but there are some major differences between the AMD program and NVIDIA’s program. First and perhaps more important, the new AMD program will be opt-out rather than opt-in. Sadly, many OEMs simply can’t be bothered with agreeing to opt in to driver programs like these—they like having control over driver updates, most likely, but sometimes they’re just too busy to be bothered. Going opt-out means more laptops will be supported by the AMD drivers, since a manufacturer will have to request to not be included. The second difference is only slightly less important: AMD is committed to providing monthly driver updates for mobile GPUs. Quarterly driver updates is good, but there’s no question that getting a monthly driver update will take care of all but the most demanding users. Note that the new driver program will only cover Windows Vista and 7, while XP will remain on the old opt-in model—but since most modern laptops don’t use XP, this isn’t a serious concern. 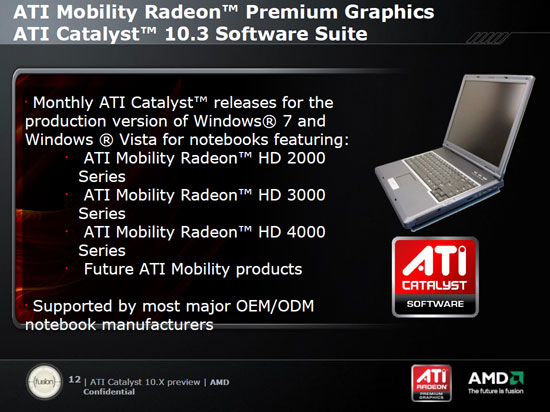 As far as the drivers are concerned, AMD/ATI informs us that the same basic driver will be available for both desktops and mobile parts, but the mobile drivers will include some extras focused on mobility features. Power saving will be more important on laptops, obviously, but the mobile drivers also need to include all of the hooks to work with laptop hotkeys like brightness adjustment, external display toggle, etc. The current plan is to roll all of the drivers out in a single package, so we expect the new Catalyst drivers to get a bit larger but they'll cover even more products. All ATI Mobility Radeon 2000, 3000, and 4000 parts should be supported, unless a manufacturer chooses to opt out of the program. (We would expect this to occur primarily with business focused laptops, i.e. the Dell Vostro line, where manufacturers and IT departments like to have more control over what drivers get installed.) “Future ATI Mobility products” will also be included, which should mean the latest 5000 series as well as future hardware.

The official launch of AMD’s new mobile drivers will begin with the public release of Catalyst 10.3. We won’t know for sure until March how the actual roll-out works, but at present we don't see any reason for concern. AMD has been providing updated drivers at the request of OEMs for a long time, so now they're just doing that without the request part. We do have pre-release 10.3 drivers for testing, but unfortunately we don’t have any current mobile ATI hardware to test. We installed the drivers on an older laptop with HD 3670 drivers and found they worked without any problems, including Blu-ray support, so that’s a good sign. We expect to receive some notebooks with HD 5000 GPUs shortly, so we’ll test the public drivers in the future as applicable. Naturally, the other new features for the Catalyst drivers will carry over to the mobile side, so CrossFire profiles in a separate XML file will be supported (i.e. on the Alienware M17x and ASUS W90 CrossFire notebooks).

There remain a few things we want to discuss regarding notebook drivers and platforms. First, NVIDIA recently launched their Optimus platform, which is the best implementation of switchable graphics we’ve tested to date. ATI supports switchable graphics as well, but the technology is more akin to NVIDIA’s gen2 technology: hardware muxes with a software switch, screen blanking, programs that can cause blocking, etc. The drawbacks of such an approach are the same for AMD as they are for NVIDIA: increased motherboard complexity, signaling issues, validation and testing all yield a more expensive product. The other problem is that you need drivers for both the IGP and discrete GPU in a single package as far as we’re aware, so we’re not sure how ATI’s updated mobile drivers will address this concern—we’ll look into it more when we get a laptop with ATI switchable graphics. (Of course, Optimus does have a few drawbacks, the biggest being that it is currently Win7 only. Since it’s a software solution, NVIDIA could support OS X and Linux as well should they choose, but the focus is definitely on Windows 7.)

After our AMD Mobility Radeon 5000 article, we heard from at least one source that it was the most negative of all the articles regarding the new ATI hardware. (We've heard the same thing regarding some of our NVIDIA mobile coverage in the past, so we figure we must be doing something right.) If you read the article, you’ll find that nearly all of our negatively revolved around the question of drivers. At the time, AMD told us they would have an announcement regarding updated mobile drivers in the near future, but it took almost six months from the time we first heard about NVIDIA's Verde until we actually got the first drivers, and even then those drivers were several revisions behind the desktop drivers. To say that we weren't holding our breath would be a gross understatement.

Now, with the new mobility driver program, AMD is set to clear the air and make it easy for us to recommend gaming laptops with Radeon graphics. That’s good, since right now the only DX11 hardware in a laptop will have to come from AMD. We expected something similar to NVIDIA's Verde program, but AMD has committed to something much more ambitious, and it all starts next month. If you’re looking to play Battleforge, DiRT2, Aliens vs. Predator, STALKER: Call of Pripyat, Battlefield: Bad Company 2, or Lords of the Ring Online with DX11 features enabled, AMD’s 5000 hardware is the only current mobile solution. It will remain so until NVIDIA gets around to announcing and shipping a new mobile architecture, which looks to be at least a month or two away, and likely more.

If you want to take the plunge, HP’s ENVY 15 is already available with the HD 5830, as is the new ASUS G73JH with HD 5870. Acer/Gateway also have the Aspire 5740G/7740G and NV59/NV79 with HD 5650 hardware. The only catch is that none of these products support switchable graphics, so battery life definitely isn’t going to be a major feature. If you’re more interested in performance, however, those are all some very potent gaming solutions. The ASUS G73JH in particular looks very impressive, with a Core i7-720QM CPU, the aforementioned HD 5870 1GB, and a whopping 8GB of DDR3 memory—all priced at just $1600 online. That looks to be a ton of mobile gaming goodness at an extremely attractive price, and thankfully we no longer need to worry about driver support.