What we really wanted to show you at this point was MSI's BIG Bang Fuzion, the eagerly anticipated motherboard based on Lucid's Hydra technology. Fuzion is not quite ready yet unfortuantely. In the meantime, we've been sent another board to review from MSI's Big Bang series called the P55 Trinergy. Not quite as exciting on paper, the Trinergy is basically the MSI P55 GD-80 on steroids. The testosterone in this case is supplied by a slew of tantalum capacitors and overclocking gadgetry topped off with NVIDIA's NF200 multiplexing features to provide additional PCI-E lanes for multi GPU setups.

MSI's angle for these additions is that they want to be seen as a high-end vendor, so they are ramping board features in a bid to be seen as a bona-fide entity that can deliver class leading products. One can't begrudge the aspiration, although high-end typically means high price too. In keeping with that tradition, the Trinergy has an MSRP of $349. Yes, that's right, $349 for a P55 board! That's the kind of money that will buy you a bells and whistles X58 motherboard that can do CrossFire X or Triple SLI natively. Not to mention that X58 boards in this price range tout similar overclocking centric features. We don't think much more needs to be said really.

Considering the Trinergy's intended audience, the primary focus of this review will be gaming performance in multi card configurations against other P55 boards, and of course the elephant in the room called X58. We're going to stick with the article format we first introduced in the MSI-GD 65 review. You get everything you need in terms of quirks and merits right here on the front page together with the final conclusion. 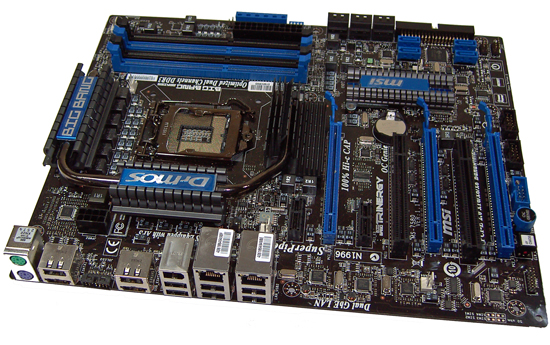 Those of you that read our MSI GD-65 review will recall a couple of things that Gary highlighted as needing improvement. First of all, sleep mode recovery at higher BCLKs not working on the GD-65 (190 BCLK and over). We're happy to say the Trinergy does not share this trait. S3 sleep mode recovered all the way to 215 BCLK (manual overclocking) for us on this board, which is as high as anyone will likely need it to work.

One of the more serious issues on the GD-65 was also the inability for OC Genie to work properly with some of our lab PSUs. It seems things have improved on this front too; repeated tests on the Trinergy have not shown any issues with our PSUs thus far. While we're on the subject of OC Genie, MSI's voltage defaults for automated overclocking routines came in very close to what we actually needed while using manual settings. Automated overclocking took our CPUs to 197 BCLK x 19 (3743MHz effective) with minimal fuss. This makes things quick and easy for those of you who don't like fiddling around with the finer sides of the BIOS; you just push one button and the board does the rest.

Our major concerns during the test period centered on MSI's bundled overclocking software misapplying and misreporting voltages. This is a situation that has plagued all of MSI's P55 boards to date. We finally received a fix early this week and are happy to report that the problem (on the Trinergy at least) has been isolated and "fixed".

Memory overclocking was another area needing attention; again we roll back to the GD-65 exhibiting similar issues. The problems mostly involved memory sub-timings failing to respond to manual changes and misreporting the actual value. MSI tells us they have managed to identify the problem and should have a BIOS fix for it shortly.

Lastly, we're still seeing a huge Vdroop enabled offset for processor VCore. Full processor load voltage is sometimes 0.13V below what you've set in BIOS (Voffset is around 0.03V while Vdroop is 0.1V). Most boards that follow Intel guidelines manage to keep this figure to around 0.05V, which one would expect the Trinergy and its over-engineered PWM circuit is perfectly capable of. The only option on the current BIOS for overclocking is to disable Vdroop, which results in voltage being raised by around 0.03V under full load.

CPU overclocking results were identical to all the other P55 boards when using the same components, so there's nothing special to report there, other than the board being a little harder to set up due to the memory related issues we pointed out above.

In short, everything else seems to work okay apart from a few niggles with regards to layout and accessibility. MSI choosing to go with the standard ATX form factor does limit access to some of the onboard buttons and headers when running a GPU in the last slot. Luckily, the board recovers well from failed overclocks so we did not find ourselves in a position where restricted access to the CMOS clear button became a hindrance.

Single GPU performance suffers by around 1-3% in most games due to the NF200, although we don't think that anyone who actually buys one of these boards will buy it to run a single GPU. Surprisingly, the multi-GPU results in our benchmarks were on par in places with X58 and only slightly behind in others.

A couple of the bundled extras are a nice touch, like the overclocking panel that allows on-the-fly changes to voltages and BCLK together with monitoring options. These features point towards MSI's intended audience for this board, namely the benchmarking crowd. The real plus point for MSI is that they now have boards to cater for all audiences, from the budget oriented to the spare-no-expense gaming and overclocking enthusiast.

In chasing enthusiast hearts, we hope MSI pays lots of attention towards improving and retaining board functionality on all levels. If there's one complaint users generally make towards MSI, it's been the lack of polish with regards to BIOS functionality or the workings of bundled software. Things are improving, but can still be off pace when compared to out-of-the-box functionality provided by other vendors at times.

Specifically with regards to the Trinergy, we'll finish off by saying we like some of what MSI is trying to do, but can't help feeling that what's on offer would be best served on an X58 refresh rather than P55, especially at the asking price.