When running in single-GPU mode, the on-die PCIe controller maintains a full x16 connection to your graphics card: 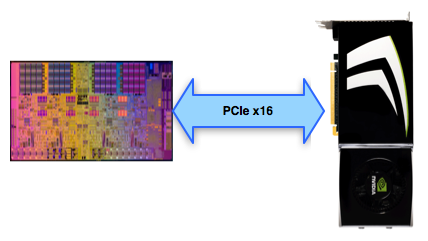 In multi-GPU mode, the 16 lanes have to be split in two:

To support this the motherboard maker needs to put down ~$3 worth of PCIe switches: 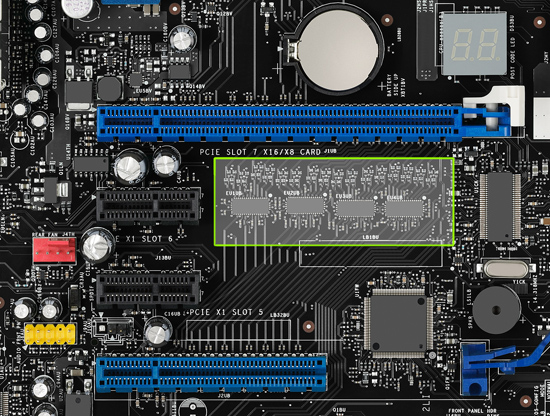 Now SLI and Crossfire can work, although the motherboard maker also needs to pay NVIDIA a few dollars to legally make SLI work.

The question is do you give up any performance when going with Lynnfield's 2 x8 implementation vs. Bloomfield/X58's 2 x16 PCIe configuration? In short, at the high end, yes.

I looked at scaling in two games that scaled the best with multiple GPUs: Crysis Warhead and FarCry 2. I ran all settings at their max, resolution at 2560 x 1600 but with no AA.

I included two multi-GPU configurations. A pair of GeForce GTX 275s from EVGA for NVIDIA: 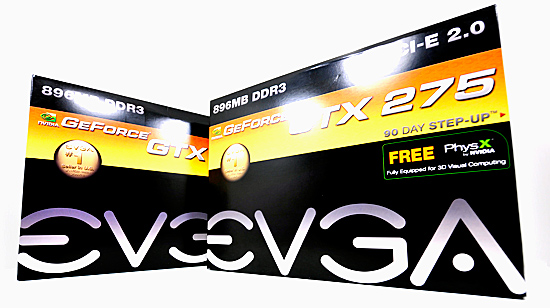 And to really stress things, I looked at two Radeon HD 4870 X2s from Sapphire. Note that each card has two GPUs so this is actually a 4-GPU configuration, enough to really stress a PCIe x8 interface.

First, the dual-GPU results from NVIDIA.

The important data is in the next table. What you're looking at here is the % speedup from one to two GPUs on X58 vs. P55. In theory, X58 should have higher percentages because each GPU gets 16 PCIe lanes while Lynnfield only provides 8 per GPU.

For the most part, the X58 platform was only a couple of percent better in scaling. That changes with the Far Cry 2 results where X58 manages to get 78% scaling while P55 only delivers 62%. It's clearly not the most common case, but it can happen. If you're going to be building a high-end dual-GPU setup, X58 is probably worth it.

Next, the quad-GPU results from AMD:

Again, what we really care about is the scaling. Note how single GPU performance is identical between Bloomfield/Lynnfield, but multi-GPU performance is noticeably lower on Lynnfield. This isn't going to be good:

Ouch. Maybe Lynnfield is human after all. Almost across the board the quad-GPU results significantly favor X58. It makes sense given how data hungry these GPUs are. Again, the conclusion here is that for a high end multi-GPU setup you'll want to go with X58/Bloomfield.

With all of our CPU reviews we try to strike a balance between CPU and GPU limited game tests in order to show which CPU is truly faster at running game code. In fact all of our CPU tests are designed to figure out which CPUs are best at a number of tasks.

However, the vast majority of games today will be limited by whatever graphics card you have in your system. The performance differences we talked about a earlier will all but disappear in these scenarios. Allow me to present data from Crysis Warhead running at 2560 x 1600 with maximum quality settings:

They're all the same. This shouldn't come as a surprise to anyone, it's always been the case. Any CPU near the high end, when faced with the same GPU bottleneck, will perform the same in game.

Now that doesn't mean you should ignore performance data and buy a slower CPU. You always want to purchase the best performing CPU you can at any given pricepoint. It'll ensure that regardless of the CPU/GPU balance in applications and games that you're always left with the best performance possible.

Turbo mode is enabled for the P55 and X58 platforms.