The Core i7 has its Turbo Mode. When only one core is active, power is shut off to all other cores and the active one can run at higher clock speeds. Even when all four cores are active, as long as the processor isn’t running too hot, the entire chip can run at a higher frequency. The default turbo speeds for the three i7s out on the market are listed below:

Turbo mode is an interesting concept because it allows end users to experience higher performance without ever having to even know about overclocking. In its first incarnation on Nehalem, Intel was quite conservative with how far they pushed Turbo. Given that our Core i7 920 had no problems running at up to 3.8GHz without increasing its core voltage, I’d say that Intel could stand to be a bit more aggressive with its turbo modes.

Note that in all of our multithreaded tests, the Core i7 has no problems running at its “turbo” frequency. In other words, the i7-920 runs at 2.80GHz far more frequently than it runs at 2.66GHz.

AMD unfortunately does not have a similar capability in its processors. Intel dedicated around 1M transistors to an on-die microcontroller called the PCU (Power Control Unit). The Core i7’s PCU tracks power consumption and manages clock speeds and voltages to ensure that the i7 always delivers the best performance when you need it, and the lowest power consumption when you don’t.

AMD didn’t go in and introduce any major architectural changes in the Phenom II X4 955 and most likely won't for a while. Instead, AMD is hoping to deliver a turbo-like feature in software.

The software is AMD’s Overdrive Utility 3.0 and the feature is called AMD Smart Profiles. 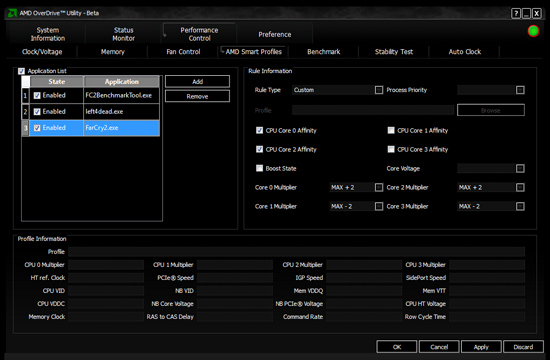 It works like this: you select an executable, and then using AOD3 you can set what cores that executable should run on and what clock speeds those cores should run at. AMD will have predefined profiles for various games but you can also create your own profiles.

Since the majority of desktop applications aren’t multithreaded, you’d stand to benefit from running two of your cores at a higher frequency and dropping the clock speed on the remaining two cores. That way you could keep power consumption unchanged, while improving performance.

There’s obviously more flexibility with AMD’s method than Intel’s and you could potentially get a much greater performance improvement. There are a couple of downsides. For starters, there’s no guarantee of stability but if you keep the overclocks mild and/or accompany them with a corresponding increase in core voltage then you can minimize that risk. The other obvious downside is that for the majority of applications and games you’ll have to create profiles manually. Honestly I’d prefer if the CPU did the work for me, but if you enjoy customizing your system then you’ll feel right at home with AOD3’s Smart Profiles.

AMD will add new profiles as time goes on. AMD does have plans for a turbo mode in future microprocessors, but we won’t see them until 2011.