Observers knew the pickings would be limited at this year’s PMA. After the rush of announcements at last fall’s Photokina there wasn’t too much left for PMA some 5 months later. However, the actual announcements turned out to be even thinner than anyone expected.

Notable no-shows were the Canon replacement for the $8000 Professional 1Ds Mark III, which Canon says has a sensor outperformed by the sensor in the $2700 5D Mark II, and Sony’s replacement for the A700, rumored to be called the A800. Both were expected at PMA and their absence started their own buzz among show-goers.

These are tough economic times around the world, and even the robust interchangeable lens digital camera market is seeing sales declines in the last few months. This is obviously having an impact on camera sales, and manufacturers are more cautious in the costly development of new models.

The one area where new models were not lacking is in the Olympus/Panasonic four-thirds sensor cameras. The only two new interchangeable lens cameras were both 4/3 sensor – although the Olympus E-620 represents the continuing evolution of the Olympus 4/3 line, and the Panasonic GH1 represents the High Definition Video promise of the micro 4/3 line. 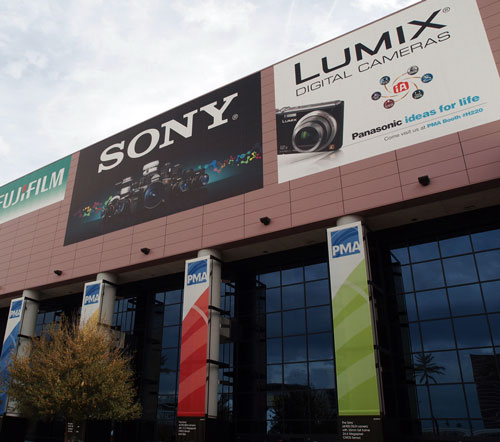