The oldest title in our test suite is still the most played. CoH has aged like fine wine and we still find it to be one of the best RTS games on the market. We look forward to the Tales of Valor standalone expansion pack this spring. In the meantime, we crank all the options up to their highest settings, enable AA at 2x, and run the game under DX9. The DX10 patch offers some improved visuals but with a premium penalty in frame rates. We track a custom replay of Able Company’s assault at Omaha Beach with FRAPS. 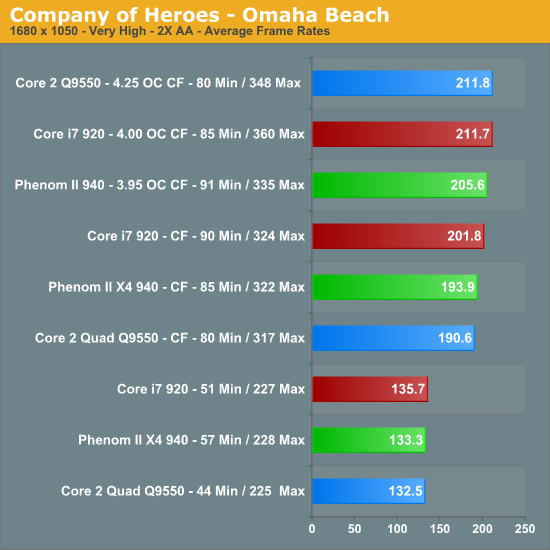 During testing, the Intel systems would generate minimum frame rates in the 23~24fps range on a couple of runs and then jump to their current results on the others. We noticed this in game play also; the Intel systems would hitch and pause at times. We would shutdown the game, clear the prefetch folder, and reboot. The game would operate fine in the next series of testing, though we still had stuttering in intensive ground scenes at times. We tried new images, different CPUs, memory changes, and the Sapphire HD 4870 cards with the same results. The Phenom II 940 had extremely stable frame rates in each test and action was very fluid during game play. 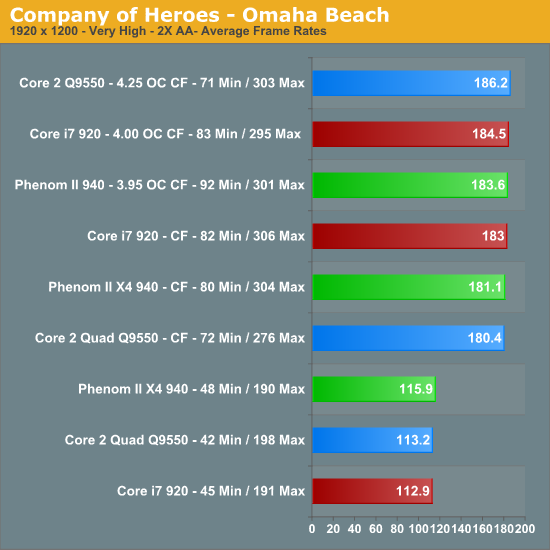 Now that we have discussed the numbers, what about the game play experience? As we alluded to earlier, the Intel platforms had problems with minimum frame rates throughout testing - not just in the benchmarks, but also during game play in various levels and online. We have not nailed it down yet, but we have noticed this problem consistently. In contrast, the Phenom II X4 940 had rock solid frame rates and offered the smoothest game play experience. The problem is very likely driver related in some manner (as the man who helped to start DirectX once put it, "the drivers are always broken"), but nevertheless this is an issue on the two Intel platforms.