We receive many requests for various test results in our articles along with questions as to why this was included but this was not. We love answering questions; it is the primary focus of our job. More often than not, we answer the right ones, sometimes out of sheer luck, but usually we try to cover all the bases within the time allotted. However, at times we are asked a question that causes us to stop and pause for a moment and wonder why that particular subject was not covered or even mentioned.

One such question arrived in droves after our Phenom II X4 launch articles a couple of weeks ago. We had to dig through many of the “You guys always favor Intel and NVIDIA...” comments (for the record we favor performance, quality, and value regardless of supplier) but after some sifting, we found a pattern in the messages. Many people wanted more information concerning gaming performance between a Phenom II X4 and similar Core 2 Quad system with specific setups. We covered these two platforms and more in our Phenom II launch article. A treasure trove of further information is available in our new Bench database, especially for those who do more than gaming on a computer. 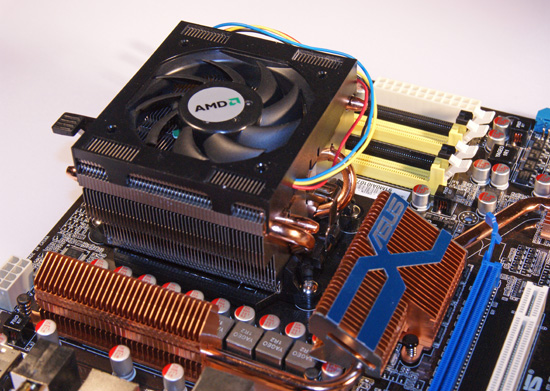 However, the one item mentioned numerous times was the lack of CrossFireX or SLI results compared to a similar Intel based system. True enough, we have not shown any multi-GPU results on an AMD platform in a long time, especially if you discount the Hybrid results on the uATX chipsets. One reason has been the lack of compelling CPU performance on the AMD side to drive a dual or triple card setup. The Phenom tried to take on those duties but with low clock speeds, it failed for the most part. We think the Phenom II will correct those problems or go a long way in addressing them. The staff consensus is that the best option for gamers is to purchase the single highest performing graphics card you can afford for your performance requirements and skip the multi-GPU solutions. This is especially true if you update your system frequently to keep up with the latest games.

Running multi-GPU systems for gaming has other potential negatives ranging from additional cooling and power supply requirements to additional GPU costs, and of course game engine support or more importantly, driver support. Multi-GPU systems typically require faster processors and system memory to reduce bottlenecks in the rendering/data pipelines. In addition, running a high-end CrossFire or SLI solution at resolutions below 1920x1200 is pretty much a waste of resources in most cases, so monitor cost also comes into play.

That short summary sounds like a typical economic report right now; it’s all bad and gloomy. Do not get us wrong, there is a market for CrossFire/SLI based gaming systems. Just go to the NVIDIA or AMD websites if you do not believe us. All kidding aside, for those who have the money, benchmark competitively, or want the absolute best gaming experience with all the game details enabled at ultra-high resolutions, then a multi-GPU solution is probably the correct way to go with the right processor choice. One exception is Crysis; we are still waiting for a GPU solution to run that game properly at very high settings with all the eye candy turned on. Who knows, we might even have a solution for that problem in 2010.

In the meantime we will try to answer a few questions today about CrossFire performance with the Phenom II X4 940. Of course, we might raise more questions than we answer. If we do, well, those will have to be answered at some point. Let us discuss the system setup and get to the numbers.