Now that we have some hardware in our hands and NVIDIA has formally launched the GeForce GTX 295, we are very interested in putting it to the test. NVIDIA's bid to reclaim the halo is quite an interesting one. If you'll remember from our earlier article on the hardware, the GTX 295 is a dual GPU card that features two chips that combine aspects of the GTX 280 and the GTX 260. The expectation should be that this card will fall between GTX 280 SLI and GTX 260 core 216 SLI. 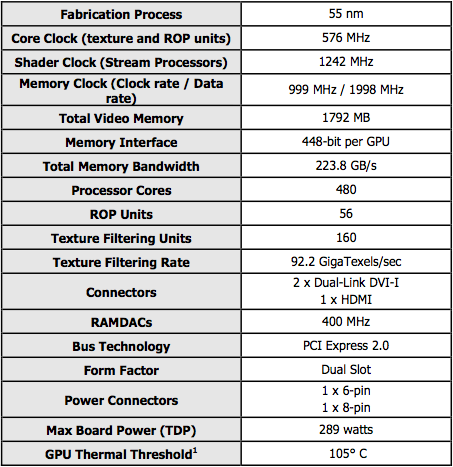 Our card looks the same as the one in the images provided by NVIDIA that we posted in December. It's notable that the GPUs are built at 55nm and are clocked at the speed of a GTX 260 despite having the shader power of the GTX 280 (x2).

We've also got another part coming down the pipe from NVIDIA. The GeForce GTX 285 is a 55nm part that amounts to an overclocked GTX 280. Although we don't have any in house yet, this new card was announced on the 8th and will be available for purchase on the 15th of January 2009.

There isn't much to say on the GeForce GTX 285: it is an overclocked 55nm GTX 280. The clock speeds compare as follows:

We don't have performance data for the GTX 285 yet, but expect it (like the GTX 280 and GTX 295) to be necessary only with very large displays.

For this article will focus heavily on the performance of the GeForce GTX 295, as we've already covered the basic architecture and specifications. We will recap them and cover the card itself on the next page, but for more detail see our initial article on the subject.