The AMD we used to know and love is back. As I write this sentence, most of AMD is still on vacation. By the time you read this, that will have changed, but it's such a stark contrast to what happened when the original Phenom processor launched. In the months leading up to Phenom, AMD treated it like it would be its hero. "Just wait", we were told. So we did. And Phenom was the biggest disappointment AMD had ever left us with.

AMD re-launched Phenom the following year, in 2008, with slightly better reception. The CPU evolved from something unsellable to an honest alternative to Intel's CPUs, just not one we'd recommend. Phenom ran too hot, didn't offer better performance, and offered some strange behavior with Cool'n'Quiet enabled.

While AMD was very excited about the first Phenom, we heard relatively little about Phenom II. The first time we heard the name was at AMD's Financial Analyst Day a couple of months ago, and then a month later we had a chip. AMD invited us to overclock the CPU, but I was busy working on another AMD story at the time and couldn't make it. I was done with flying around for AMD CPU launches; if Phenom II was going to be good, the chip would have to prove itself without an exotic locale or delicious Texas BBQ to sweeten the deal.

And good it is. 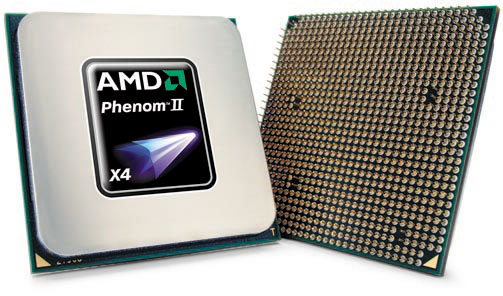 AMD is launching two new 45nm Phenom II CPUs today. There's the Phenom II X4 940 at 3.0GHz and the 920 at 2.8GHz. I'll go ahead and say that although it's a little long, I like the name. The II just works. I'm also feeling a bit chipper, so I'll go ahead and give you the conclusion now too.

Here's how it breaks down. The Phenom II X4 940 is usually the same speed or faster than Intel's Core 2 Quad Q9400, and priced similarly at $275. There are some areas where the Q9400 will be faster than the Phenom II X4 940, so if you happen to use an application that runs better on Intel hardware then you've got your choice made out for you. But for the most part, if you're buying a quad-core processor at around $275 today, Phenom II will tempt you.

Similarly, the Phenom II X4 920 is generally better than or equal to Intel's Core 2 Quad Q9300, and priced less (it's more of a competitor to the slower Q8300, but I didn't have one available for testing). The same stipulations detailed above exist here as well; there are some areas where Intel is going to be faster but for the most part our tests showed the Phenom II to be a better option.

Wait, what? An AMD CPU recommendation?

After over two years of us recommending Intel's Core 2 lineup almost exclusively, AMD finally released a real alternative, one that's not just similarly priced, but actually higher performing than the price-competitive Intel part. Over the coming pages I'll explain how.

Now Intel could've spoiled the party, it still has the performance crown and it could easily drive CPU prices even lower. But out of the kindness of its heart, there are no unexpected price cuts, no new product introductions, nothing to spoil AMD's day (yet). While I'll talk about what Intel may do to restore its leadership at these price points, today is all about Phenom II. If you've been waiting for an AMD to be excited about for the past couple of years, today is your day.

Competition is back. Let's get to it.