With the launch of the Radeon HD 4870, AMD showed us that they are not only still in the game, but they are back. Their hardware either out performed or was on par with NVIDIA hardware priced significantly higher. As a result, NVIDIA was forced to significantly adjust their prices downward to remain competitive. And, currently, they are competitive in terms of pricing and performance.

But in this business competitive isn't always good enough. AMD came out of the gate swinging for a knock out. And they did a good job of winning a significant amount of mindshare. They built a good product and priced it very aggressively at launch. While our concern is the current state of things, and our recommendation will be for the part that gives our reader the best value, that's not how every graphics card enthusiast sees it. The things companies do (like initially selling their hardware at way too high a price) can significantly affect the position of some enthusiasts.

That might be one reason NVIDIA went down the core 216 path with the GTX 260. A name more like GTX 265 would have been nice, and we already talked about how much we don't need dozens of parts all with slight tweaks and price differences cluttering up the market. But, the core 216 did help make NVIDIA's hardware more competitive (even if it didn't put it over the top). And more competitive is a good thing. Better competition does nothing but benefit the consumer, and we love to see it. If NVIDIA took that step because they want to win back some mindshare then that's fine with us. All we care about is what performs best in a price class, because that is what benefits our readers.

Well, it isn't just that the GTX 260 falls a little short. The fact is that the extra RAM really does make a significant difference in many high quality high resolution situations when playing current games. We didn't expect the gains we see here, and combined with the original stellar performance of the Radeon HD 4870, we have to say that we are impressed.

The Radeon HD 4870 1GB has the same number of GDDR5 chips on board, but the devices on the 1GB model are double the density of the 512MB part. 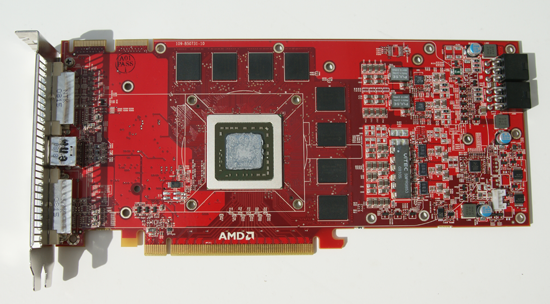 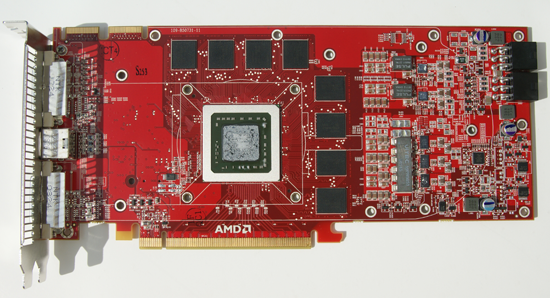 Yes, these are different parts. The top one is the 512MB version and the bottom one is the 1GB.

The 512MB card we have uses Qimonda GDDR5, while the 1GB model we tested has Hynix devices. As GDDR5 is still pretty new, it is likely that the delay in getting out the 1GB model of the 4870 had to do with delays in getting a high enough supply of high density RAM.

Anyway, we mentioned that the GTX 260 core 216 doesn't quite keep up now that the 4870 has twice as much RAM. Let's take a look ath exactly how short it falls, first in terms of how much performance we gain over the original model and then in absolute terms.