For the past couple of years NVIDIA has been telling us about how amazing its GPUs are at non-gaming applications. We kept seeing slides like this one that showed exactly how fast NVIDIA's GPUs were compared to dual and quad-core CPUs: 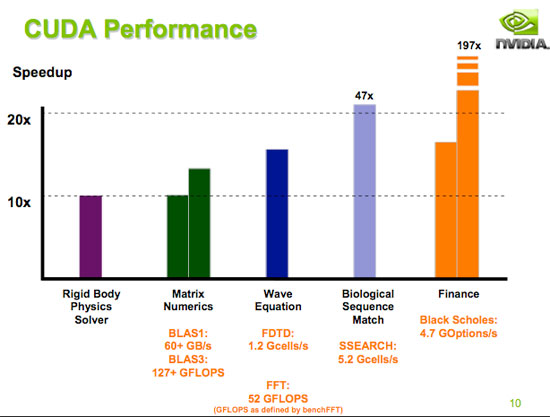 The performance advancements were incredible, NVIDIA was promising upwards of 100x gains over the fastest workstation CPUs. Unfortunately we couldn't get too terribly excited as most of these applications were far beyond the reach of the typical desktop user. Medical imaging and scientific analysis benefitted tremendously from GPU acceleration, but it's rare that a gamer with a $400 GPU is going to be searching for oil deposits in his/her spare time on the same machine.

Enter Elemental Technologies, the makers of an unfortunately named application called Badaboom (cue cheesy mobster promo videos). Elemental took one of the most time consuming tasks on the desktop, and offloaded a great deal of it to the GPU.

We've seen the benefits of GPU accelerated video decoding, especially with the recent transition to high definition video formats encoded in MPEG-2/VC-1/H.264. Blu-ray movies went from completely unplayable on many machines to a total non-issue with the advent of hardware HD video decode acceleration in GPUs. Both ATI and NVIDIA resorted to specialized hardware to provide support for the full decode pipeline of codecs like H.264, but the small addition of die space was more than worth it. It would take at least 8 of Intel's cores to have the same video decoding power of a single GPU outfitted with either ATI's UVD or NVIDIA's PureVideo HD decode engine - the GPU approach is simply more sensible.

As soon as we got GPU video decode acceleration we wanted to know if/when it would be possible to accelerate video encoding on the GPU. For years ATI and NVIDIA have been telling us that video encoding could be accelerated on the GPU, but for years we were given nothing more than that statement. With the latest round of GPU releases things seemed different. Alongside its GT200 GPU, NVIDIA sent out very early copies of Elemental's Badaboom GPU accelerated video transcoder. Badaboom promised the unimaginable - GPU accelerated H.264 video transcoding at many times the performance of the fastest Intel CPUs.

The initial beta showed promise: the performance gains were significant, but we couldn't really measure quality. Today we have a near-final build of Elemental's Badaboom and we're able to look at the full picture. Today it's more than just about performance, we're looking at the feasibility of the first mainstream GPU-accelerated video transcoding application.