We've been eagerly awaiting our Cooler Master UCP sample; unfortunately, it was delayed an extra three weeks during shipment by the carrier. We first saw this new series at CeBIT 2008 earlier this year, and other than the name (previously called Ultimate Warranty Protection/UWP) not much has changed. This power supply has some impressive features and specifications, and we were definitely interested in putting it through our test regimen to see how it actually performs. 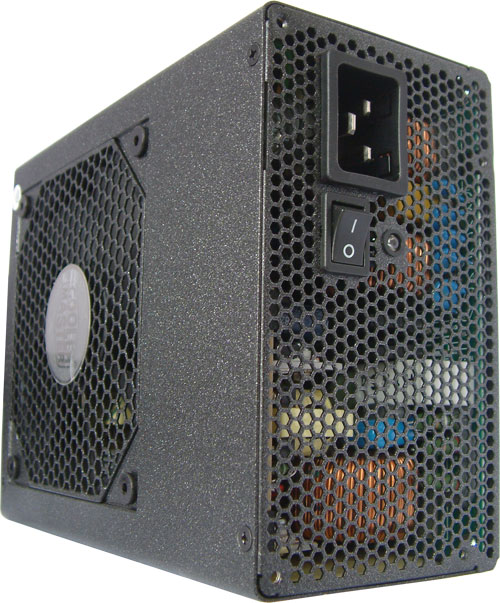 What's so special about Cooler Master UCP line? A press release points out the fact that they are the first company to receive an 80Plus Silver certification, which certainly generated some media attention. It's not that we've never seen an 88% efficiency power supply before, but the certification "guarantees" this level of performance to end-users. The difference between a regular 80Plus certification and an 80Plus Silver certification isn't all that great either, as it usually means only a few percent better efficiency overall. Even if you run the power supply constantly for years, you might only save $25. Still, it's a nice marketing tool, and there is an assumption that higher efficiency often means better overall quality. That may be true to a certain extent, but let's get to the rest of our testing before we come to any firm conclusions.

The 900W UCP that we received is quite long at 190mm (7.5 inches), with a 120mm fan toward the bottom-front of the casing (assuming a normal mounting position at the top of your computer chassis). Cooler master puts a large label on the top of the power supply, where it will be hidden in most computer cases. The 3.3V and 5V rails are rated at 25A, which is more than sufficient in our opinion. The 12V rails are the more important factor in modern systems, and here Cooler Master provides four 12V rails with different amperages. 12V1 is rated at 25A and is for the CPU, while 12V2 is only 20A and is also for the CPU socket. 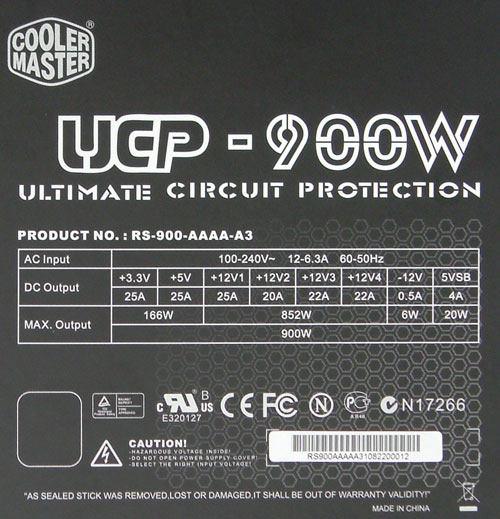 Going back to the main 12V rail, how much power a graphics card draws from the PEG connection and how much it draws from the motherboard x16 slot varies by design, so having so many peripherals dependent on the one 12V rail may not have been the best choice. This is another instance where a single large 12V rail can sometimes be a better solution. Regardless, very few systems will actually come anywhere near maxing out the available power, but if you plan on connecting several hard drives and overclocking a quad-core processor you might run into problems.