The iPhone 3G feels slightly bigger all around, but Apple sloped the edges more to mask some of the increase in dimensions. The back also protrudes out more, making it feel like a larger device in your hand, but not uncomfortably large.

The back is now glossy black or white plastic, although the white back is only an option if you buy the 16GB phone. Everyone I was in line with seemed to want a black iPhone 3G, I went for white as a tribute to the original iPod...that and it just looks different in my opinion, I’ve always had black or silver phones.

Ditching aluminum for plastic meant that weight went down ever so slightly (135g down to 133g). Compared to a Blackjack or most other smartphones, the iPhone 3G is definitely heavy, but it’s something you get used to over time.

The plastic back does make the phone feel less likely to slide out of your hand, whereas the old iPhone did feel slippery thanks to its brushed aluminum backside. I have no idea if this thing will actually fly out of my hand less than the original iPhone (which I have launched a number of times), it just feels like there’s more grip. 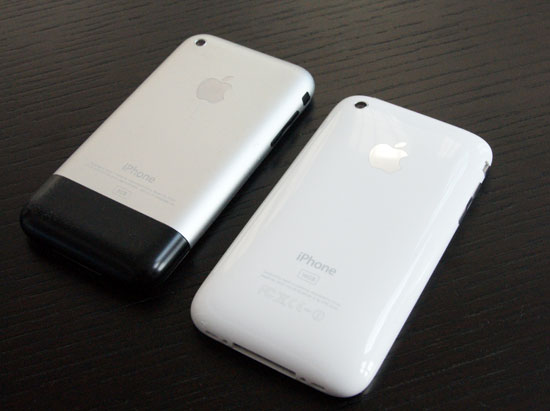 Out with the old and in with the new

The back does feel far less durable, and while my old screen never scratched, I do expect to mar the pretty white backside of this thing as I’m not big on protective cases. I tend to go through technology fairly quickly (my old iPhone is going to my dad), so I’d prefer not to deal with the added bulk of a case. 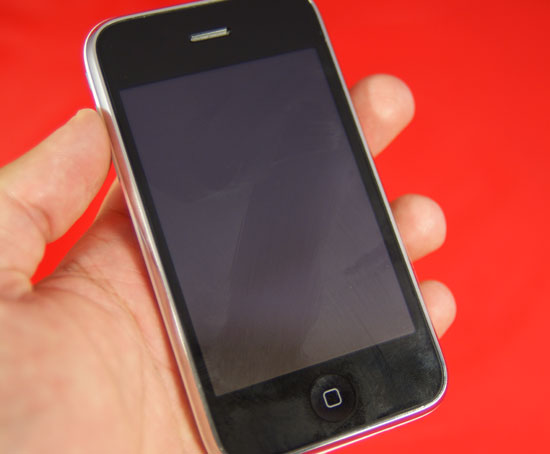 Yes, it still gets greasy as ever

The front of the iPhone remains largely unchanged, you’ve got a single home button and a large multi-touch screen. The screen itself does appear to be different from the original iPhone, but size, shape and resolution remain identical: 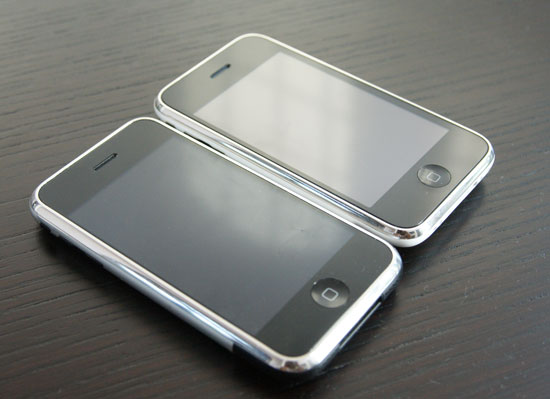 The original iPhone (left) vs. the new iPhone 3G (right) - note the slight difference in screens

The rest of the buttons on the iPhone 3G are identical in number and function to the first iPhone, you’ve got a power/lock/silence-calls button at the top right of the device, a ringer switch on the left side and a volume rocker. The buttons are now chrome and have a slightly more distinct feel during their operation.

The headphone jack is no longer recessed meaning you can use any 1/8” plug in the iPhone 3G. 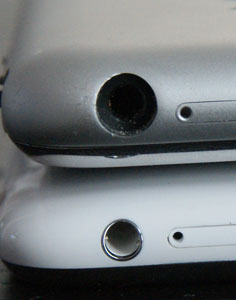 The recessed jack on the original iPhone didn’t bother me at first since I always used my iPhone earbuds. As time went on I’d forget my earbuds and have to use something else or if I’d find myself at someone else’s house without a way of plugging my iPhone into their receiver, it sucked.

The original iPhone looked and felt like something that was meant for 2007, and I’d say that the new iPhone continues the trend. It’s a very modern looking phone and I do actually prefer the way the new back looks, although I liked the smaller size of the older phone (admittedly I do have small hands, good for overclocking things).